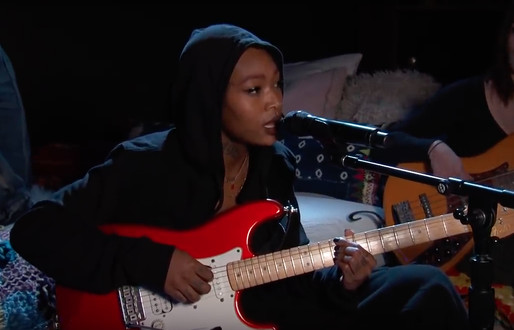 The Over It crooner needs some love right about now. Last week, Walker announced via social media she would be cancelling many of the tour dates for her debut album. She has been transparent with her fans about her struggle with social anxiety, and cited her disorder as the main reason for her need to shorten the tour. In her Instagram video, she explained:

“Unfortunately, I’m not going to be able to finish this tour because it doesn’t really coexist with my social anxiety and my introverted personality. But I really hope people understand and respect that at the end of the day, I’m a person. I have feelings, you know. I get tired. I get sad, and it’s just a lot. So I don’t want to lose myself for someone else. I want to give y’all what I can…”

The announcement was immediately met with criticism from internet haters who pressed her to finish the tour despite it taking a negative toll on her mental health.

I truly appreciate all the support and love. As you know, I have been very open about my struggle with social anxiety. I want to continue to be healthy and to make music for y'all, so I have decided to cut down some of the dates on the tour. I hope you all can understand. I'm grateful for every single one of you, and I hope that you understand that wellness/mental health is important. All cancelled dates will be refunded asap. Thank you. ??? Remaining Dates I’m playing: Nov 12 San Francisco Nov 25 Toronto Nov 26 Chicago Nov 27 Royal Oak Dec 2 Boston Dec 5 Philadelphia Dec 7 NYC Dec 8 NYC Dec 22 ATL

The frenzy became worse after this past Sunday. Walker was trending yet again after attending The Soul Train Awards to her chagrin. The trolls mocked Walker for appearing stiff on the red carpet, photoshopping her body into a series of memes that began to go viral. When she went up on stage to accept the award for "Best New Artist" that night, she was visibly uncomfortable with the attention she was receiving. Her voice was noticeably trembling. She quickly thanked her producers and expressed her gratitude for the award, then turned to leave the stage.

She was ridiculed by her so-called fans for her obvious awkwardness, suggesting that she was faking her social anxiety and couldn’t possibly be as socially anxious as she was saying because she is a famous entertainer. In an Instagram post, Walker defended herself saying, “I wasn’t even gonna go today cause I was [too] scared,” she continued, “by the time my name was called, I couldn’t get a speech out like everyone else from being so nervous & [I] was shaking…”

I wasn’t even gonna go today cause I was to scared, I was literally asking @lvrngram to just get me a wrist band so I could sit in the back alone in my reg deg clothes. When I got there I doged the red carpet and tried to get escorted through the back, finally getting to my seat I had to keep sneaking to pat my underarms from sweating, for no reason other than people were looking at me, I kept my arms folded and tried not to be seen. by the time my name was called I couldn’t get a speech out like everyone one else from being so nervous & was shaking BUT I pushed through my #socialanxiety today and I’m really glad I did ..cause the soul train experience is something any true music lover will never forget?

The sheer fact that Walker feels the need to defend herself to all of the cruel comments she’s receiving online is a sign she is struggling with her newfound fame. She became a sensation practically overnight. Her debut studio album earned the biggest streaming week ever for an R&B album by a female artist. It’s a lot to adapt to when you’re just 23 years old. Summer Walker is not a natural performer. She is a singer-songwriter. It is not atypical for singer-songwriters to hide away from the limelight.

Kate Bush has famously gone on tour only twice in her entire career-- once in 1979 and the second time being in 2014 for a short lived residency. Adele, Lana Del Rey, and Lorde have all taken extended time out of the public eye to work on their music and live their private lives without interruption from pesky paparazzi. Hell, we’ve practically given up all hope of Frank Ocean ever touring or performing live ever again.

For the most part, we as their fans have allowed them their privacy. We understand that they are not the kinds of performers who can bear with all the attention more mainstream pop stars handle professionally. So why haven’t we given Summer Walker the same respect to her privacy? Is it only because she makes twerkable R&B anthems, or is it because she is a black woman who does so?

Not all black female artists are the same because not all black women are the same. We are accustomed to seeing strong black female performances in popular culture. From Viola Davis and Kerry Washington stomping around government buildings in heels and perfectly straightened hair on national television, to Lizzo dancing on a stage in a glittery leotard and playing the flute with perfect pitch. It’s wonderful to see black women owning their strengths without fear. But we keep pushing them to the limit. We expect our black female artists to do the impossible, and somehow they deliver. Not all of us feel flawless like Beyoncé or savage like Rihanna. In fact, neither of them feel that way every single day either. They’re not perfect.

The myth of #BlackGirlMagic is just that-- a myth. Black women are not these glamorous superheroes who are impervious to shame, awkwardness, pain, fatigue, etc. Black women are humans. We struggle with mental illness too. We are anxious. We are shy. We are quirky. We are weird. We make mistakes. We fuck up. Black female empowerment does not just stop at highlighting our strengths, but by also acknowledging our weaknesses and allowing us the space to better ourselves at our own pace. That is what every person, whether they are famous or not, deserves.

Summer Walker is at the beginning of her career. She is growing into her sound and her star power. She is learning how to be in the industry, and we should allow her the same freedom to do so without the fear of losing her career altogether. We hope the trolls give Walker the same respect they would expect for themselves. And to Summer Walker-- keep growing and doing you, boo!

In Her Final Show, Mitski Confronted The Spectacle of Performance