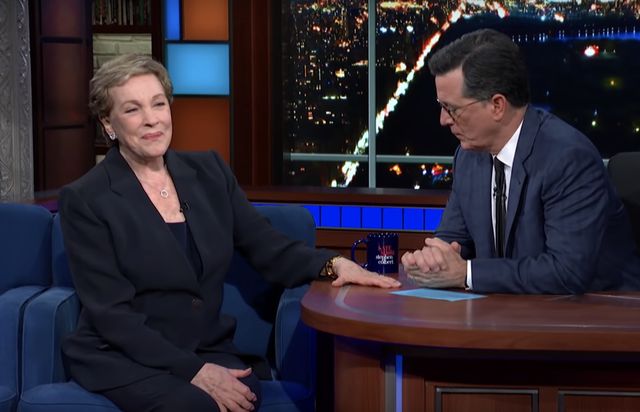 Last week, legendary actress and magical angel Dame Julie Andrews promoted her new book, Home Work, as a guest on The Late Show with Stephen Colbert. In her book, Andrews talks about going to therapy after separating from her first husband. “I wanted that [clarity] for myself, and I didn’t feel I had it,” she said in the interview. “So I went and got into it, and it saved my life, in a way.” When Colbert asked why she would want to share that, she replied, “Why not, if it helps anybody else have the same idea?” From that, she got more applause, as she very much deserves.

Julie Andrews isn’t the only celebrity who has been vocal about therapy and how important it is. Rather than be looked at as a sign of weakness, public figures like Michelle Obama, Catherine Zeta-Jones, and Kerry Washington believe asking for help is a sign of strength. They have all addressed the necessity of therapy and how they’re happy to discuss their well-being if it means others will listen and work to take care of their own mental health. This is great! According to HuffPost, “experts say public figures who speak out about therapy make it more likely that fans will go.” However, it is worth noting that public figures and celebrities alike, can afford to praise therapy, because they can actually afford therapy. In 2017, NPR noted “In 2015, behavioral care was four to six times more likely to be provided out-of-network than medical or surgical care.” Also, for everyone else, admitting you have a mental disorder can cost you a job or even your image. There are so many places where it’s still a taboo subject for people to be able to admit that they need help taking care of their well-being.

As stated in Our World in Data, over 970 million people globally have a mental or substance use disorder, and they still remain widely unreported. There are certain countries that don’t even talk about the possibility of their citizens or certain genders having depression or anxiety or any other mental health disorder. Celebrities talking about their own mental health struggles and going to therapy can sometimes be the only way some hear about the advantages of tending mental health.

What’s important about Julie Andrews talking about therapy—aside from making the queen relatable—is that she comes from a generation that has almost never discussed mental health and therapy. Mental health has been a taboo subject in that age group and is still taboo subjects today. That generation—and the generations before—avoiding the conversation have created a sort of domino effect to all generations younger than them.

Having people like Julie Andrews discussing therapy is a beautiful thing. She’s loved by every single generation, from Mary Poppins and The Sound of Music fans to The Princess Diaries (The Princess Diaries 2: Royal Engagement and the upcoming third installment, too, obviously). This makes her someone that might be able to help every age group feel more comfortable talking about the things society has led us to believe are uncomfortable subjects. Pretty weird how society is more comfortable talking about a family of singers hiding from Nazis that have taken over their country and not about how our mental health is getting worse. I’m sure Dame Julie Andrews can attest to that.

The Woman Behind "Reviving Ophelia" Reflects On Teen Girls' Mental Health, Then & Now