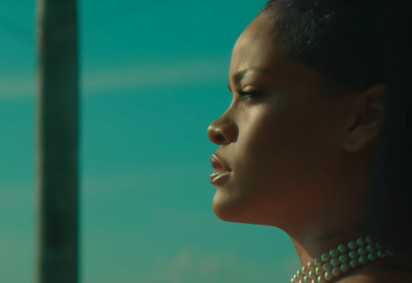 Over the past weekend, Rihanna posted a series of slow-motion videos set to music in an undisclosed tropical location on her Instagram and Twitter promoting her makeup brand Fenty Beauty. For the most part, the internet was obsessing over each post that featured how glowy the Barbadian goddess looked on her vacation—my personal favorite was the slow-motion video of her walking in a bikini and a sheer robe with a perfectly rolled blunt in her mouth. The song choice for one of her videos, however, caused quite an upset with her fans.

In the background of video showing off her new collection of lip-glosses for Fenty Beauty, Rihanna chose a duet performed by her problematic ex-boyfriend Chris Brown and the artist H.E.R. Many of her fans, including myself, were upset and confused by her seemingly cryptic signal to Brown that she supported him in any capacity—whether she simply liked his new music or to show she has long since forgiven him for the tumultuous and violent relationship she shared with him a decade ago. Other viewers, one of them being Chris Brown himself, saw the inclusion of his song in the video as a sign that he was now off the hook for his past transgressions. If Rihanna has no ill feelings towards her ex, then the rest of us can forgive him too, right? I’m afraid not.

None of us can forget the incident in February 2009 that left the then 21-year-old Rihanna very badly bruised and beaten by Brown and the media frenzy that would follow. I was just eleven years old when the story hit the headlines. My friend group was split between girls who rallied behind Rihanna and swore off of Brown’s discography for good, and girls who took Brown’s side because of their physical attraction to him and love of his music. It seemed the rest of the world mirrored this divide as well. But perhaps the question is not whether or not we should separate the man from the music on Brown’s part, but whether or not we should separate Rihanna’s private and personal life from her public persona.

After 2009, the two stars took vastly different paths in their careers. Rihanna went on to become one of the most highly respected entertainers and business moguls in the world. Throughout her career, she has sold over 60 million albums, has had 14 number one singles, starred in films, established her own fashion and beauty brands, and founded her charity which works to fund education and healthcare programs for impoverished communities. Chris Brown is-- well, he’s still Chris Brown. Even if we believed men who were once abusive could be redeemed and change for the better, it’s clear that Brown has continued the same patterns of chaotic behavior long after that fateful day. There’s the time he threw a chair out of a window on the set of Good Morning America, his very publicly turbulent relationship with model and actress Karrueche Tran, and a slew of assault allegations from various men and women over the years. So for anyone still questioning their loyalty to the singer, don’t bother waiting for Rihanna’s word for it. His record speaks for itself.

I am now the age Rihanna was then when all of this happened. I cannot imagine the physical and emotional pain enduring such abuse by the hands of someone you love would have on you-- especially not in the public eye. Pictures of her disfigured face were plastered on every television set and newspaper at the time. The conversations that were had about the two’s relationship dominated the news cycle for the entire year. The incident became the butt of jokes alluding to domestic violence by the general public. I am sure Rihanna did not, and still does not, want to be reminded of that day. And yet the media tried to define her by that singular moment. No one can understand what she was going through. No one but she and Brown can really understand their relationship to each other. Even as someone who abhors Chris Brown for this incident and others, I cannot pretend to understand how Rihanna processed her emotions from that day forward. None of us can.

I remember in 2009 when my mother took this scandal as an opportunity to sit my friends and me down and explain to us the gravity of the story we were witnessing on the news. She told us the repeated, yet, important speech that we should never let any man touch us in any way we didn’t ask for and stressed to us that physical violence from a man upon any woman is wrong no matter the context. But then she unexpectedly opened up to us about her own experience. My mother grew up in a home where physical abuse was the norm. She, like my grandmother, was a survivor of domestic violence herself. The man who abused her was the father of her child (my older brother). She finally escaped him and never looked back for quite some time. But eventually, she learned to forgive him. She even formed a sort of friendship with him. They had both grown significantly since they had parted ways. My mother had a completely different life from the one she lived with him back then. She was so young when it all happened, and as an adult woman, she could finally see the man who once terrorized her for who he truly was deep inside-- a weak, insecure man who only knew how to express his pain through violence.

For many women of color, patterns of abuse are often normalized. Most of the older women I know have survived some form of abuse, but they do not allow anyone to victimize them for it. It is not that they are denying what happened to them. They just don’t want their strengths to be diminished by the abuse. They do not want to be defined by their pain. Doing so only allows their abusers to win. Rihanna herself has discussed the pathology of violence in her own family. Her father was abusive towards her mother growing up, and he struggled with substance abuse. The singer’s life story is a shining example of a resilient woman who refused to let her circumstances stop her from achieving her dreams. At 31, she’s at the height of her career and is currently boo'ed up with Saudi billionaire Hassan Jameel (hopefully all of this activity doesn’t keep her too busy from finishing that reggae album we’ve all been waiting for). She’s never conformed to the rules. And that’s why we love her. Rihanna made it cool to be authentic. Even if we don’t understand her choices sometimes, we respect her for being true to herself without censorship. Her playing a Chris Brown song in the background of her video is not a pass for all of us to forget about his wrongdoings. It is a sign to us that she has completely eclipsed him. She cannot be phased by him or anyone who reminds her of her painful past. She’s too busy taking over the world.

header photo screenshot of Needed Me music video via YouTube