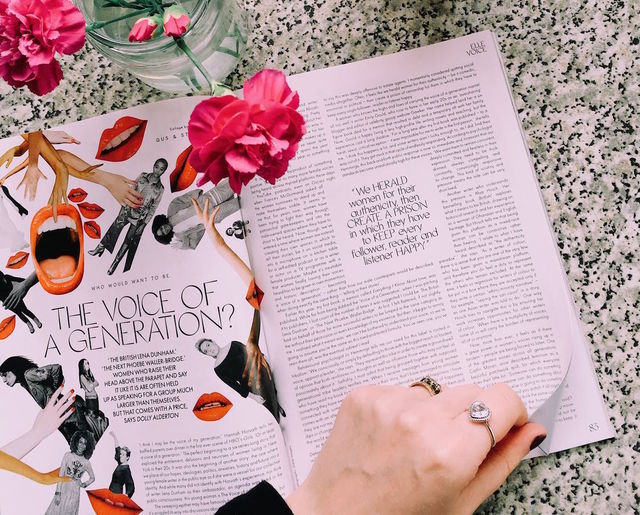 The Trends! The Celebs! The Dating Advice!

While the ways in which media communicates to adolescents has transformed, being a teenager is still rough. Worries about the number of people showing up to your party have been replaced by worries about the number of ‘likes’ and followers you have on Instagram. And as technology and algorithms continue to advance, increasing the subsequent demand for the latest information, print media has taken a hit. Many of our teen staples like ElleGirl, YM, and Teen Vogue have either folded or made the complete transition to digital.

But the rise of the restless 24-hour news cycle and the immediacy of ‘like/subscribe/share’ has spawned a cultural yearning for nostalgia and its ensuing feelings of stability and hope. For those teen-mag enthusiasts mourning print’s absence, the IG account @thankyouatoosa is your perfect resource for the good, the bad and the ugly of youth-focused media from the 1990s’ and 2000s.’ Think kitten heels with jeans. Distressed denim cargo pants. Room makeovers. Color tinted sunglasses. Boy bands. Laguna Beach. The Hills. It-Girls. It-Boys. Celebrity first kiss stories. And, dating advice that’s a little well... dated. Aside from being a fun scroll through memory lane, on @thankyouatoosa highlights the ways in which cultural attitudes have shifted and teen content has progressed and how it has stayed the same.

A wild throwback by @tiawilliamswrites that quotes TEEN ME (“Nineteen-year-old Casey Lewis, a magazine journalism major at the University of Missouri...” on page 3, also lol that “magazine journalism” even existed as a major ?). Teen Vogue, 2007.

Important intel if you’re headed to the Rockaways this weekend... Seventeen, 1999.

Would love to know how many fights with parents that @jlo skirt (if you can even call it that??) inspired. CosmoGirl, 2003.

Described as an “ode to teen magazines,” @thankyouatoosa is the brainchild of NYC-based writer, teen-mag enthusiast, and now, practically bona fide archivist and historian, Casey Lewis. While growing up in a small town pre-internet, magazines were Lewis’ “lifeline to a larger world.” “They were my bible," she states. "The magazines I grew up reading certainly weren't perfect, and they really shaped me as a person, for better or for worse. But I wouldn't have ended up as a writer in New York if it hadn't been for the Teen Vogues and the Seventeens and the ElleGirls.” Casey interned at Teen Vogue in college. After graduation, she went to work for Alloy, the media company which published books like the Gossip Girl series. “Very OG teen media.” Lewis returned to Teen Vogue and also worked for MTV before cofounding Clover Letter, an e-newsletter for teen girls, in 2016.

But by 2018, youth-focused media was in a depression. “Last year it seemed like teen media couldn’t catch a break,” Casey recalls. Rookie Magazine had just folded and other teen magazines were announcing the end of their print runs.
During a trip home for the holidays, she revisited her extensive collection of magazines, and “snapped pictures of a few of the funnier spreads.” Back in New York, she started the Instagram “on a fluke.” “I really don’t even know what compelled me. It seemed like a good distraction, and you know what? It was! But it’s become so much more than that.”

Prettyyyy sure I had the exact same @Abercrombie sweatshirt (but I wasn’t cool enough to wear mine with heels). Seventeen, 2005.

The account is dedicated to Atoosa Rubenstein, founding editor of CosmoGirl! and former editor-in-chief of Seventeen. For many readers including Casey and myself, the authenticity Atoosa brought to the gloss of magazines was what set her apart from other editors. “Atoosa was so unapologetically herself, and that felt really radical to me,” raves Casey. In her editor's letters, Atoosa shared stories of awkward, embarrassing, and sometimes painful moments of her teens. She spoke about feeling misunderstood at school and growing up in an immigrant family in addition to the saga of maintaining out-of-control curly hair. As a lonely teen, I found solace in the stories and her creativity, glamour and fierce work ethic helped me see a light at the end of the tunnel. Atoosa was the cool big sister reminding you that things were going to work out. Casey shares similar sentiments, “I had frizzy hair and was just constantly uncomfortable in my skin. Because of her, I believed I, too, could be a top editor at a magazine when I grew up. She allowed me to dream big!”

Not *quite* as satisfying as watching Homecoming (again) but close. Seventeen, 2003.

Concerning her extensive collection of magazines, Casey jokes, “I now feel forever indebted to my parents--for many things, of course, but especially for not throwing away my hundreds of teen magazines. It's been more than a decade since I've lived in my parents' house, and they've sat pretty much untouched. I had them ship me a ton (literally, the box probably weighed a ton), so now I have a bookcase full of them here at my apartment in Brooklyn. I hope I never have to move.”

Casey loves that the teen media that’s still around has gotten much more inclusive but is disappointed in how few outlets exist for teens. “I think that's something about a certain generation of women, or at least a certain generation of women writers in New York--we all grew up worshiping Atoosa and then ended up here ready to take on the media world, only to see that world crumble below our feet. Maybe we should all band together to start something new.”

Whether she knows it or not, Casey is creating something new that’s spawned from what she originally loved about magazines; finding a supportive community through exchanging ideas and dialogue. When I reached out to Atoosa regarding the account, it was evident that her readers continue to make an equally profound impact on her like she for us. “Casey just blows my mind," she enthuses. "Obviously, the thankyouatoosa Instagram and tiny letter were and are super flattering and make me feel great. But what makes me feel best of all is to talk to Casey and other young women like her who are just as brave, bright and kind as I hoped they would be."

If you haven’t been able to get your hands on an advance copy of @laurenomics’ book of the summer (same), console yourself with this early byline. And really, buy yourself the strappy sandals. Seventeen, 2000.

The baton has been passed and those who once got their tips from Atoosa are now giving them to her. "I also love reaching out to various former readers to get their help now. Like, I'm not sure I would have figured Instagram out without Casey. That poor girl - I would text her the dumbest questions (and I hope she kept them so she can publish them one day to tease me). But it's not just Casey. I have one former reader who is super fit who I've asked for advice to help me get back into shape after I had a chronic illness. I have former readers who help me when they come across me whether I'm shopping, at a restaurant or anywhere else they work. It's really a full circle moment. I was there for them. And now they're here for me when they can be and it means so much to me.”

What The Tweens Were Into: 2000s Edition

15 Photos Of '90s Teens In Their Natural Habitat — Their Bedrooms