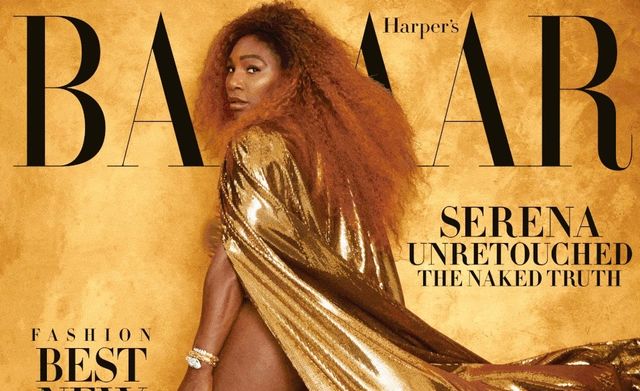 Yesterday, Harper’s Bazaar published a personal essay by Serena Williams, in which the tennis star discusses the controversy surrounding her US Open loss to Naomi Osaka.

Williams recalls the series of events:

Umpire Carlos Ramos issues a warning, claiming he saw Williams’ coach give her a signal from the stands. Williams replies that she was not receiving coaching, she has established no code with her coach, and she does not cheat. A few moments later, Williams loses a point and, frustrated, breaks her racket against the court. Ramos issues a second code violation and a point penalty. While taking a water break, Williams speaks to Ramos. “You owe me an apology,” she tells him, “I don’t cheat.” Articulating further that he has stolen a point from her, Williams tells him, “You’re a thief.” That’s it.

As she returns to the court, the official leans into his microphone and proclaims, “Code violation: verbal abuse.” He announces a game penalty, meaning that Williams is penalized not just one or two or even three points, but an entire game. It’s an incredibly rare punishment that left the entire stadium humming with confusion and disbelief. Issuing a penalty of that severity during a grand slam final was—until that moment—unprecedented.

Within minutes, the match is over. But in her essay, Williams meditates on the enduring tug of indignation and frustration, despite accepting the loss of the championship: "In the end, my opponent simply played better than me that day and ended up winning her first Grand Slam title. I could not have been happier for her. As for me, I felt defeated and disrespected by a sport that I love." She spends the days following the match re-living those crucial moments and wrestling questions about double standards in sports.

Evidence of those double standards is everywhere. Nick Kyrgios told the same umpire his officiating was “f***ing bullsh*t” a year ago. He only got a warning. Novak Djokovic clashed with Ramos on multiple occasions. He threw his racket onto the ground and even gestured as if about to belt a ball at Ramos’ chair. He only got a warning. Dominic Thiem crushed more than one racket against the court, and headlines glorified him for offering shattered rackets to fans.

When women players display justified anger, it’s punished. But censuring women’s anger—classifying it as inappropriate or offensive or excessive—is about more than double standards. It’s an attempt to question women’s capacity to perceive their own reality. Because to deny anger is to dismiss that which makes us angry. The logic: if you ignore (or erase) the initial transgression, then a reasonable reaction to that transgression can be framed as an attack in itself.

Anger serves a purpose. It sharpens our awareness of inequity and motivates us to address it. After several sleepless post-match nights, Williams decided to take action. But she didn’t regret her anger. Instead, she was saddened by how the controversy impacted her rival, Naomi Osaka, so Williams reached out to the young champion directly.

In her letter, Williams underscores that this story is as much about antiblackness as it is about sexism. She told Osaka how disappointed she was to witness the media pit two women of color against each other. And she emphasized her support for the 20-year old athlete: “I would never, ever want the light to shine away from another female, specifically another black female athlete. I can’t wait for your future and believe me I will always be watching as a big fan.”

So while women’s rage is in the spotlight right now, we still need to ask ourselves: Who, exactly, gets to be angry?

Tags: Serena Williams , US Open , tennis , sports , double standard , anger
Support Feminist Media!
During these troubling political times, independent feminist media is more vital than ever. If our bold, uncensored reporting on women’s issues is important to you, please consider making a donation of $5, $25, $50, or whatever you can afford, to protect and sustain BUST.com.
Thanks so much—we can’t spell BUST without U.