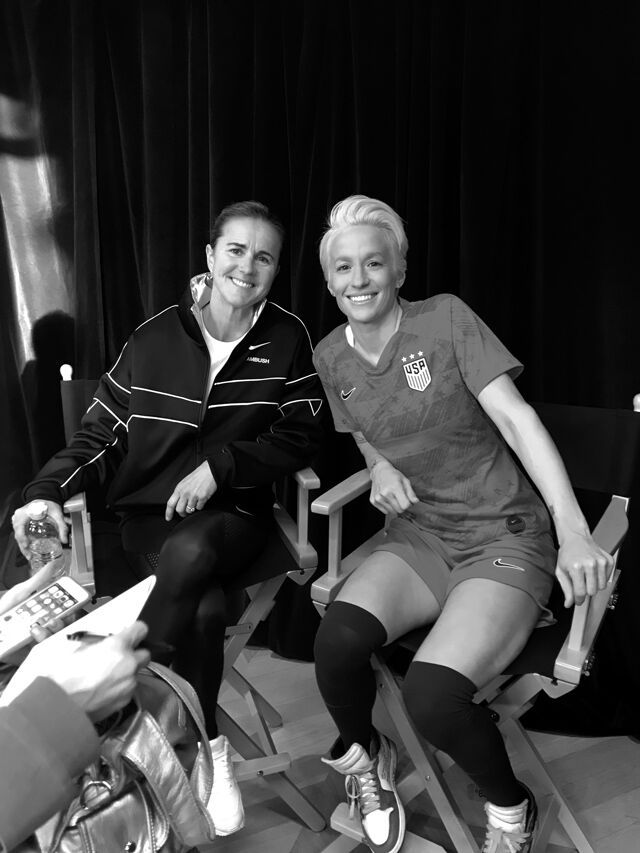 Both Brandi Chastain and Megan Rapinoe are women’s soccer royalty. Here, they discuss why they love the sport, what women can do to help support them, and how to “share the shine.”

Even if you don’t know anything about sports, or soccer, or women’s soccer—you know Brandi Chastain. She’s the one who, after the American soccer team won the 1999 Women’s World Cup, fell to her knees and ripped off her jersey, revealing a black sports bra and six-pack abs. It’s an image that remains inspiring to this day, but wasn’t without its detractors. Some thought that a lady on the field in, heaven forbid, a sports bra was disrespectful to the game, even though men rip their shirts off on the field on a regular basis. Chastain paid them no mind, and helped her team win two World Cups and two Olympic Gold Medals before retiring in 2010. Now 50, Chastain spends her time coaching girls’ soccer.

Consider Megan Rapinoe the Brandi Chastain of today. In 2010, she made a last-minute goal in a game against Colombia that helped the U.S. team win and qualify for the World Cup, after which Rapinoe did her own Chastain-like move by picking up a mic and belting out “Born in the U.S.A.” on the field. Fiercely outspoken, Rapinoe is a mega-star in the world of women’s soccer, who uses her platform not only to inspire and energize girls and women, but also to advocate for LGBTQ causes. A native of California, the 33-year-old has been playing sports professionally for 10 years, and helped the U.S. Women’s National Soccer Team win the World Cup in 2015, and Olympic Gold in 2012. This summer, Rapinoe will be headed to France to play in the 2019 Women’s World Cup (the tournament is held only once every four years), where the American team will defend their title of world champions.

Rapinoe recently made front page news for her moves off the field. On March 8, 2019, International Women’s Day, she, along with all of the other members of the U.S. Women’s National Soccer Team, filed a lawsuit against the United States Soccer Federation, charging them with “institutionalized gender discrimination.” As well they should. Because, despite the fact that the women’s soccer team has won three World Cup championships to the men’s zero, played almost 50 percent more games and won twice as many compared to the men,  and, last year,  brought in more revenue than the men’s team, they are paid only about a quarter of what the men make. It’s a fight that’s been going on for a long time—just a few months after her famous kick, in 2000, Chastain  and her team boycotted a game to protest their low pay. But hopefully, in the era of #TimesUp, these players will finally get what they deserve.

I had the distinct honor of interviewing both of these legends while they were in Paris for Nike’s unveiling of the new Team USA uniforms, along with the uniforms of many other countries. (Nike is sponsoring 14 women’s soccer teams this year). Since I’ve never played soccer—or any sport, really—I was curious about what the game meant for these women, who have devoted their lives to it. I also wanted to know what women can do to help the team in their effort to achieve equal compensation. Because when women support other women, all women benefit.

I’ve heard both of you say that the first time you tried soccer, as a girl, it was “love at first kick.” I’m curious about that.

Brandi: The first time I kicked the ball, it was like, “Dang that felt really good.” I was a really active child, and [soccer] just felt right—it filled me every time I went out to the field.

Megan: It’s hard to explain. [Playing soccer] just is within me, there’s nothing that needs to be motivated or talked into or anything like that. It’s actually just part of who I am, just as other parts of me are.

As a non-athlete, can you help me understand how playing soccer gives you joy in your lives?

Megan: The ability to think something and feel something and have a physical expression of that, is totally intoxicating and addictive.

Brandi: I’ve had many moments like this, and they’re all incredibly precious—like, say I’m on the field with Megan, and we connect without talking or touching, and we look at each other, and I go “mm-hmm” and she goes “mm-hmm,” and we know we’ve got each other. I have the chills right now [thinking about it]. There’s this unbelievable connection you have with your teammates in moments where they know exactly what you’re feeling, and you know exactly what they’re feeling. I love scoring goals, I love defending, but there’s nothing in soccer better than that for me.

Brandi, is there any advice you’d like to give Megan?

Megan, is there anything you want to ask Brandi?

Megan: I would just say thank you. It’s funny, I feel like the same person as a lot of the generation [of players] before me. Unfortunately, we’re still fighting, but for more and different things than they did. Everyone talks about the winning culture and the competitiveness, but that is not the best thing about the [U.S. Women’s National Soccer] team. They were the best thing about the team, the fight they instilled in everyone.

Megan, you were 14 when Brandi won and ripped off her shirt. Do you recall watching that?

Megan: Vividly! I mean, talk about being unapologetically yourself and emotional.  It was just so fucking cool, it was like the coolest fucking thing anyone could have done. [To Brandi] You always played like that; you were always willing to try shit, and put yourself out there. You were willing to just do it, and that’s where we learned it from.

Do you consider yourselves feminists?

Megan: Of course. Yes. It would be against our self interest not to.

Brandi: I guess you’d have to give me your definition, but if it means I’m a lifelong ambassador for women and young girls? Absolutely. Do I believe in the power of females? Absolutely.

Do you get exhausted, from not only having to do the work to be a top athlete, but also having to fight for your rights as a female athlete?

Brandi: I’m tired, and I’m frustrated that we have to have the same conversation again, but I’m grateful that there are women who are committed to the fight, and have the courage to do it.

Megan: It is exhausting and frustrating to constantly have to explain and over-prove your worth, time and time again. But I suppose to be a woman is to be exhausted.

Megan: Yeah; but it’s what has to be done, and I’m certainly not going to take a nap if I can fight. They’re not going to bleed us out by exhaustion or any of that.

Is there anything that women can do to help your fight?

Megan: Come to games, watch it on TV, tell people about it.

Brandi: Start a club. Start a group. Get your friends together to watch the games. 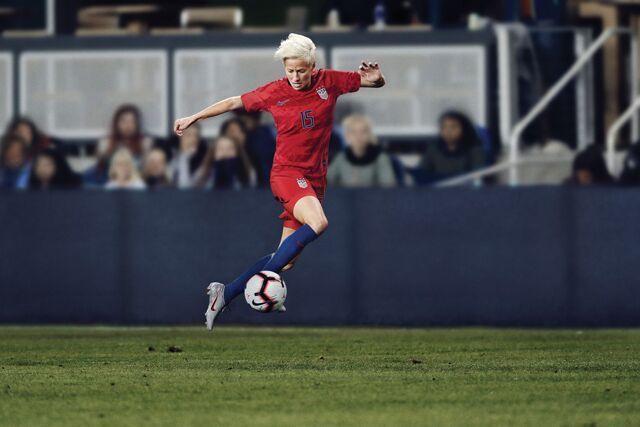 Megan Rapinoe tearing it up on the field

For people who don’t watch sports, but who want to support you, how do you suggest they get into it?

Megan: Tell them to get on Instagram and see what [players’] personalities are like, and support them for the things that they’re interested in, or the causes they’re into. You certainly don’t have be a soccer fan to find some sort of entertainment or joy in what we’re doing.

In soccer, young girls have to play together as a team. But then there’s what happens among young girls outside of soccer—like cliques, and mean girls. How did you navigate that?

Brandi: I’m navigating that right now because I coach 12-year-old girls. My responsibility as coach is to be a mentor, a sounding board, a soft place to land, a buffer, right? My message to them is that you have tremendous power, use it for good. Don’t hurt anyone’s feelings, because you know you wouldn’t want that yourself. And that’s difficult, because everyone’s fighting for space now. Social media is so awful at times—everything looks so good on the outside, but on the inside, it doesn’t feel that way. I want them to treat each other like they would want to be treated, and at the same time, learn how to stand up and say “I don’t like that” and then listen to each other.

Megan: Thankfully, I had a twin sister who was the social boss, so I was like, “Dear God, I’m gonna hide in the shadow and everything should be fine.” But now that we’re older we do kids’ (soccer) clinics together, and our message is “Be your best you,” which I’ve found tremendously helpful. You can never be anyone else, and therefore can never be better than they are at being themselves. So just be who you are.

Brandi: [When you’re on a team], you have to learn how to be as competitive as you can be, which in my world does not have a negative connotation, and you have to be supportive at the same time. And when I do that, I help [my teammate] be better, and likewise, she helps me.

Megan: People focus on, “Oh, girls can be very catty.” But I think on the flipside, when we’re force multipliers for ourselves and for other women, we sort of share the shine and put it on each other. Women have an incredible ability to lift each other up.