Details
BY Francesca Volpe
IN Entertainment
Published: 28 May 2019 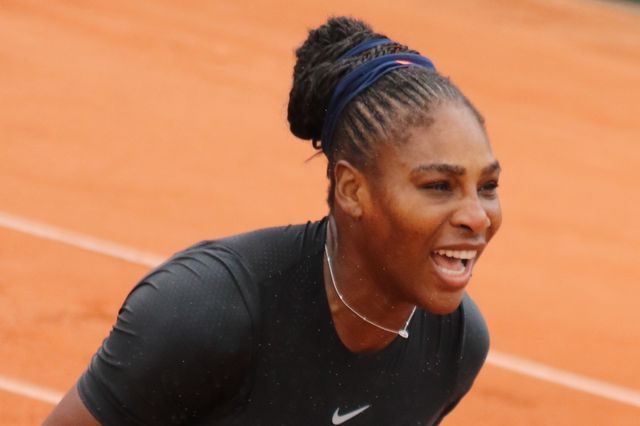 Before her opening match at Roland Garros, Serena Williams sported (pun intended) her latest Nike outfit. Designed by Virgil Abloh for the brand, the ensemble consisted of a black-and-white striped crop top, tennis skirt, maxi skirt (for photos) and cape with the French words for “champion,” “queen,” “goddess” and “mother” printed on it. A brand sponsorship and a superstar athlete are not an unusual occurrence. However, the words displayed on Williams’ cape not only serve as a reminder of her talent as an athlete and role model, but also as evidence of her astute awareness of the cultural and political power that fashion yields.

This year, she showed up in an outfit with the French words for:

Let the Roland Garros begin. Here is my French Open look designed by @virgilabloh and @nike.

As stated by Vanessa Friedman in an article for The New York Times, Williams “learned long ago, along with her sister, that people were going to pay attention to what players wore.” In a statement for Nike, she mentions, “I love when fashion becomes a vehicle for sharing a powerful message.” Last year, Williams attended the French Open wearing a black catsuit that not only made her “feel like a superhero,” but also was intended to help prevent blood clots after the challenging birth of her daughter, Alexis Olympia.

I'm always living in a fantasy world. I always wanted to be a superhero, and it's kind of my way of being a superhero.

I feel like a superhero when I wear it."

The catsuit, originally meant to literally save her life, turned into a point of controversy when the president of the French Tennis Federation, Bernard Giudicelli, suggested the outfit was disrespectful to the game. And suddenly, the debate over appropriate tennis court attire (and who gets to deem it appropriate) concentrated on a woman’s body. Twitter erupted with fans and colleagues voicing their support for Williams. Fellow tennis legend, Billy Jean King, tweeted:

The policing of women’s bodies must end. The “respect” that’s needed is for the exceptional talent ⁦@serenawilliams⁩ brings to the game. Criticizing what she wears to work is where the true disrespect lies. https://t.co/ioyP9VTCxM

Focused on securing another championship, Williams ignored the noise. Then, later that summer, she showed up to the U.S. Open in a tutu which, as stated by Friedman in her Times article, “was taken as something of a riposte to the French — you want girlie, I can do girlie — but which sent a message about reclaiming and reinventing old tropes of what was considered traditionally ‘ladylike’ and defining them as powerfully as she pleased.”

Thank you to the incredible @virgilabloh

This year, “the queen of the clay,” won her first round French Open match, beating Vitalia Diatchenko two sets to one. In the second round later this week, she will face either Dalila Jakupovic or Kurumi Nara. Hopefully, in addition to more wins, we will see more ensembles that not only serve as “positive reinforcement” for the “Khaleesi of the Great Grand Slam,” but also as reminders that women are champions.

Serena Williams Opens Up About Working Mom Guilt, Gets Support From Chrissy Teigen And Twitter

Tags: Serena Williams , French Open , tennis , outfit , athlete
Support Feminist Media!
During these troubling political times, independent feminist media is more vital than ever. If our bold, uncensored reporting on women’s issues is important to you, please consider making a donation of $5, $25, $50, or whatever you can afford, to protect and sustain BUST.com.
Thanks so much—we can’t spell BUST without U.