Details
BY Kat McQuade
IN Entertainment
Published: 20 May 2019 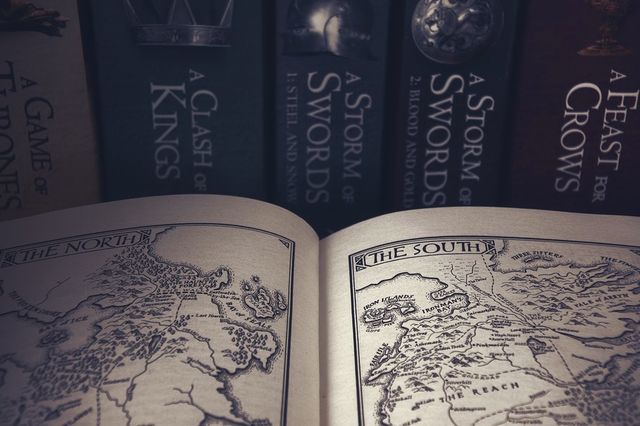 Here at BUST we have many, many opinions on the Game of Thrones series finale. However, we’re not going to get into them today (but we will eventually). Now that the show is officially over, here are some TV shows and novels that can fill the hole in your heart that GoT left.

1. Song of the Lioness Series by: Tamora Pierce (Novels)

Originally published in 1983, the novel Alanna: The First Adventure follows a young girl named Alanna who does not want to learn the art of magic. Instead, she wants to become a knight. However, women are not allowed to become knights in this world. Her twin brother does not want to travel down the path of knighthood. As they are about to be sent off to school, Alanna and her brother switch places. Disguised as a boy, Alanna faces the trials and tribulations of the path towards knighthood all the while dealing with all the other issues of being a girl. Alanna also has powerful magic and struggles with her destiny. Tamora Pierce’s classic high fantasy series is unapologetically feminist and one everyone should give a shot.

Published in 1968, the late Ursula K. Le Guin’s A Wizard of Earthsea is the first of the six popular Earthsea series. Featuring a protagonist of color, Le Guin included marginalized people in all of her work and championed many important causes.

“Ged was the greatest sorcerer in Earthsea, but in his youth, he was the reckless Sparrowhawk. In his hunger for power and knowledge, he tampered with long-held secrets and loosed a terrible shadow upon the world. This is the tumultuous tale of his testing, how he mastered the mighty words of power, tamed an ancient dragon, and crossed death's threshold to restore the balance.”

Eisner Award-winning writer and current show-runner of She-Ra and the Princesses of Power got her start with her mega-hit webcomic Nimona. Published as a graphic novel in 2015, the story follows Nimona, a brash, boyish shapeshifter who apprentices the kingdom’s greatest villain: Lord Ballister Blackheart. Together, the two endeavor to prove that the kingdom’s hero, Sir Ambrosius Goldenloin, isn’t the hero everyone thinks he is.

Funny, heartfelt, and subversive, the story is an instant classic in the realm of graphic novels. Nimona also features several LGBT characters, not afraid to put marginalized people at the forefront. The graphic novel has also been optioned for an animated film, slated to come out in 2021.

4. The Mists of Avalon by: Marion Zimmer Bradley (Novel)

“In Marion Zimmer Bradley's masterpiece, we see the tumult and adventures of Camelot's court through the eyes of the women who bolstered the king's rise and schemed for his fall. From their childhoods through the ultimate fulfilment of their destinies, we follow these women and the diverse cast of characters that surrounds them as the great Arthurian epic unfolds stunningly before us. As Morgaine and Gwenhwyfar struggle for control over the fate of Arthur's kingdom, as the Knights of the Round Table take on their infamous quest, as Merlin and Viviane wield their magics for the future of Old Britain, the Isle of Avalon slips further into the impenetrable mists of memory, until the fissure between old and new worlds' and old and new religions' claims its most famous victim.”

"Hild is born into a world in transition. In seventh-century Britain, small kingdoms are merging, usually violently. A new religion is coming ashore; the old gods’ priests are worrying. Edwin of Northumbria plots to become overking of the Angles, ruthlessly using every tool at his disposal: blood, bribery, belief.

Hild is the king’s youngest niece. She has the powerful curiosity of a bright child, a will of adamant, and a way of seeing the world—of studying nature, of matching cause with effect, of observing human nature and predicting what will happen next—that can seem uncanny, even supernatural, to those around her. She establishes herself as the king’s seer. And she is indispensable—until she should ever lead the king astray. The stakes are life and death: for Hild, her family, her loved ones, and the increasing numbers who seek the protection of the strange girl who can read the world and see the future.

Hild is a young woman at the heart of the violence, subtlety, and mysticism of the early medieval age—all of it brilliantly and accurately evoked by Nicola Griffith’s luminous prose. Recalling such feats of historical fiction as Hilary Mantel’s Wolf Hall and Sigrid Undset’s Kristin Lavransdatter, Hild brings a beautiful, brutal world—and one of its most fascinating, pivotal figures, the girl who would become St. Hilda of Whitby—to vivid, absorbing life.”

The BBC show Merlin is a reimagining of the story of the once and future king, King Arthur. The twist is that the story is told through a young Merlin’s eyes as a servant in the halls of Camelot, where magic is illegal and punishable by death (pause for dramatic effect). All the characters are reimagined as being in their early twenties, allowing for plenty of soapy drama. The series isn’t as serious as some other Arthurian tales, often falling into outright campiness, which is part of the charm of the show. In addition, the show has a strong cult following. The fun fantasy series ran for five seasons, all of which are available on Netflix.

7. Parable of the Sower by: Octavia Butler (Novel)

Set in a dystopian society, Octavia Butler’s critically acclaimed novel follows a young woman named Lauren navigating a world ravaged by water shortages, war, drugs, and disease. Her father is a preacher trying to lead people down the path of righteousness, and Lauren herself struggles with the condition of hyperempathy, which makes her extremely sensitive to the pain of other people. After her family is killed, Lauren and others must flee their compound on the outskirts of Los Angeles and navigate a treacherous America to find safety.

The popular book and TV series follow the story of Claire Randall and Jaime Fraser. Claire is a woman from post-WII England who accidentally travels back in time on her honeymoon to Jacobite Rebellion - Era Scotland where she meets Jaime, a young Scotsman. Diana Gabaldon’s series has a large fanbase and is, admittedly, a little on the smutty side, but nonetheless is a captivating story of time travel, history, magic, and love. Both the show and the books have received great praise. The show is available on Starz and the first two seasons are coming to Netflix on May 27th. If you enjoy spanning historical-fantasy dramas, Outlander might be up your alley.

9. Sorcerer to the Crown by: Zen Cho (Novel)

“In Regency London, Zacharias Wythe is England's first African Sorcerer Royal. And that's only the first of his problems. He must juggle the conflicting demands of a wayward Royal Society of Unnatural Philosophers, where a faction schemes to remove him from his position by fair means or foul. He must cope with the Fairy Court refusing to grant Britain the magical resources it needs. And now the British.  Government is avid to deploy this increasingly scare magic in its war with France. He must also contend with rumors that he murdered his predecessor and guardian, Sir Stephen Wythe. But this task would be easier if Sir Stephen's ghost would just stop following him around. And now he has to deal with something even more outrageous than any of these things: a female magical prodigy.

Ambitious orphan Prunella Gentleman is desperate to escape the school where she has drudged all her life, and a visit by the Sorcerer Royal seems the perfect opportunity. For Prunella has just stumbled upon English magic's greatest discovery in centuries - and she intends to make the most of it.”

“While most of the world has drowned beneath the sudden rising waters of a climate apocalypse, Dinétah (formerly the Navajo reservation) has been reborn. The gods and heroes of legend walk the land, but so do monsters. Maggie Hoskie is a Dinétah monster hunter, a supernaturally gifted killer. When a small town needs help finding a missing girl, Maggie is their last—and best—hope. But what Maggie uncovers about the monster is much larger and more terrifying than anything she could imagine.

Maggie reluctantly enlists the aid of Kai Arviso, an unconventional medicine man, and together they travel to the rez to unravel clues from ancient legends, trade favors with tricksters, and battle dark witchcraft in a patchwork world of deteriorating technology. As Maggie discovers the truth behind the disappearances, she will have to confront her past—if she wants to survive.”

Set to premiere on Lifetime this June, the comedy American Princess follows “Amanda (Flood), an Upper East Side socialite, [who, after running] away from her own dream wedding, she realizes that the life she thought she wanted wasn’t actually right after all. After impulsively joining a Renaissance Faire, Amanda experiences an unexpected awakening that leads her to reevaluate everything she thought she knew about the pursuit of happiness. She quickly develops new friendships, rivalries and romances that, much to the confusion of her family, opens her eyes to new beginnings.”

“Women have always been seen as monsters. Men from Aristotle to Freud have insisted that women are freakish creatures, capable of immense destruction.

Maybe they are. And maybe that’s a good thing....

Sady Doyle, hailed as “smart, funny and fearless” by the Boston Globe, takes readers on a tour of the female dark side, from the biblical Lilith to Dracula’s Lucy Westenra, from the T-Rex in Jurassic Park to the teen witches of The Craft. She illuminates the women who have shaped our nightmares: Serial killer Ed Gein’s “domineering” mother Augusta; exorcism casualty Anneliese Michel, starving herself to death to quell her demons; author Mary Shelley, dreaming her dead child back to life.

These monsters embody patriarchal fear of women, and illustrate the violence with which men enforce traditionally feminine roles. They also speak to the primal threat of a woman who takes back her power. In a dark and dangerous world, Dead Blondes and Bad Mothers asks women to look to monsters for the ferocity we all need to survive. “