Details
BY F Yeah History
IN Entertainment
Published: 17 May 2019 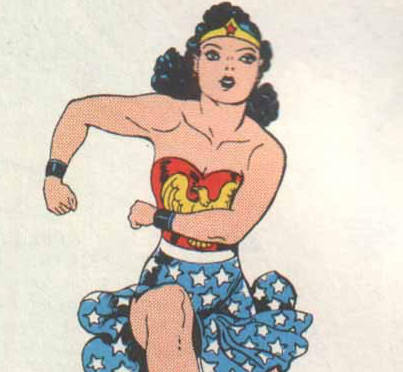 Like any superhero, Wonder Woman has a pretty complicated origin story. Born out of both feminism and misogyny, Diana Prince was the creation of psychologist Dr. William Moulton Marston. The good doctor had been bought in by the famed comics powerhouse DC to create a female superhero that would silence critics who called DC sexist and overly masculine.

Wonder Woman first appeared in 1941 and her unique brand of red, white, and blue heroism seemed like just the superhero feminism DC needed. 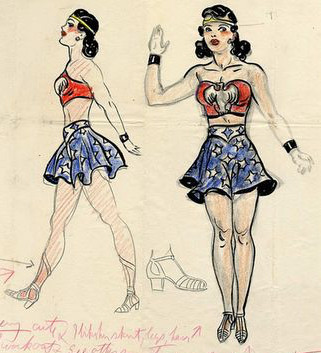 Dr. Moulton Marston was a self-confessed staunch feminist…just, you know, the kind of ‘feminist’ that might happily crack, ‘get back in the kitchen and make me a sandwich’ jokes. (We’ll get to that!)

For his era, Marsten was a new type of man. He talked about gender equality and believed in things like female contraception. He also had some pretty radical feminist theories: that is, he believed that women were the superior sex, held back by a societal duty to be housewives.

He also led a progressive life for the time, living with both his wife, Elizabeth Holloway Marsten, and lover, Olive Byrne. To avoid scandal, the trio told outsiders that Olive was their widowed sister…who just happened to give birth to Marsten’s kids.

Olive and Elizabeth were children of the suffrage movement, with Olive’s mother having both opened the USA’s first contraception clinic and been the first woman in the US to go on hunger strike as part of the fight for suffrage. Elizabeth, meanwhile, was 1 of just 3 women to graduate in her law class. 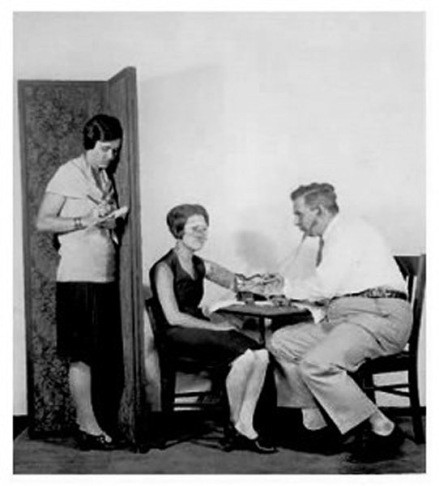 Olive, Elizabeth, and Dr. Marston test out a lie detector.

ALL OF THIS TRICKLED INTO WONDER WOMAN. 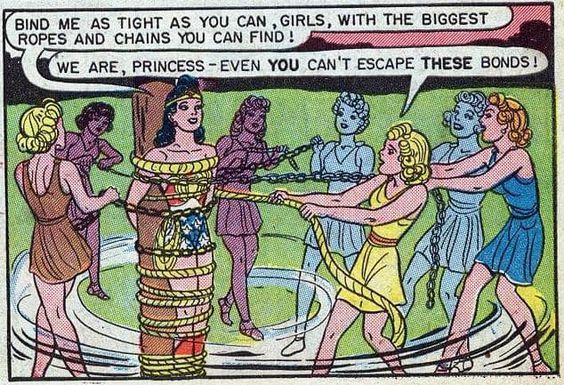 Believe me when I say, Wonder Woman spent a lot of her time tied up, manacled, chained and gagged. Though she used her lasso of truth to pin down bad guys, her main source of weakness was being captured and tied up…because…reasons.

Marsten was always hands on with his work, BUT he was particularly specific around art work that showed Wonder Woman bound (no idea why…).

His heroine was seen trussed up and tied in almost every issue, with Marsten enthusiastically telling his editors:

But not all women did. Dorothy Roubicek, the first female editor at DC, took issue with Wonder Woman’s treatment. Marsten shrugged off her concerns, explaining that:

‘OF COURSE I WOULDN’T EXPECT MISS ROUBICEK TO UNDERSTAND THIS…HAS BEEN IN COMICS ONLY 6 MONTHS OR SO, HASN’T SHE?’

See what I meant about the sandwich jokes?

But despite all of this, Wonder Woman’s origin story remained revolutionary for the time.

Okay: yes, part of the reason she leaves her home and comes to America is because she falls in love with a man. BUT she also goes because she’s heard that America is one of earth’s last hopes for female equality and that there’s a whole bunch of men trying to fuck that shit up; so, naturally, she needs to stop this through the medium of ass-kicking.

A whole lot of ass-kicking!

‘THE NEW TYPE OF WOMAN WHO SHOULD, I BELIEVE, RULE THE WORLD.’

Now, let’s all be in agreement, this is incredibly badass for the 1940s! Is it any wonder then that this new type of hero started to inspire girls to become real world heroes?

But all of this amazing ass-kicking quickly stopped when, in 1947, Marsten died. His death was pretty much immediately followed by:

1) A PSYCHOLOGICAL STUDY WHICH CLAIMED VIOLENCE IN COMICS HAD A DETRIMENTAL EFFECT ON YOUTH. THIS LED TO COMICS PUTTING MORE EMPHASIS ON SOAPY ROMANTIC STORYLINES, AND

2) THE DAWN OF THE SILVER AGE OF COMICS-WHICH THE INTERNET HAS LOVINGLY DUBBED ‘SUPER DICKERY’ FOR SHIT LIKE THIS: 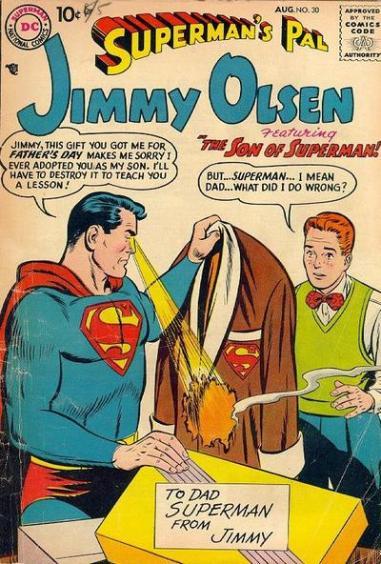 All this left Wonder Woman without a leader and easy prey to the super-dickery that was now gripping comic books.

And so Wonder Woman spending a lot of the 1950s writing a love advice column and dreaming of marriage, babies, and a career as a model. 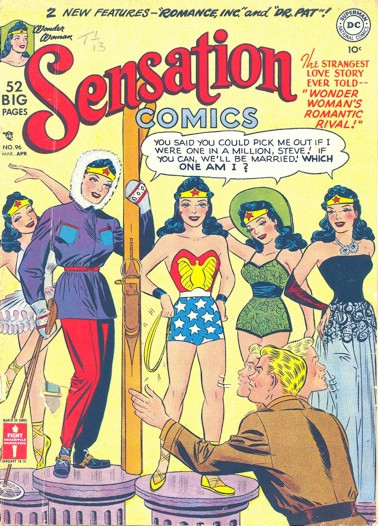 But that wasn’t to say Wonder Woman’s initial radicalism had been forgotten! The little girls she had inspired in the ’40s were now all grown up and spearheading a new wave of feminism.

Wonder Woman was the cover star of feminist magazine Ms. in 1972. Gloria Steinem explained how vital Diana Prince was to this movement:

‘WONDER WOMAN SYMBOLIZES MANY OF THE VALUES OF THE WOMEN’S CULTURE THAT FEMINISTS ARE NOW TRYING TO INTRODUCE INTO THE MAINSTREAM: STRENGTH AND SELF-RELIANCE FOR WOMEN; SISTERHOOD AND MUTUAL SUPPORT AMONG WOMEN; PEACEFULNESS AND ESTEEM FOR HUMAN LIFE’

In 1975 Diana Prince set out to inspire a new generation of children, when she made her TV debut with hit live action series Wonder Woman.

But Wonder Woman was more than a TV show. It soon turned into a national debate as to what exactly was proper attire for saving the world – a debate which has continued to this day… just now on a global scale!

The most recent actress to play Wonder Woman, Gal Gadot, has faced plenty of criticism on her costume and physique – during a recent TV interview Gadot was told she was too skinny and flat-chested to play Wonder Woman (no, I don’t get this logic either.)

Fortunately, Gal Gadot can read a bitch out, and told the reporter that Amazon women of old actually only had one breast so they could have more space for their bow and arrow.

Sadly, this was far from the first time Diana Prince had to clap back. In 1942, Wonder Woman was actually banned for a short time, all because of her dress attire! Wonder Women’s knee high skirt, bodice and knee high boots were seen as incredibly skimpy and likely to induce wide spread ‘lesbianism’ among impressionable young girls. And Lynda Carter’s 1970s Wonder Woman was as known for her tiny waist and low cut costume as she was her feminism and world saving.

In fact, just this year, Lynda Carter had to slam sexism yet again, after Wonder Woman lost an honorary UN ambassador role, following complaints the character was too sexualized.

For those wondering, the UN Ambassador role Wonder Woman lost was to fight gender inequality…

But if we can learn anything from Wonder Woman, it’s how to keep on busting walls down despite the adversity. Now with the mammoth success of her character on the big screen, it looks like Wonder Woman is set to become a hero to a whole new generation of girls.

Born from both suffrage and misogyny, she opened the door for female superheroes in comics, sparked the imaginations of fledgling female leaders, and is now kicking the door down on the future of female-led blockbusters. She may be in her 70s, but Wonder Woman’s got a lot of fight left in her.

In This Comic, Batwoman Is A Baseball-Playing Lesbian Superhero Fighting Fascism In The 1930s