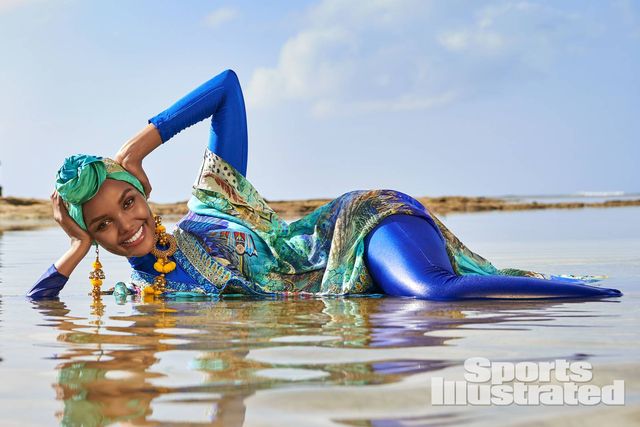 Halima Aden is the first model wearing a hijab and burkini to appear in Sports Illustrated. Aden was born and raised in a refugee camp in Kenya until the age of 7 when she moved to the United States. Her “rookie” SI Swimsuit spread was shot at Watamu Beach in Kenya by photographer Yu Tsai. The issue will be coming out on May 8th.

In 2016, 19-year-old Halima gained popularity when she was a semi-finalist and the first woman to wear a hijab in the Miss Minnesota USA pageant. From there, she signed on with IMG models and became a successful international model. She has been on covers such as British Vogue and walked runways including New York Fashion Week.

A Sports Illustrated editor said: “We believe beauty knows no boundaries. I admire Halima, and I consider her an inspirational human for what she has decided to use her platform for and her work with Unicef as an ambassador. She is, in my opinion, one of the great beauties of our time, not only outside but inside. When we met, I was instantaneously taken by her intelligence, enthusiasm and authenticity.”

The Sports Illustrated teaser mentions multiple times how she is a “modest Muslim” and that Halima “has been lighting up runways and magazine covers alike, reinforcing the fact that modesty can be glamorous, too.” It is definitely important to note that she is the first Muslim model to wear a hijab and burkini for the annual Sports Illustrated Swimsuit issue and has paved the way for other diverse models. But it is also important to note that she is still conventionally thin and attractive. Sports Illustrated has a long history of sexism and objectification of which this does not absolve the magazine.

According to Smithsonian, without counting the swimsuit issue, women only appear in 4.9 percent of Sports Illustrated covers, and are only the primary cover star on 2.5 percent of issues. When women do appear, they are, of course, hypersexualized. Halima Aden’s presence in the swimsuit issue is groundbreaking in it's own right, but it also feels like a tokenized stunt casting.

Before Millennial Pink, There Was Victorian Yellow