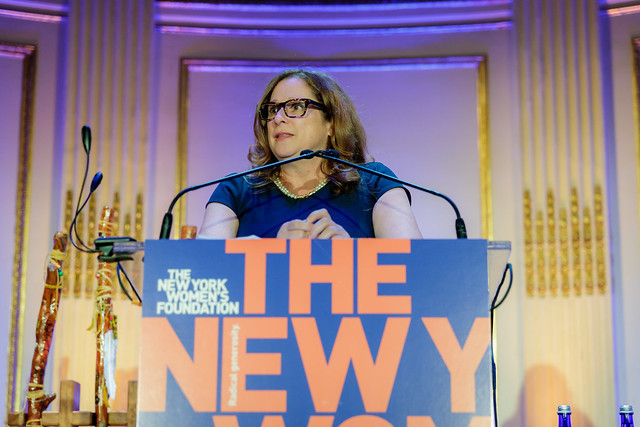 Disney Heiress Abigail Disney, the granddaughter of co-founder Roy Disney and grand-niece of Walt Disney, has been a long time critic of the mega-salaries of CEOs and the government giving the top 1% tax breaks. Recently on Twitter, Ms. Disney criticized current Disney CEO Bob Iger and other Disney executives for receiving bonuses and stock awards worth around $62 million last year. The amount lower tier executives and constituents received is unknown, but is estimated to be potentially millions of dollars more.

Last year Iger’s salary was nearly $66 million (1,424 times the median salary of a Disney employee), which Ms. Disney called “insane.” Disney proposes that the company’s executives set aside half of their bonuses for the bottom 10% of their 200,000 employees.

Currently, employees of the Disney parks in Anaheim, California make $15 an hour with a median salary of $46,127. Workers in the Florida parks make even less, though Disney has stated that Florida workers will make $15 an hour by 2021.

Ms. Disney has stated that she does not want government tax breaks and has insisted that the government tax the top 1% even more. In an op-ed for The Washington Post, Ms. Disney doubled down on her criticism of the company’s treatment of employees:

“[…] At the pay levels we are talking about, an executive giving up half his bonus has zero effect on his quality of life. For the people at the bottom, it could mean a ticket out of poverty or debt. It could offer access to decent health care or an education for a child.
Here is my suggestion to the Walt Disney Co. leadership. Lead. If any of this rings any moral bells for you, know that you are uniquely situated to model a different way of doing business. Reward all of your workers fairly. Don’t turn away when they tell you they are unable to make ends meet. You do not exist merely for the benefit of shareholders and managers. Reward all the people who make you successful, help rebuild the American middle class and respect the dignity of the men and women who work just as hard as you do to make Disney the amazing company it is.”

In light of the criticism, Disney defended its salary practices in a statement to the New York Times:

“Disney has made historic investments to expand the earning potential and upward mobility of our workers, implementing a starting hourly wage of $15 at Disneyland that’s double the federal minimum wage[.]”

In the fall of 2016, a homeless Disney janitor died alone in her car at the age of 61. As reported by VICE, in a 2018 survey, 73% of Disney employees said they don’t make enough to cover basic expenses such as housing, food, and medical care. The $15 CA minimum wage was only implemented this year after union negotiations that lasted several years (and the company has a long history with anti-union tactics. So much for the pro-labor Newsies). Over the past decade, wages have not risen with current inflation trends. Many park workers face homelessness in addition.

As of 2018, the company has a net worth of $98 billion. Their worth is expected to only grow in light of the recent Disney-Fox merger.

While Ms. Disney’s criticisms are important, and she has set up multiple nonprofits which give back to marginalized communities, it should be noted she has a net worth of $500 million. For all of her talk, why doesn’t she redistribute some of her wealth to the park workers who are so underpaid? How does a woman who so openly criticizes the wealthy not give her own excess of riches to those her family has taken advantage of and disenfranchised?

Disney has plenty of money and even more coming their way. This fall, when you start your annual payments of the streaming service Disney+ (don’t act like you aren’t going to get it), just be sure to remember the park workers who make $15 an hour from a company worth billions of dollars.