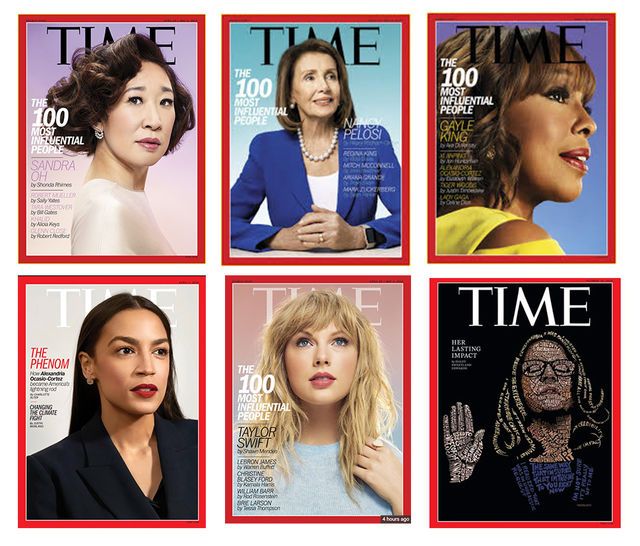 Reading the TIME 100 Most Influential People List was a roller coaster of emotions. Many people took to Twitter this morning to point out the insensitivity of having Christine Blasey Ford on the same list as her perpetrator, Brett Kavanaugh. The list has some very exciting highs like Tessa Thompson writing about Brie Larson, and Emma González writing about Greta Thunberg, and some low lows like Chris Christie writing about Donald Trump, and Rod Rosenstein writing about William Barr. Although the list is technically “the most influential people” regardless of if they positively or negatively influenced the world, all of the bios are written by a colleague/friend of the person which makes them all incredibly biased, and some of them very concerning. Without further ado, here are the highlights and lowlights of this year’s list:

Sandra Oh: Tribute by Shonda Rhimes. Rhimes starts off by saying, “One of the greatest gifts of my creative life has been the opportunity to write words to be spoken by Sandra Oh.” From her 10 years as Dr. Yang on Grey’s Anatomy, to her award-winning role on Killing Eve, Sandra Oh “has chosen to fearlessly take up space in a universe that has not always made space for her.” Not to mention, she was on the cover of BUST in 2005.

Indya Moore: Tribute by Janet Mock. Mock writes, “we came together again for Pose, a trailblazing series that changed the landscape of television and our lives. Writing her character Angel proved healing for me as a trans woman who had walked in those same platform shoes, longing for more than the crumbs society had thrown girls like us.” Indya was raised in the foster care system in the Bronx and now uses her platform as an actress and model to center marginalized communities.

Arundhati Katju and Menaka Guruswamy: Tribute by Priyankya Chopra. Katju and Guruswamy were the public-interested litigators behind India’s landmark case to overturn the 157-year-old anti LGBTQ+ law. As Chopra said, “In their committed fight for justice, they have shown us that we as a society must continue to make progress, even after laws are changed, and that we must make an effort to understand, accept and love.”

Brie Larson: Tribute by Tessa Thompson. Most recently, Brie Larson starred as Captain Marvel in Marvel’s first female-led superhero movie, which has made more than $1 Billion in the global box office. She is also an advocate for gender equality, inclusivity, and ending sexual harassment in the workplace. Thompson wrote “For Brie, it just comes naturally. Her activism is an extension of who she is. She sits at a table and wants to make sure everyone has access to it.”

Dream Hampton: Tribute by Tarana Burke. Burke stated, “Now, after the release of her reckoning documentary Surviving R. Kelly, it’s even more clear that dream’s work has always been about capturing our black magic, in all of its complexity, so that we might see ourselves clearly.” She also details her tender approach to talking to the survivors in the film, and making sure their voices were heard and unfiltered. Burke concluded by saying, “At her core, Dream Hampton is a community organizer from Detroit alerting us all to a crisis and that we have a role in solving it. Because she believes that we can.”

Greta Thunberg: Tribute by Emma González. This tribute is a very special exchange between young female activists. González wrote, “Greta Thunberg saw her power in us, and we in turn see our power in her.” Greta is known for her perseverance and articulation when it comes to fighting for climate change in Sweden. Greta has said, “We can’t save the world by playing by the rules, because the rules have to be changed.”

Alexandria Ocasio-Cortez: Tribute by Elizabeth Warren. AOC had a quick rise from working as a bartender to being one of the most talked about politicians in Washington. Warren wrote, “She reminds all of us that even while greed and corruption slow our progress, even while armies of lobbyists swarm Washington, in our democracy, true power still rests with the people. And she’s just getting started.”

Jane Goodall: Tribute by Leonardo DiCaprio. Goodall went to Tanzania at the age of 26 to study chimpanzees, and wound up conducting research that changed science forever. She has been committed to environmental protection her whole life and spreads awareness worldwide. DiCaprio wrote that “hers is a powerful message to protect the inherent rights of every living creature, to provide hope for future generations and to sound an urgent call against the greatest environmental threat of all—climate change. Anyone who has heard her speak, or heard her story, has been mesmerized by her life’s work and moved by her philanthropic
legacy.”

Leana Wen: Tribute by Cynthia Nixon. Nixon wrote, “Dr. Leana Wen is the first physician to lead Planned Parenthood in half a century, and she’s just what the doctor ordered.” Wen previously served as the health commissioner of Baltimore where she issued a blanket prescription for the opioid antidote Nalaxone for every resident of the city which saved an estimated 3,000 lives. Nixon concluded, “she’s making it clear that the organization is not backing down from the fight to protect the right to safe, legal abortion.”

Michelle Obama: Tribute by Beyoncé Knowles-Carter. Michelle Obama was not only the first Black woman to be the first lady, but she did the title justice, and wore it with pride. Beyoncé wrote, “The way she looked, walked and spoke, in that warm but authoritative tone, we saw our mothers and sisters. She was strong and ambitious and spoke her mind without sacrificing honesty or empathy.” She continued, “I’m honored to know such a brilliant black woman who’s spoken about the sacrifice it takes to balance her passions while remaining a supportive partner and mother, and now a best-selling author with Becoming.”

Radhya Almutawakel: Tribute by Bernie Sanders. He wrote, “just before the Senate’s historic vote to end U.S. support for the Yemen war, I was struck by the clarity she brought to a conflict that too few have noticed. Yemen faces the world’s worst humanitarian crisis not because of natural disaster, she told me, but because of man-made armed conflict: ‘Yemenis are not starving, they are being starved.’” Radhya and her comrades make daily risks as they seek to uncover the human costs of war.

Christine Blasey Ford: Tribute by Kamala Harris. Christine Blasey Ford has become infamous for having the courage to speak out, in the most public of ways, about the trauma she faced at the hands of Kavanaugh. Harris wrote, “She had a good life and a successful career—and risked everything to send a warning in a moment of grave consequence.” Her testimony spoke to women across the country who have suffered abuse and assault. She deserves to be on this list as much as anybody else, and it is in the poorest taste that Kavanaugh is on it alongside her.

Donald Trump: Tribute by Chris Christie. I could not even read through the tribute without gagging, but here is a quote to give you the idea, “President Trump deserves great credit for daring to try to personally persuade Chairman Kim to join the family of nations. This approach holds the possibility for history–making changes on the Korean Peninsula to make us all safer.” Thank you, next.

Mitch McConnell: Tribute by John Boehner. Another extremely cringe-worthy tribute which includes the haunting words: “Washington in recent years has been described as a place that lurches from crisis to crisis. One person has done more to defuse these crises time and again than any other individual in American government. His steady hand at the tiller of the U.S. Senate has been a source of stability for our economy and certainty in our tumultuous political process…he has shaped the direction of the Supreme Court for generations to come.” Not sure less true words have ever been spoken.

Brett Kavanaugh: Tribute by Mitch McConnell. This one is possibly the most cursed tribute of the whole list. "Conflict resolver" McConnell wrote, “When Brett Kavanaugh was named the President’s choice to succeed Justice Anthony Kennedy, he was one of the most qualified Supreme Court nominees in modern history. He had a sterling academic record, impeccable legal credentials and a prolific record of thoughtful and impartial jurisprudence over more than a decade on the D.C. Circuit Court of Appeals.” He has literally none of those things.

William Barr: Tribute by Rod Rosenstein. Rosenstein wrote, “The enthusiasm in and around the Department of Justice was palpable when President Trump announced his nomination of Attorney General William Pelham Barr. A brilliant and principled conservative lawyer, Barr brings unique experience to the challenge of working at the intersection of law and politics.” I do not want any part in something that causes enthusiasm in the Trumpian Department of Justice.

Matteo Salvini: Tribute by Steve Bannon. Bannon, a known white supremacist and anti-Semite, wrote a rave, albeit horrifying, endorsement of Salvini's politics. “No longer would Brussels dictate immigration policy; no longer would the “party of Davos” dictate Italy’s sovereignty; no longer would the European elites silence the Italian citizens. Matteo Salvini resurrected Italy’s national pride…From humble beginnings, Salvini is now the most talked-about politician in Europe—and by the end of May, after the European parliamentary elections, could well be the most powerful.”

Jair Bolsonaro: Tribute by Ian Bremmer. Bremmer writes that Bolsonaro is, “a poster boy for toxic masculinity, an ultraconservative homophobe intent on waging a culture war and perhaps reversing Brazil’s progress on tackling climate change.” Wow, all of my least favorite things.

Sandra Oh, Before "Killing Eve": From The BUST Archives

Tags: TIME , Christine Blasey Ford , Kavanaugh , Michelle Obama , Elizabeth Warren , Kamala Harris , Greta Thunberg , Emma Gonzalez , Beyonce , Donald Trump , Bolsonaro
Support Feminist Media!
During these troubling political times, independent feminist media is more vital than ever. If our bold, uncensored reporting on women’s issues is important to you, please consider making a donation of $5, $25, $50, or whatever you can afford, to protect and sustain BUST.com.
Thanks so much—we can’t spell BUST without U.