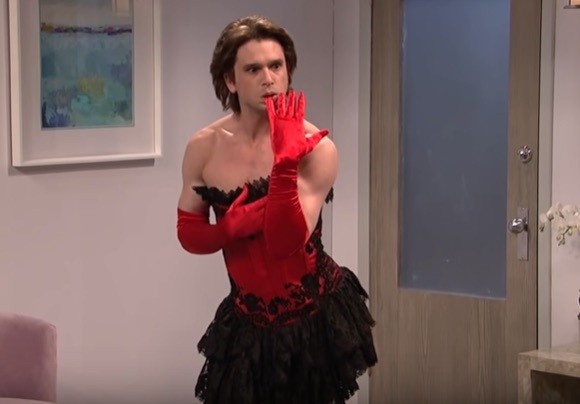 If you watched this past weekend’s episode of Saturday Night Live, then you were lucky enough to see Kit Harington in red nipple tassels. If you didn’t, you should definitely watch it now. The skit was a play on bachelorette parties and male strippers, but instead of the typical fireman or cop getup, Harington donned red satin and black lace in a burlesque striptease. Though I’m not a fan of comedy that relies on the tired trope of a man in a dress being what makes it funny, this made me curious to investigate the role of men in burlesque.

My first interaction with burlesque was in high school when I watched the film Burlesque with Cristina Aguilera, Cher, and Stanley Tucci. I felt scandalous watching it, which was partly why I was so fascinated with it. Everything about it was beautiful: the music, the intricately decorated costumes and sets, the powerful voices, the humor—it was stunning and glamorous and it was everything I wanted to emulate.

What I didn’t realize was that there’s an entire world of men in burlesque that often flies under the radar, Boylesque. Think drag meets "Magic Mike" meets full-frontal nudity (what more could you want?). Though boylesque is comedic at its core, its humor isn’t derived just from the sight of a man in a dress. In fact, it’s a lot more than that. It’s the same culmination of comedy, striptease, dance, and glitter that makes up burlesque, but with men performing. It’s a beautiful and exciting take on an old art form that pushes back on societal expectations of masculinity and conceptions of male beauty. Boylesque is a way for men of all sizes to express themselves in ways that they previously may not have had.

Though boylesque is still more niche than burlesque, it is rapidly becoming more well-known and widely appreciated. There are annual Boylesque festivals in New York City, Seattle, and New Orleans. Behind the festivals are Jen Gapay and Daniel Nardicio. Gapay started Thirsty Girl Productions and through this alias she produces music, burlesque, and variety shows. In 2013 and 2014, she was voted the #1 Most Influential Non-Performing Woman in Burlesque by 21st Century Burlesque. Nardicio started out as a nightlife promoter in 2000 in New York City, and has since been involved with cabaret and producing the Boylesque festivals. The duo have been producing these annual festivals for years now, and though they haven't released the 2019 NYC festival dates yet, I'm keeping on the lookout.

Though men had performed in burlesque shows prior to the Boylesque festivals, the formation of the festivals created space for men of all backgrounds with passions for burlesque to take center stage (quite literally).