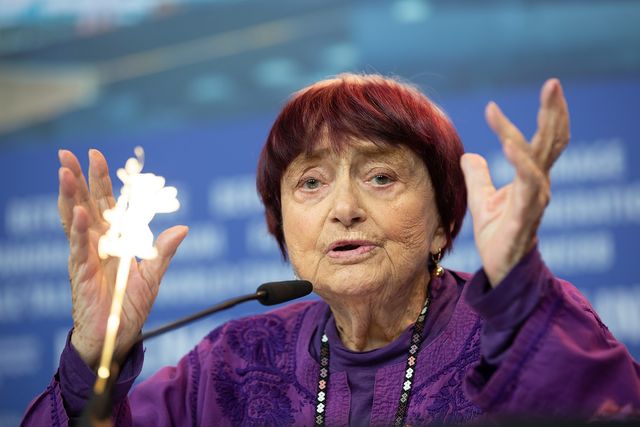 Agnès Varda, the trailblazing French filmmaker who was instrumental in the French New Wave movement, passed away March 29 at her home in Paris. She was 90 years old. A spokeswoman from her production company, Ciné-Tamaris, confirmed her death from a short battle with breast cancer, The New York Times reports.

Born Arlette Varda on May 30th, 1928 in Ixelles, Belgium to a Greek father and a French mother, Varda's family relocated to Sète, France in 1940. She changed her name to Agnès at 18. After studying art history at the École du Louvre and photography at the École des Beux-Arts, she worked as a photographer at the Théâtre National Populaire in Paris.

Varda’s early films cemented her reputation as a feminist and cutting-edge filmmaker. La Pointe Courte, her first film, was released in 1956. “Both a stylized depiction of the complicated relationship between a married couple and a documentary-like look at the daily struggles of the locals,” the film is considered to the unofficial first film of the French New Wave and informed the narrative and visual styles of directors such as Jean-Luc Godard, François Truffaut and Alain Resnais, who edited La Pointe Courte.

Varda preferred a documentary style for her films, often using regular people as actors, still images and narratives that build in complexity and intensity. Her second film Cléo From 5 to 7 from 1962 taps into viewers’ existential dread, as it depicts a slice in time where a woman awaits determining results from her doctor.

Cléo From 5 to 7 was part of the “Left Bank” movement, a politically driven by-product of the New Wave that was “less referential and more focused on the experimental limits of cinema,” The Atlantic reports. Varda referred to her style as “cinécriture” or “writing on film,” in which she combined literature, photography and cinema.

T. Jefferson Kline, a French professor at Boston University and editor of Agnès Varda: Interviews, told The New York Times, “She was very clear about her feeling that the New Wave was a man’s club and that as a woman it was hard for producers to back her. She obviously was not pleased that as a woman filmmaker she had so much trouble getting produced. She went to Los Angeles with her husband, and she said when she came back to France it was like she didn’t exist.”

She took a break from her career after the birth of her son, but told actress Mireille Amiel in a 1975 interview that “despite my joy, I couldn’t help resenting the brakes put on my work and my travels.” To cope with feelings of stagnancy, she has a 300 foot electric line for her camera and microphone running from her home which she used to interview people on Rue Daguerre. The end product was her 1976 film Daguerréotypes.

The appreciation for Varda’s work as only grown throughout decades. She received a Palme d’honneur from the 2015 Cannes Film Festival and in 2017 she was awarded an Oscar for lifetime achievement. She interwove important social themes with her art, particularly focusing on the role of women. “All life is borders. Language borders, ethnic borders, etc. and in cinema, I tried to erase borders, or make them smooth: between documentary and fiction; black and white and color; cinema and art,” she said in a 2015 Criterion Collection interview. At the 2018 BFI in London she told the audience, “I wanted to invent cinema, and be happy to be a woman. I wanted to be a radical.”

How Lucille Ball Smashed Her Way Through The Patriarchy

Corita Kent Was A Pop-Art Pioneer—And A Catholic Nun