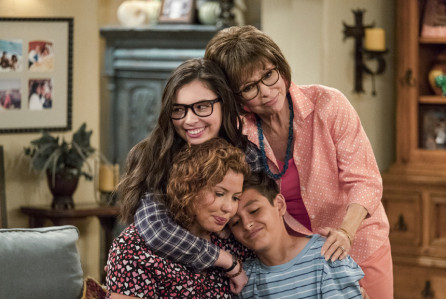 In a un-American fashion, Netflix canceled One Day at a Time, a family sitcom featuring Hollywood royalty, Rita Moreno, and a predominantly Latinx cast. After three solid seasons, the show’s ending came at the worst time, when Latinx communities are constantly being villainized by the United States president.

Former showrunner, Gloria Calderón Kellett tweeted a hopeful objective to find a new home for the series and for the relatable characters, many of whom are strong-willed women whose lives and struggles are rarely represented on screen.

Apart from its darling image of being what tv networks would coin a “modern immigration story,” One Day at a Time was a brave project that dug into dark themes. It offered Latinx viewers a chance to reflect on their own experiences with depression, sexual identity, sexism, male-privilege, gentrification, and addiction. It showed how a Latinx family could constructively talk about these issues, and exposure to such conversations is vital to a community whose culture too often represses uncomfortable emotions and avoids open discussions about sex and mental health.

Viewers are ready for full-dimensional characters with brown skin! It’s time to retire the maids, drug dealers, victims of abuse, and the oversexualized female tropes in red dresses (no shade directed to the glamorous emoji).

The show challenged the status quo on screen and behind the camera. Last year Calderón Kellett tweeted, “our (season two) directors were ALL either women, POC (people of color) or BOTH. Our writing staff is 50% female and 50% POC & 20% LGBTQIA+. Our guest cast was 61% female & 50% POC & disabled.”

The Atlantic separates me from my Latinx family in Texas. I watched One Day at a Time when I felt homesick. For so many of us, the women in this show embodied the courageous women who raised us. The heart of One Day at a Time lies in the idiosyncrasies: the fluid mix of Spanish and English, leftover food stored in empty butter containers, sacred recipes, the music, the dancing, the religious relatives with retrograde beliefs, the large family gatherings, the Spanish nicknames, and the warmth. When we see parts of ourselves represented on mainstream television we feel less alienated. The storytelling on One Day at a Time reflected my world.

For Netflix to silence these voices is an injustice, not only to my people, but to all viewers who deserve and desperately need to see more diversity on screen.

How Much Do You Know About Rita Moreno? Take The Quiz!