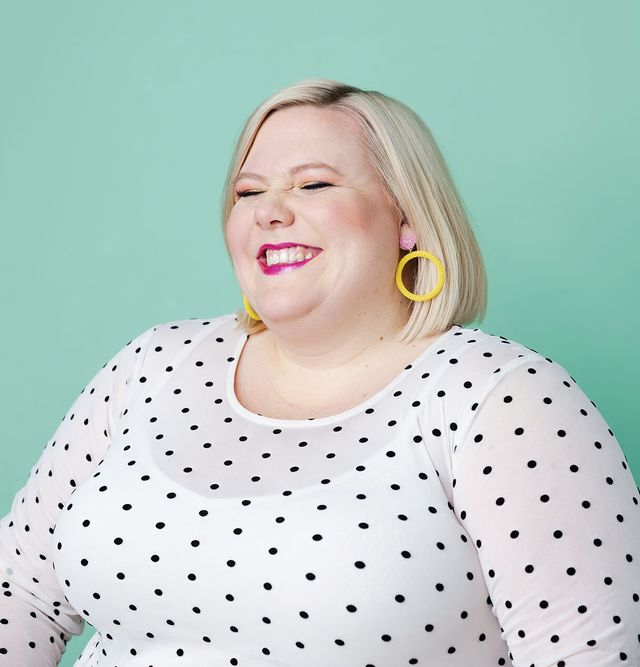 Fat acceptance writer and activist Lindy West has been wielding her pen like a sword for over a decade. Here, she dishes on her new Hulu show, writing large characters who actually get laid, and ranking the judges on Chopped.

Author and humorist Lindy West is a refreshing and complex contradiction. Best known as the author of the popular memoir Shrill: Notes from a Loud Woman, and for her New York Times opinion columns where she often tackles topics surrounding both feminism and fat positivity, she’s a frequent divulger of vulnerable and heartbreaking realities, while also fearlessly deflecting all attempts to silence her.

For example, after appearing on FX’s Totally Biased With W. Kamau Bell in 2013 to discuss rape culture in comedy, West made a video for Jezebel titled, “If Comedy Has No Lady Problem, Why Am I Getting So Many Rape Threats?” in which she read out loud—with a flat affect—the multitude of violent rape threats she received after the show aired. All were saturated with promises of physical violence, fat shaming, and other revolting disparagements. And all were written by men who, ironically, were outraged by her televised assertion that comedy isn’t a safe place for women.

West’s work continues to be controversial, but it has also earned the 37-year-old legions of fans. So many, in fact, that a new TV adaptation of Shrill starring SNL’s Aidy Bryant is coming to Hulu March 15, and she has two more books and an independent film she’s co-producing with her husband in the works as well.

When I caught up with West via video chat at her home in Seattle, WA, she was still in her pajamas, but even sleepy-eyed, her answers were pure gold.

The new Shrill series is based on your memoir, and you were one of the writers on the show as well. Tell me what you prioritized when it came time to turn your life story into a script.
We really wanted to emphasize the reality of a fat person’s life, which is a familiar story to a lot of people. It’s about a person who feels like she doesn’t deserve the life she wants. She’s hanging back and apologizing for her body and waiting until it’s “fixed” to fully live. Viewers are meeting her in the moment when she’s just about to break through that wall and start living the way that she wants to, and deserves. Obviously it’s a fat show. But it’s not just a fat show, because we’re all humans with complicated lives and that often becomes flattened in mainstream representation. We only see weight loss story arcs or failed weight loss arcs, and this creates the illusion that we only have two options: you can either be happy because you lost weight, or sad because you can’t lose weight. And that’s not the full spectrum of fat humanity. Aidy and I talk all the time about how it’s not really a thing for most fat people to move through the world constantly thinking, “Fat, fat, fat, fat. Here I am walking down the street while fat today! I’m a fat lady buying groceries! Fat, fat, fat, fat!” The reality is that I would never think about it if I didn’t live in a fatphobic society that reminded me all the time.

In the pilot episode I saw, I also witnessed a more neutral representation of abortion than I have ever seen on any other TV show.
My original dream was to have an entire episode around the clinic, but it came down to: Do we do that, or do we make sure the abortion clinic makes it into the pilot? We obviously chose the second, but it was a powerful experience all around. There have been other abortion scenes on TV, but it’s really rare to have it treated with so little drama. The main character goes in for a medical procedure and is taken care of by health care providers who are good at their job. While her romantic relationship may be complicated, she’s not conflicted about the procedure itself. There isn’t the questioning of beliefs, and that’s something I’m really proud of. While we were in the middle of writing the season, Justice Kennedy announced his retirement from the Supreme Court and it became clear that the show was going to come out in a world where Roe v. Wade was in peril, so it meant a lot to me to be able to put an abortion scene in the pilot of our comedy show.

How was it for you to watch your memoir—which was heavily edited—become a show—also heavily edited—and to then watch it on screen?
Honestly, it was fucked up, man. [laughs] It was a seriously fucked up and weird thing to go through. Again, it’s not really my life. We pulled from all the writers’ experiences. However, of course a lot was pulled from my real life. It’s been tailored to mirror a lot of the exact emotional situations I’ve been in. The parent part was the hardest though; I stupidly wrote several lines of dialogue for the dad that were real things that my real dad said when he was dying of cancer. That was rough, but also a beautiful gift. So yes, the whole experience is bizarre and scary and vulnerable and fucks with your mind but also—what a cool thing to be able to do, right?

“We only see weight loss story arcs or failed weight loss arcs, and this creates the illusion that we only have two options: you can either be happy because you lost weight, or sad because you can’t lose weight. And that’s not the full spectrum of fat humanity.”

Were there any non-negotiables for you that you insisted on while making the show?
The thing that I made clear from the very beginning—even while I was shopping the show around—was that at no point in this show would the main character step on a scale, then look down and sigh. There will be no scales. It was also important that she had sex. Maybe not a perfect sex life, but a relatively robust one. [giggles] It was also really important to me that the cast was diverse, because if that’s something you believe in, you have to make those decisions on purpose. When you’re making something in a racist, broken system, diversity doesn’t just conjure itself up out of nothing. You actually have to actively make it happen and build the kind of world that you want.

There are—comparatively—more fat bodies in shows and movies lately. I’m thinking about Dumplin’, Nailed It!, Dietland…and while I’m seeing a lot of celebration, they’re also being met with copious amounts of criticism. What are your thoughts on this?
Obviously, not everyone is going to do the job that you’d like them to do, and nothing is ever diverse enough; everything is always too white, too straight, and too small! Small-fats are everywhere, even in our show. There’s always room for expansion and representation. Those of us who have been talking about these things for a long time know that the real work is in representing the most marginalized bodies and identities, because that’s where real change comes from. When you’re working within a capitalist system, which we all are, that’s a challenge because you have to get these projects through a million focus groups and executives and PR teams. It’s easier right now to get a small-fat, white woman on screen—which is really difficult to come to terms with for me. Ultimately, I think it’s important to remember that in this moment, this is just the first step. I don’t think that the work being done is without value—it does change people. But at the end of the day, it’s the first step towards changing the world, not the last.

Amen. OK, last question. I know you’ve been doing a lot of interviews around Shrill. What is a question you wish people would ask you that they haven’t yet?
Well, to be honest, no one has ever asked me to rank the judges on Chopped. Which is kind of rude!

Lindy West, will you please rank the judges on Chopped?
Finally! It’s hard, though, because they’re like my family. I have to go with Alex Guarnaschelli as number one because I’m obsessed with her and she’s the indisputable boss. Then, probably, Amanda Freitag as number two because she’s kind, precise, and great at articulating nuance and giving constructive criticism. I also love Maneet Chauhan because she brings a needed sweetness to the show, so she’s gonna be third. I’m basically putting all the women first because we gotta put women first, y’know?

I’m shocked that people don’t ask you to rank Chopped chefs more often. You are clearly an expert judge of judges.
I know! I’m really, really good at this. And I could go on forever, but we’ve got a world to change. So let’s get back to that, shall we? 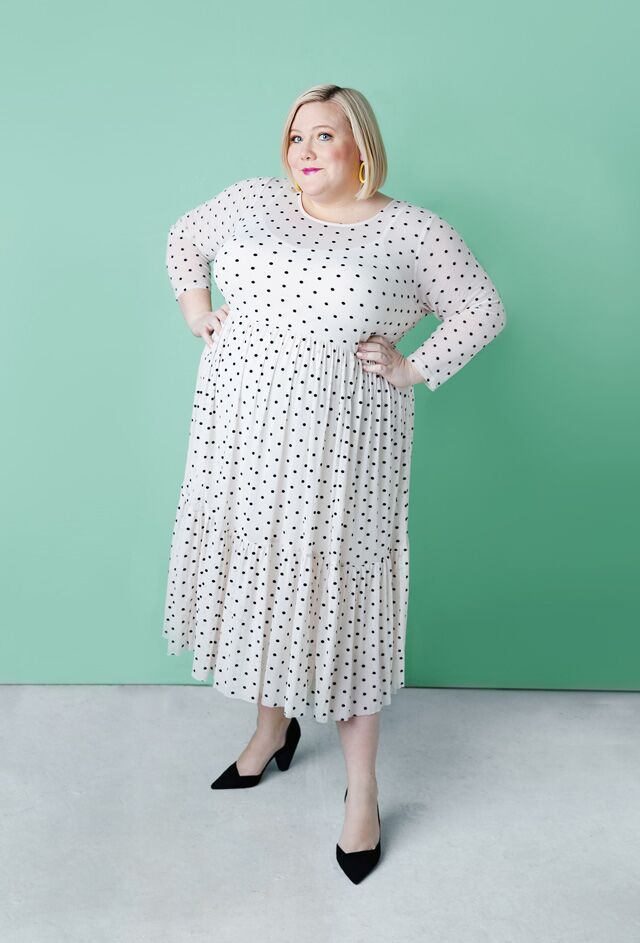 Tags: Shrill , Lindy West , Jes Baker , fat acceptance , fat representation , abortion , Lindy West , Shrill
Support Feminist Media!
During these troubling political times, independent feminist media is more vital than ever. If our bold, uncensored reporting on women’s issues is important to you, please consider making a donation of $5, $25, $50, or whatever you can afford, to protect and sustain BUST.com.
Thanks so much—we can’t spell BUST without U.