The Oscars Almost Got It All Right, Except... 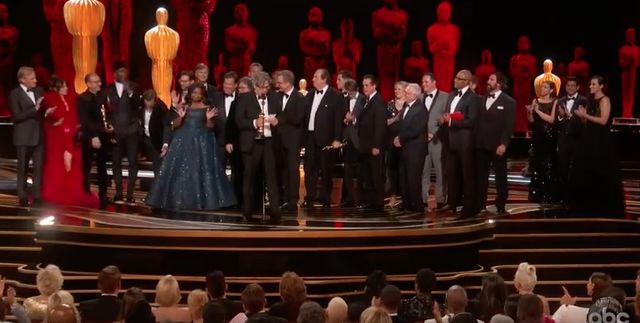 Sunday night, Feb. 24, marked another Academy Awards ceremony for the books. And at the seasoned age of 91, Oscar almost had it right. Last night's biggest honors for film was the most diverse yet. Why? Because of inclusion. It was a huge night for people of color, but especially, women of color.

The host-less show opened with a performance from Adam Lambert and Queen. Then followed a humorous performance from what would have made perfect sense for replacement hosts: Maya Rudolph, Amy Poehler, and Tina Fey. Coincidentally enough, Kevin Hart’s non-apology for his past homophobic comments might have been the best thing to happen to the Oscars. The Academy’s choice to nix a host altogether after not replacing Hart moved the show along rather quickly and effectively. There was none of the unnecessary filler; it allowed the presenters to present and leave the necessary time for any excited and long-winded winners.
There were a slew of firsts throughout the night. The very first award of the night, for Best Supporting Actress, went to Regina King, first time nominee for her role in "If Beale Street Could Talk." Then, the first African-American women to win for best costume and production design, Ruth E. Carter and Hannah Beachler both of “Black Panther.”

And overall female visibility was incredibly strong, with Kate Biscoe and Patricia DeHaney’s makeup and hairstyling win for “Vice” and Rayka Zehtabchi and Melissa Berton’s best documentary short win for “Period. End of Sentence.” “Period” which follows the stigma around menstruation in rural parts of India and how it affects the lives and education of women.

“I’m not crying because I have my period or anything,” a teary Berton said on stage. “I can’t believe a film about menstruation won an Oscar!”

Alfonso Cuaron racked up several wins for best director, cinematography and best foreign language film for “Roma,” a black-and-white film entirely in Spanish, available on Netflix. Cuaron maintained vocal about the spotlight the film has put on underrepresented people like his lead, the indigenous first-time actress Yalitza Aparicio. However, it was Jose Andres who introduced the film for Best Picture nominee who perfectly stated “Immigrants and women move humanity forward.”

Continuing the intentional diversity as far as nominations and wins, The Academy also seemed to be very mindful of the presenters. One of the more heartwarming interactions was Barbara Streisand and Spike Lee, sharing the importance and her personal appreciation for "BlackkKlansmen," based on the true story of Ron Stallworth, the first black detective in Colorado Springs Police Department, who infultrataed the Klu Klux Klan. From the stage, she noted that though she and Lee were different, they were both from Brooklyn. Spike Lee could be heard cheering from the crowd. These moments, though intentionally orchestrated by The Academy, captured the essence of artists marveling at other artist’s art.

After all the diversity for the night and following up from last year’s Best Picture blunder--it happened. The most controversial film, “Green Book” won as the Picture of the Year. The film is nothing short of a typical White Savior film. Had “Green Book” creators actually consulted with the living family of Dr. Don Shirley, world-class African-American pianist, for an accurate depiction of his real relationship with Frank Vallelonga , and the importance of "The Negro Motorist Green Book" for black travelers in the US during the 60s, the win would have been warranted. However, it did not. This is why it is so crucial to have space for marginalized people to tell their own stories; because white creatives left to their own devices, create “The Green Book”—and rewrite history and ultimately are rewarded.

Watch as the creators of "Green Book" thank everyone but Dr. Donald Shirley.

Who knows, maybe the 92nd Academy Awards might be better. Don't hold your breath though.

Hollywood Has A Long History Of Political Activism

Tags: Regina King , The Oscars , Lady Gaga , Bao , Black Panther
Support Feminist Media!
During these troubling political times, independent feminist media is more vital than ever. If our bold, uncensored reporting on women’s issues is important to you, please consider making a donation of $5, $25, $50, or whatever you can afford, to protect and sustain BUST.com.
Thanks so much—we can’t spell BUST without U.