The Best Moments from the 2019 Grammy Awards

The 2019 Grammy Awards were last night, and women won big, even making history in the process. Here are some our favorite moments from music's biggest night:

Her emotional acceptance speech made us love her even more. As Jezebel reports, “the first woman to ever win the award was Lauryn Hill, as part of the Fugees, in 1997," but this was the first time a woman won on her own. So Cardi is in good company indeed!

Alicia Keys somehow defied the laws of physics and played two pianos at once.

My musical talents begin and end with knowing a grand total of one song on the ukulele. I literally do not understand how she is doing this, but I am HERE FOR IT. (She was also paying homage to legendary jazz pianist Hazel Scott, whose story you should absolutely read about on Jezebel.)

She literally performed at her own tribute like the country queen she is.  (Also in case you didn’t realize how much of a legend Dolly Parton is, here is our 2014 interview with her.)

In that red dress? We are truly blessed. Ross performed two of her hits "The Best Years of My Life" and "Reach Out and Touch (Somebody's Hand)."

It's official: @DianaRoss' grandson has the cutest #GRAMMYs performance introduction of the night. ? pic.twitter.com/tITfJMnKOc

When I was 9, I went onstage at theater camp in a blonde wig to sing “Popular” from Wicked in front of an audience of parents. Suffice it to say, Raif-Henok has me beat.

Diana Ross wished herself a happy bday in front of a national audience.

In my humble opinion, there is a shortlist of adults who should actually care that much about their birthday. Diana Ross is firmly on that list.

St. Vincent and Dua Lipa with the same haircut and all the chemistry.

Short hair don’t care ?? @St_Vincent and @DuaLipa take the stage together at the #GRAMMMYs!!! pic.twitter.com/Mvb02Q8n90

I’m always here for a coordinated look and a badass guitar solo, and these ladies BROUGHT IT.

Carlile was also the night’s most nominated female artist.

Kacey Musgraves winning for Album of the Year! 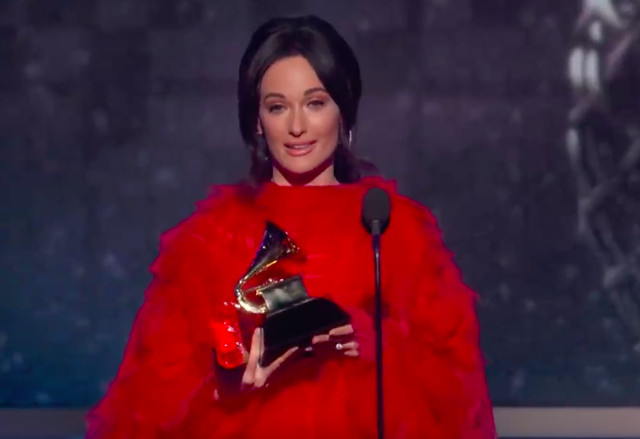 Look, art is subjective, and Cardi B and Janelle Monae also put out great releases this past year. But in the end, Kacey’s Golden Hour was a beautiful, shimmery country pop album, and her win was well-deserved. (You can ask my Instagram followers how often I yell at them to listen to it, and now with the reach of a media company, I will continue to spread this message far and wide!)

For obvious reasons, her mere presence warranted a standing ovation. She appeared on stage with Alicia Keys, Lady Gaga, and Jennifer Lopez to introduce the show. Truly, legends only.

Michelle, we miss you so much! I know it’s not constitutional, but come back, please!!!

What Is The Resistance Revival Chorus? Meet The Women Who Backed Kesha At The Grammys

Tags: Cardi B , Dolly Parton , Diana Ross , Kacey Musgraves , Michelle Obama , Grammy Awards , Grammys 2019
Support Feminist Media!
During these troubling political times, independent feminist media is more vital than ever. If our bold, uncensored reporting on women’s issues is important to you, please consider making a donation of $5, $25, $50, or whatever you can afford, to protect and sustain BUST.com.
Thanks so much—we can’t spell BUST without U.