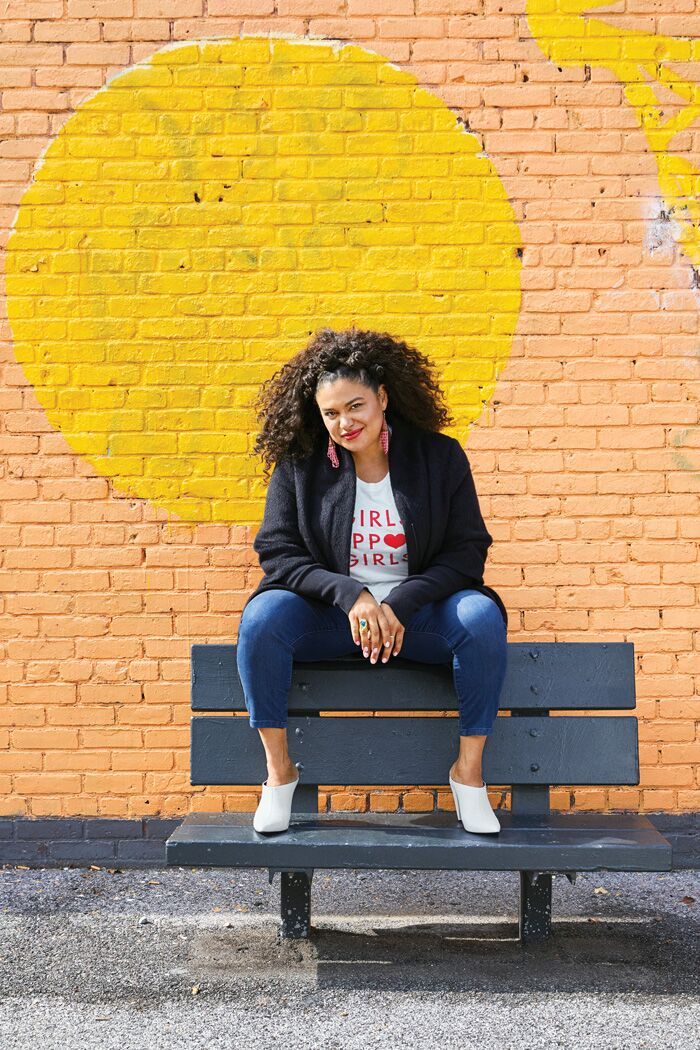 It’s Halloween afternoon when I go to meet Michelle Buteau on the Harlem set of her new BET show, First Wives Club. In her trailer, Buteau is dressed in black ripped jeans and a light green shirt with flowers and birds on it. Her hair is a beautiful collection of curls, and she pulls out a bobby pin as she gets comfortable. Even without makeup, her face is glowing, warm, and inviting, with a perfect peppering of freckles. With The Miseducation of Lauryn Hill playing in the background, the atmosphere is like sitting with a friend, even though I’m interviewing one of comedy’s fastest rising stars. “It’s feast or famine, that’s definitely the nature of the business,” Buteau says when I ask about the past year that led to this moment in this trailer. “Either you’re not sleeping because you’re working or you’re not sleeping because you aren’t working and you’re like, ‘Fuck! Why am I not working?’”

This past year, Buteau has definitely worked. Though she’s been doing standup since 2001, her recent appearances alongside Jessica Williams and Phoebe Robinson on their 2 Dope Queens podcast and subsequent HBO show of the same name, and on her own amazing podcast, Late Night Whenever (named “one of the best podcasts of 2018” by Time Magazine) have launched her onto another level professionally. And all of these projects have been ideal showcases for her delightfully candid—and at times raunchy—brand of humor. In her comedy sets, Buteau frequently refers to her vagina as “The Holland Tunnel,” because her husband, photographer Gijs van der Most, is Dutch.

But her jokes about their sex life don’t stop there. “I really do love him,” she once told a rapt crowd in N.Y.C. about van der Most. “He’s white, but I like him anyways. He’s adorable. He’s European, so he’s, like, vintage white. That’s O.G. Caucasian. And what’s so crazy, is that when I was dating him, my friends were like, ‘He’s European? How do you deal with all them Christmas presents under the tree?’ I was like, ‘Bitch, you peel it like a banana and you have breakfast!’ Hey! That’s a foreskin joke! It’s just like having some extra skin up on your chicken. It’s tasty! Salty! In the Points system!”

All this hilarious dirty talk has brought her to the attention of both comedy fans and casting agents alike. And now, at 41, she is co-starring in the hotly anticipated black remake of First Wives Club. Originally a 1996 cult classic film starring Diane Keaton, Goldie Hawn, and Bette Midler, this version is a Harlem-centric TV series helmed by Tracy Oliver, best known for co-writing Girls Trip and for appearing on Issa Rae’s web series The Mis-Adventures of Awkward Black Girl.

In the television remake, three black women—Hazel (played by Jill Scott), Bree (played by Buteau), and Ari (played by Ryan Michelle Bathe)—band together after their marriages fall apart, finding strength and sisterhood in each other. “I’ve already dubbed us the brown titty team,” Buteau says. And though both Buteau and Scott are fabulously curvy women, their characters have vastly different styles. Hazel is more fashionable, while Bree is an overworked mother. “[Jill Scott] gets a lot of the stuff that I’d love to wear in real life,” says Buteau. “I’m playing a working mom, a surgeon with two kids who is maybe getting a divorce, but, like, she doesn’t need a makeover on the Today show…yet.”

But while her character isn’t dressing for the Met Gala just yet, Buteau says the First Wives Club wardrobe department is still doing her “2 Dope Queens” (one of her many nicknames for her breasts) justice. “The great thing about television now, especially in predominantly all-female casts, is that just because you happen to be a plus-sized woman, you don’t have to make a joke about it. You just are who you are. Fashion is starting to step up and be like, ‘Oh yes, titties need to be dressed, too!’ And people are starting to love their inches. Sometimes you feel like the skinny girls get the best clothes, but that isn’t the case here. The wardrobe department has been really amazing.”

There have been times before, on other sets, where Buteau has wondered, “Are they gonna put me in animal print?” and “What’s the hair gonna be like?” But on First Wives Club, diversity happens from the top down, with women of color on board at every level who are trying to bring a vision to life that is not just entertaining, but also trying to capture a lived reality. “You have to showcase everybody because diversity matters,” Buteau says. “You have to give people a chance in all communities. Tracy Oliver knows that diversity and storytelling are important. She wants to make sure we have all lived a life and gone through something. And if it wasn’t for artists like Issa [Rae] and Donald [Glover] wanting to share their stories and getting greenlit and then winning all these awards, who knows if this show would even be made? This administration is trash, but at least I’m alive for the black girl reboot of shit.” 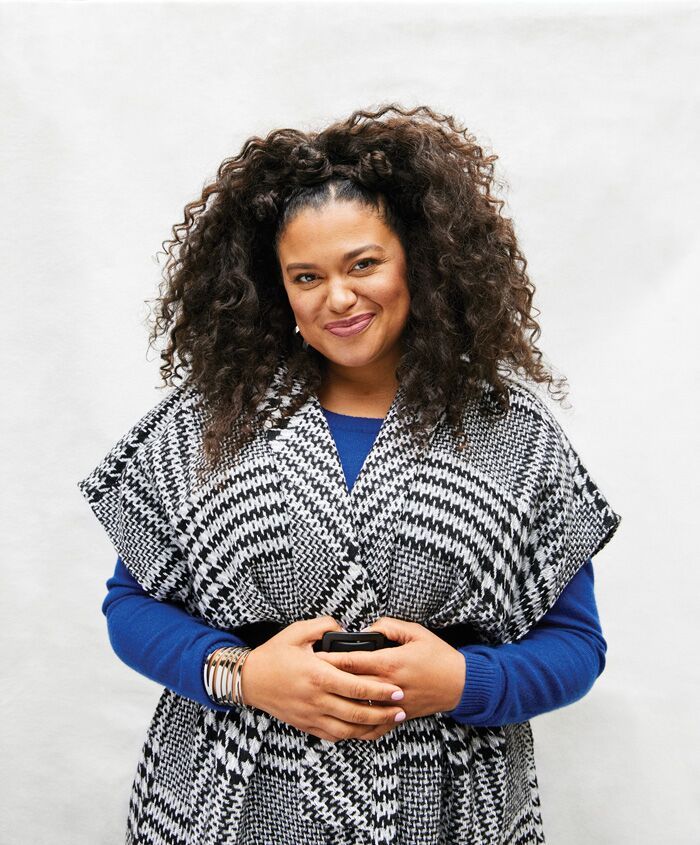 Many of Buteau’s fans first became aware of her comedy through her WNYC Studios podcast, Late Night Whenever. When I attended a taping in lower Manhattan, her guests were actor and comedian Jason Jones and the Tony Award-winning Hamilton star Leslie Odom Jr. Throughout the episode, Buteau encouraged her guests to really dig deep and share something of themselves through humor, in front of a live audience. With a combination of sharp wit and self-deprecating asides, she easily made her guests open up, because she had no problem doing it herself. “We are all just fucking people at the end of the day who want to be loved,” she says of her interviewing style. “So let’s fucking act like it’s a dinner party with no dinner and just see what the fuck happens, you know?”

This sort of devil-may-care attitude toward being creative on the fly partly stems from Buteau’s New Jersey upbringing as an only child. But she’s also constantly working not to not be pegged as just one thing because of her appearance. “When it comes to comedy, people always want to put me in the ‘sassy’ lane,” she says. “I’m, like, ‘Look—do whatever you want to do, I’m gonna show up and do my thing. Just make sure the check is written out to Michelle Buteau, Inc.’”

When I ask Buteau if she’s a feminist, her response is perfect. “Yes, equality bitch, yes. And if you are not—unfollow.” She also, however, understands why some people struggle with the term. “People have this bad taste in their mouth when they think of a feminist because of people like Trump,” Buteau explains, pointing out that alt-right propaganda portrays feminists as loud and violent. “It’s just women out here saying, ‘Can I live?’ It’s like what Ruth Bader Ginsburg said, ‘Can you take your foot off my neck so I can live?’”

When it comes to being an outspoken feminist in the dude-dominated world of comedy, Buteau knows her aforementioned husband always has her back. He’s cool with his foreskin and his funny-sounding name showing up in Buteau’s act, and he’s also a tried and true partner. “Being with a dude who is also a feminist and woke-as-fuck and European—he’s like my suit of armor,” she says. “Nothing [sexist] can go down. I don’t even have to speak up, because this intelligent dude will be next to me being like, ‘You’re wrong and you need to hear what she’s saying.’ That’s really comforting to have.”

That comfort and support will be especially helpful as Buteau makes her next big career move—creating an hour-long comedy special. “I’m not doing it to make money or to put it on a certain network,” she says. “But I just have this thing in me that I need to share. And to me, that’s really special.” She’s also just signed a book deal, so there will soon be a whole new medium for audiences to enjoy her singular voice.

Towards the end of our interview, food is delivered to the trailer for Buteau. Without missing a beat, she asks if I want any, and in that moment I can feel what makes her such a great host and comedian. She’s a genius at making people feel at ease.

We share laughs, tell dad jokes, and eat together, and I watch her make a perfect shot into her trash can from the couch when we’re done. It’s easy to root for Buteau based just on her talent, her drive, and her kindness. But she also knows how to make a person feel seen, whether you’re in an audience full of people or in a hot-ass trailer on Halloween afternoon.