Christeene And Rebecca Havemeyer Have Officially Landed In NYC 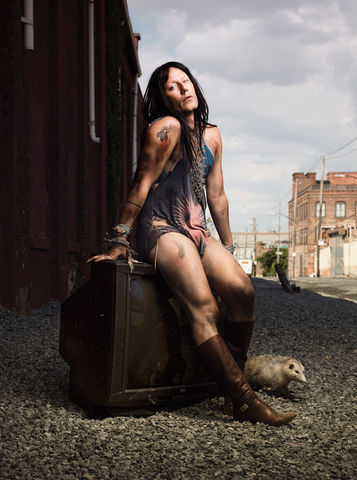 Paul Soileau, the brilliant "drag terrorist" behind the characters Christeene and Rebecca Havermeyer, is now based in NYC! Hooray! Christeene, the “human pissoir of raw unabashed sexuality” is coming to Trans-Pecos in Queens, NY with a new show next week on Tuesday, February 5 at 8:00pm. The show will feature musical performances by other New York-based bands and artists including Pictureplane, bottoms, and Hairbone.

Soileau, who was previously profiled by BUST (which you can read here) and who was born and raised in the South, has said that Christeene doesn't have a real backstory other than, "She was born in the dirt." She has been developed over the course of nine years, all the while coming up with her own unique spin on rap and music performance. Her top hits include "Fix My Dick," "Tears From My Pussy," and "African Mayonnaise." Over the years, Christeene has befriended and collaborated with other genderqueer artists, including Peaches.

Christeene’s performances are known for their intimacy and macabre nature. They combine horror-esque theatrics with gender-bending humor and charm. Let’s just say it’s not unusual to see both butt plugs and balloons onstage. We’re excited to see what else this show has in store!

Buy tickets to the Trans-Pecos show here, and check out Christeene's two albums on Spotify, Waste Up, Knees Down and BASURA.

Soileau's performances don't end there. Another drag character he's developed over several years, Rebecca Havemeyer, is beginning a monthly show called Homo Armageddon at House of Yes in Brooklyn. Havemeyer is a more traditional drag character than Christeene, but nothing about Homo Armageddon will be traditional. The event is promoted in Havemeyer's voice, and she describes the show as, "A nonstop cornucopia of entertainment all ground up and geared at preparing y'all with everything ya' need ta' know for surviving tha' mysteries and madnesses of 2019!" She promises the show will have "Song! Danse! Special Guests! Macabre Testimonials! Winning Ignorance!...and more!" Sounds like a winning combination to us.

Tickets to Homo Armageddon are $15-$30 and can be bought here. The show is the first of the new monthly series is on Wednesday, February 20 at 8:00pm.