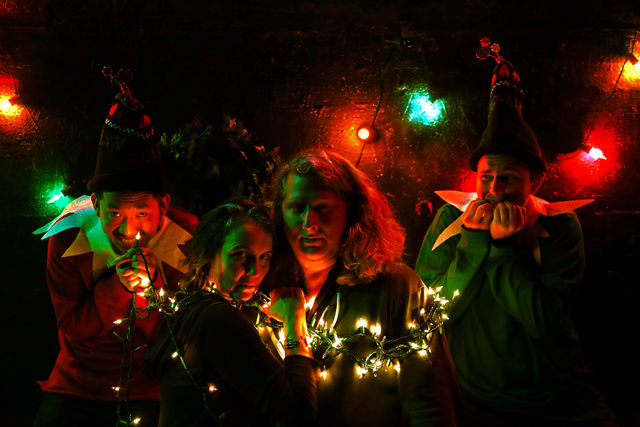 Mrs. Claus is not such a minor figure in my husband Greg Kotis’ apocalyptic holiday play, The Truth About Santa. In fact, she comes close to destroying the world, so hellish is her fury when her husband returns from his annual mission with his sexy mortal consort, and their two half-mortal children, in tow.

The costume designer ordered a pair of funky red plastic glasses for Mrs. Claus online. They made me look like a gallery owner by way of Peewee’s Playhouse. Everyone involved agreed that it was a fun idea, after which we shipped ‘em back.

“She should look traditional,” my playwright husband harped.

“What do you mean ‘traditional’?” Like many couples, a straightforward word is often gang-pressed into serving two wildly disparate ideas. It all depends on who’s speaking.

“Recognizable as Mrs. Claus!” he cried. Which worried me, a bit. My image of the character has been heavily influenced by the way he depicts her in The Truth About Santa, as an avenging goddess, with explicit nods to Greek and Norse mythology.

Greg has invested his Mrs. Claus with both cunning and supernatural powers. She engages terrified elves in spectral combat. Spikes her home-brewed candy wine with poison. Pursues Santa’s human family across the tundra in an igloo car. Kind of like Tilda Swinton’s icy white queen in the Lion, the Witch and the Wardrobe, with an aging, regular-sized neck.

What if he, author of my new image, still sees her as something close to my maternal grandmother (as opposed to my paternal grandmother, who wore two-piece swimsuits well into her 70s). “Don’t make me wear a mobcap,” I said.

Then I hedged my bets by cracking wise about mobcaps to the costume designer, who assured me that I need not worry.

Unleashed from the “traditional” headgear, I hit the discount beauty supply store for a horsetail length of synthetic hair to encircle my skull like a braided, holly-berry-trimmed crown, worthy of Hera.

I also got permission to wear the witchy black thrifted Fluevog boots that have been a staple of my 40s and now 50s. They make me feel powerful.

I have reached an age where I feel Mrs. Claus is deserving of recognition. I’ll understand if those who don’t get a chance to see our Off-Off-Broadway production don’t buy into the concept of Mrs. Claus as badass, but perhaps they might find a universal echo of Hilary Clinton? Another universal name whose husband loomed large, and seemingly more lovable…at least until recently.

I say we liberate this woman from the background of every Christmas card and holiday special.

Maybe next year she should get to fly the sleigh.

The Truth About Santa, an apocalyptic holiday tale by Greg Kotis, plays December 6-20 at The Tank in New York City. Tickets and more information here.

These Photos Of "Fawngirls" Are Eerily Beautiful

5 Vital Travel Tips For Your Next Crazy Adventure