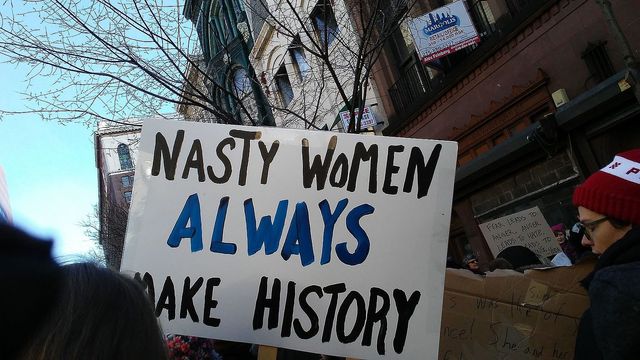 I recently had the pleasure of attending #NastyWomen, a female resistance comedy series. It was the first show in a series of four which will be spread out through this winter and spring, put on by the 14th Street Y Theater in the East Village.

This was incredibly exciting for me, as I love stand-up comedy, but can’t recall a single cis male comic I’ve seen that I enjoyed. Shout out to all those who have asked me over the years upon this disclosure: “Do you even have a sense of humor?” Well, yeah, I’m funny as fuck and I know funny shit when I see it, I just don’t need to hear another joke about some guy's junk ever again.

#NastyWoman is put on by Laura Newmark, with the help of various other badass folks who collaborated on lighting, sound, and more to bring the production to life. She describes the event as “a forum for female comedians that empowers all through laughter, camaraderie and tangible activism tools.” It is particularly inspired by the Women’s March, and is extra relevant in the aftermath of the #MeToo, #TimesUp, and #NeverAgain movements.

The featured artists were Iris Bahr (Curb Your Enthusiasm, Svetlana), Mitra Jouhari (Full Frontal with Samantha Bee, The President Show on Comedy Central), Marcia Belsky (Handmaid’s Tale: The Musical, The Headless Women Project), and Dulce Sloan (Correspondent, The Daily Show with Trevor Noah), all up-and-coming, successful women making a mark on the comedy scene. Amanda Duarte, co-creator of The Pussy Grabs Back campaign, hosted the show while decked out in a full-body leopard print jumpsuit.

Dulce Sloan ended the show on an equally hilarious note, explaining how she won’t mess with broke men now that she’s famous, but lamenting over how broke d*ck is the best. The entire show ended with Sloan stating, “Broke men have to be good. They have to be so good that they put you to sleep at night. So they have somewhere to sleep.”

The rest of the installments of the #NastyWomen shows will happen in 2019, with the next falling on January 28th, and the following two on April 15th and May 20th. The January 28th show will partner with inKind Space, an app that supports women with breast cancer, and the April 15th show will feature a line-up of exclusively transgender women comedians–an important move away from the gender essentialism the movement for women’s rights can often take on.

It was a beautiful night of fun, connection, and comedy and we hope to see you at the next!

You can get tickets and learn more about the event here.

Amy Poehler Interviewed By Rachel Dratch: From The BUST Archives

Tags: #NastyWomen , comedy , stand-up , women , theater , #MeToo , #TimesUp , resistance
Support Feminist Media!
During these troubling political times, independent feminist media is more vital than ever. If our bold, uncensored reporting on women’s issues is important to you, please consider making a donation of $5, $25, $50, or whatever you can afford, to protect and sustain BUST.com.
Thanks so much—we can’t spell BUST without U.