The Play "Mary V" Shows The Power Of Women's Anger 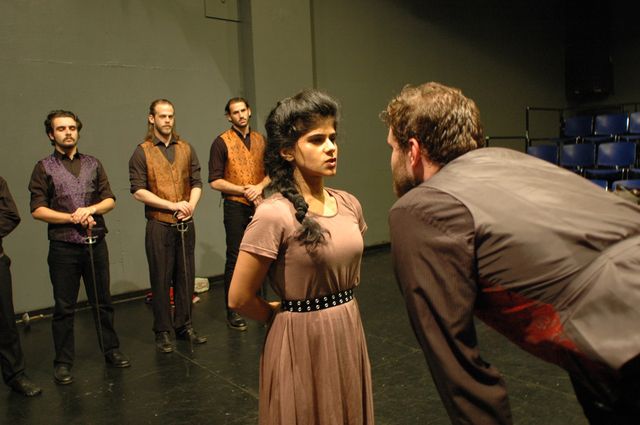 At 33, playwright Rebekah Carrow dramatically altered her career path. She had moved to New York City to become an actor, and after her move, received some advice from a casting director that caused a paradigm shift. She asked him what she needed to do to land a lead male role in a Shakespeare play as a woman. “He said to me, ‘You’re going to have to get super-famous first and then people will let you,’” says Carrow. Her response? “Ain't nobody got time for that!”

She didn’t need permission to be let into a cast. So she decided to write herself in. She recalled the conversations she had when she worked directly with survivors of sexual and domestic violence for 10 years. These everyday conversations about rape and violence evolved into her powerful first play, Mary V, a modernized, gender-role reversal of the original Shakespeare classic Henry V.

The main focus of the play is on the tension between a group of actresses and actors commissioned to play Shakespeare’s Henry V. Quickly, the group of actresses finds themselves shoved off-stage when an all-male cast claims they were originally commissioned to do the play. Starkly divided by their gender, they battle for their turf. However, in this hyper-heteronormative world that Carrow depicts, power deeply corrupts both sexes as they dominate the stage.

“In writing this, my activist brain kicked in and bits and pieces of the play were lots of different stories […] And while we talk about this, there’s stories within our cast, within our friend groups…unfortunately we’re drowning in survivor stories,” says Carrow, who also plays the lead, Mary.

The play’s director, Anna Rebek, found resonance with Carrow's sentiments as we three spoke after the play's performance at the New York International Fringe Festival. In a crowded bar, we spoke about feminism, trauma, and how Carrow's play is more relevant than ever when we recall the horrific moment Dr. Christine Blasey Ford recalled her trauma in front of the entire nation.

“We’re in a moment where things are breaking and leaking a little bit. But it’s always running underneath, and it just so happens to be at a tipping point right now publicly in the media. We have a right to be angry about things that have happened to us, we do have a right to bring that anger into a public space and talk about it, and take space within that anger,” reflects Rebek.

The two are extremely interconnected on the feminist vision of their play. “In this moment where we’re having such a larger conversation about these issues, I’m already burnt out because that was my life for a long time,” says Carrow.

Mary V represents itself as a feminist Shakespeare play, exploiting the gender binary at its extremes and the toxic heteronormativity that thrives within those boundaries. Before the play, and during the intermission, voice recordings of toxic male attitudes towards female empowerment pierce through the audience. I immediately become immersed in the this world, my anger building towards attitudes that I and many other women are familiar with.

Together, Rebek and Carrow explore how to take pieces from Shakespeare’s play and turn it into a feminist critique on power and trauma. They focused on creating a world where watching the play’s lead, Mary, be as selfish as her male counterpart, Henry (Isaac Beauchamp), is extremely entertaining. The two are more alike than different, as they’re both eager to win. Even their manipulative, sexual prowess mirrors one another. Watching the two embrace each other’s madness becomes a a turbulent, mesmerizing, equalizing dance on stage.

Mary, herself, is a “highly conflicted character,” Carrow admits. Mary must do anything to protect her female warriors while also protecting herself, even if it means war. “I wanted to show a very human woman where in a war, how does she react? War makes us do dirty, gross, disgusting things, and too often Henry V plays this pure form of war that is heroic,” says Carrow.

Rebek goes onto to say that one scene in particular resonated deeply with Shakespeare’s Henry V. Part of the original play involves Henry going into the camp to secretly listen to his soldiers talking about their fears. He later uses it against them to inspire them to fight in battle. As Henry and Mary battle for space of the stage, the conversation extends to the forces of manipulation they both use. “It’s not who does what healthy way, they’re both tactical thinkers,” says Rebek. “Henry even adopts a new language for women, that’s his version of these kind of leadership tactics to unify and embolden his team, so you get a chance to see how women and men manipulate people. They’re not good choices.”

The leadership tactics used by Mary could be potentially harmful for survivors of rape and trauma; she encourages them to tell her the names of their oppressors. “TELL ME!” she screams in the face of Katherine (Katrina Phillip), a character who is the love interest for both Henry and Mary. “In Mary’s mind, in that moment, there is no choice not to fight," says Carrow. "And the only tools she’s got is to remind them of their trauma and use that to unify them in order to stand up against what’s coming.” 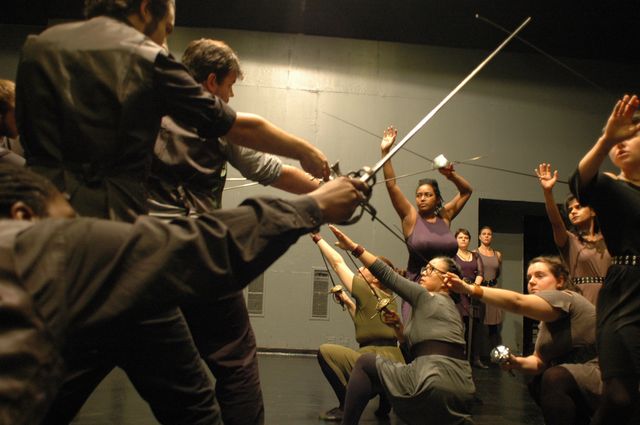 Mary's character wouldn't be out of place in Game of Thrones or Black Mirror. She is engagingly kind and relatable, and yet she is the perfect leader who will stop at nothing to prove her worth. She is set up to succeed, and uses the tactics men have so clearly portrayed in TV and film to get her way at any cost. There are lots of emotional exchanges in the play, where characters must sacrifice a part of who they are to get what they want. Mary’s role is “not a pretty form of leadership or an empathetic way to go about doing it. It’s nasty, and it’s a tactic to bring these women together and to move forward,” says Carrow.

“So it’s like that take on the Audre Lorde quote, ‘The master’s tools will never dismantle the master’s house'?” I ask Carrow, curious for her response. “Yes, exactly," she says. "And that line was in prior rewrites of the play. With most movements for social change that I’ve studied, they use violence as a tool to get their point across, feminism not so much. Generally, the feminist movement is not known for violence. It’s because women love men because we grow up with men, we don’t want to hurt men and ultimately if we hold onto that, we can ultimately change everything instead of saying ‘fuck you, you’re the enemy.’’

Carrow has created a world where women are equal to men in both emotional and physical turmoil. Characters are literal gender-swapped mirrors of themselves; the female and male roles are even named the same. However, the character of Katherine flips the script and creates a noticeable division of the sexes.

Katherine is a love interest for both Henry and Mary, and the audience first sees her as a self-serving, power-pleasing individual. A first, we are introduced to the devastating queer backstory of Mary and Katherine, where Katherine willingly left Mary for Henry. Katherine notices a certain appeal to the patriarchal system that has been carefully crafted by Carrow, and her character is meant to use that to get ahead. Katherine presents herself as an anomaly, turning her back on the female characters in the play to please the male gaze.

However, it is Katherine’s transition out of the gaze that is so fascinating. Under Rebek's direction, Katherine’s clothing shifts from an exposing red dress to a gray smock. This is an obvious de-objectification of her character. She is literally stripped of her guise, and is left with relying on her sisters. “Katherine has to find an empowering self,” says Rebek. “It’s like when you’re in a relationship and you know you could do better but you stay. And that has a lot to do with the self esteem that women develop based on external signaling that we do in our culture.”

The play focuses on maintaining the gender binary by illuminating toxic heteronormativity in all of the characters. Each of them are struggling to maintain and live in this gender-biased environment. Carrow and Rebek have admitted that they originally had different views of the play’s ending, but the recent accusations against Brett Kavanaugh and Dr. Ford’s testimony shed light on how the play would end. It solidified their decision to go “dark,” as they each put it.

“The Kavanaugh hearings happened in the middle of while I’m trying to debate whether to go dark with the end or finding a lighter way to end," says Carrow. "We have a Supreme Court Justice in the highest court of the land who has been accused by multiple women, but has not been fully investigated for that. The woman who came forward, received death threats because she can’t speak her truth. So I thought, yeah, we’re going dark with the end.”

The end of the play resonates deeply with a survivor, her trauma, and ultimately getting payback. “What do women do with the top? Do I have the opportunity to personify someone we could all admire or do I show true feminism which is equality between men and women, that power can corrupt both? “ asks Rebek, solidifying Carrow's decision to go dark with the end of the play.

The play is a reflection of the larger conversations we need to address as a society. Even in its creation, Rebek paved her direction to correspond with her actors to be able to utilize the stage as a safe space. “You really have to trust the people in the room when you make a piece that is this triggering,” she says.

Leaving the play, I couldn’t help but wonder if Mary’s tactics could save us from Trump and the inevitable politics against women that we’re bound to face in the future. We could definitely use an unstoppable leader like her to save us from a dystopia, flaws and all.

Interested in seeing Mary V? Learn more about the play here. Mary V is playing in in New York City as part of FringeNYC through October 28; get tickets here.

This pot originally appeared on Fembot and is reprinted here with permission.

In Broadway's "Head Over Heels," The Go-Go's Music Is The Star

This Brooklyn Theater Troupe Is Staging A Gender-Swapped "Macbeth"

Fembot magazine is a digital siren call concerned with the need for diverse voices in intersectional feminism and social justice. By inviting marginalized folk to share their feelings with the world, our mission is to create a diverse and safe online community of writers and creators. We aim to share with you a platform that ignites conversations and allows for diverse perspectives. Popular websites for women are generally run by white men in power. We want to take back our space on the internet by giving you a site that promises no click-bait, no gimmicks, just real perspectives that educate and empower.  Follow Fembot on Instagram & Facebook @Fembotmag.

Tags: Mary V , theater , Rebekah Carrow , Anna Rebek , FringeNYC
Support Feminist Media! During these troubling political times, independent feminist media is more vital than ever. If our bold, uncensored reporting on women’s issues is important to you, please consider making a donation of $5, $25, $50, or whatever you can afford, to protect and sustain BUST.com. Thanks so much—we can’t spell BUST without U.