In Broadway's "Head Over Heels," The Go-Go's Music Is The Star 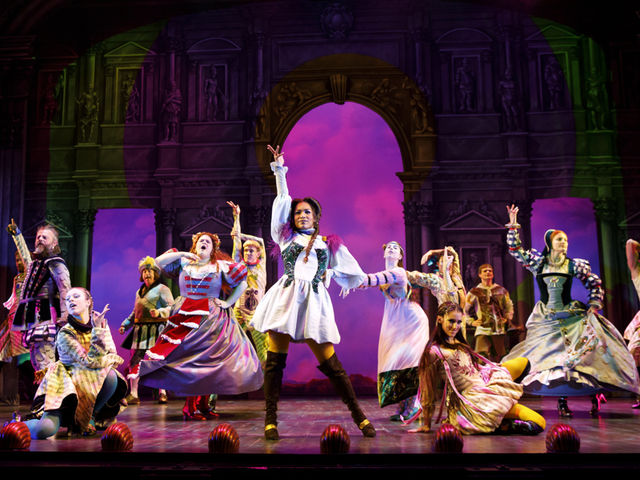 Broadway has a new musical and I caught it during the last leg of previews. I showed up to the performance not knowing anything about the show except that it featured the music of the Go-Go's. But as for what it was actually about? Who knew? Definitely not me. I didn’t want to know. I wanted to be surprised. And I was. Pleasantly.

When the curtain first came up at the Hudson Theatre, I saw the costumes, heard the dialogue, realized it was set in olden times of yore and I wondered—as is the case with any good party—what in the hell I’d gotten myself into.

I initially found myself wishing Head Over Heels was about the girl band’s inevitable antics: Touring, getting guys, doing drugs. You know, the juicy stuff. (I suppose tourists wouldn’t have exactly gone in for that kind of thing, so the writers went anther way.) Instead, it was about an aristocratic girl in a small, mystical town in love with a boy who is beneath her social status. A servant, if you will. Said servant dresses as a girl to stay near his beloved. Mayhem ensues, lesbian love blooms, trans love is re-kindled, a marriage is put though a trial, and a lover is lost. Well, sort of.

Yes, it was a lot, but I managed to keep up—thank you very much—because the performances were so strong and the lighting, stage design, and situation were so colorful that I couldn’t pull my eyes away from the stage. On top of all that, the whole ridiculous situation was at times laugh-out-loud funny.

Head Over Heels has a story line that faintly resembles Shakespeare in Love, which garnered Gwyneth Paltrow her Oscar for Best Actress in 1999. This is fitting because she is one of the show’s executive producers. But more than that, she was a teenager in the '80s. And if you were an American teenage girl during that time, trust me, you were jamming out to the Go-Go’s. I know I was! I was such a big fan that a few of my high school homegirls caught them live in Central Park a few summers ago. Needless to say, they rocked. It was at that performance that I realized that their campy, girlie MTV music videos really didn’t do them any justice. These are serious songwriters, musicians and performers.

In this setting—the Broadway stage—the music transcends place and becomes timeless, which is what great music should do. So, even people who didn’t grow up with the Go-Go’s or their music (millennials, maybe?) will enjoy this show.

In the end, the cast received a well-deserved standing ovation. Amidst the accolades, the curtain rose to reveal a live, all-female band that had been playing the entire time. It was awesome. It wasn’t as awesome as seeing the actual band perform live but, for Broadway, this was the next best thing.

The Go-Go’s On Tour!

17 New Albums To Get Obsessed With Before 2017 Ends: Playlist

We Got The Beat: Awesome Lady Drummer Roundup

Kerika Fields Nalty is a Brooklyn-based writer and photographer whose work has appeared in The Daily News, The Source, Variety, Vibe and numerous other print and online publications. Her most recent contributions have been to MsXFactor.com, Currlynikki.com, and Tuenight.com. The author of He's Gone...You're Back! The Right Way to Get Over Mr. Wrong also enjoys speaking and has been a panelist at Bindercon NY, Sister 2 Sister Summit, and National Book Club Conference. Visit her at  withyourbadself.com.