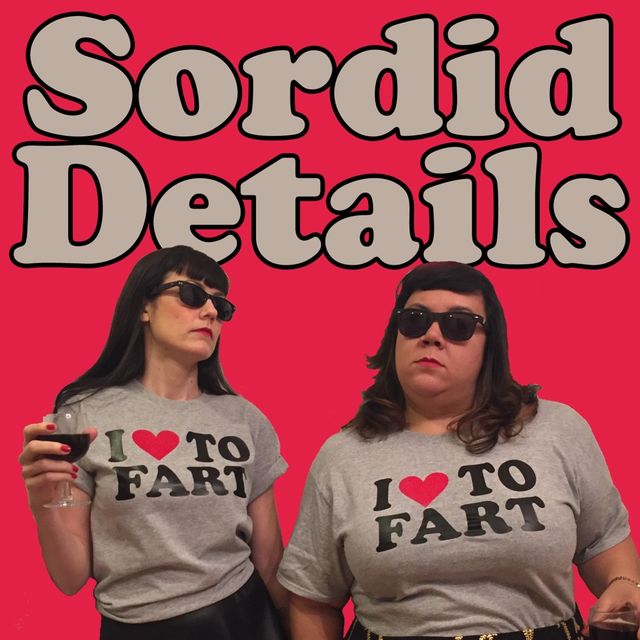 The comedian April Richardson left holes in many hearts when she wrapped up her popular podcast Go Bayside, in which she and her guests picked apart every episode of the '90s sitcom Saved by the Bell. In a new podcast dubbed Sordid Details, she's back, along with co-host Millie De Chirico, for another deep dive into shallow waters.

Could Forrest Gump really run across the country in those sneakers? What’s the timeline for becoming a ghost? Which fast food chains are worth the diarrhea? Those are just a few of the questions tackled on Sordid, which is about as nutritious as the Pizza Hut pies and fountain Cokes extolled in episode 16. But that’s the point. Listening to two funny friends gabbing is exactly the kind of escape many of us are hungry for these days.

Richardson is best known for her role as a writer and commentator on Chelsea Lately, her appearances on @Midnight, and an explosive laugh that sounds like a shout. De Chirico, a pop culture addict who polished her silver tongue as a college radio DJ, is now the programming manager for Turner Classic Movies and FilmStruck, the network’s new streaming service. The two live in Los Angeles but grew up in Atlanta, where they’ll return on July 23 to record a live podcast episode at the Highland Inn Ballroom Lounge.

Just before their homecoming, we chatted with these best buds to find out why, in their own words, Sordid Details is a trashy treat worth bingeing.

Tell us about how you two met.

April Richardson: Freshman year of high school, 14 years old, I was walking down one of the halls, so proud of my newly acquired Smiths T-shirt. Literally zero other kids said anything to me about it, despite my strut and how clearly cool I thought it/I was. I passed Millie on the way to some class, and she said, "Cool Smiths shirt!" I lit up. We had friends in common and I already knew who she was, but I think that was the first time we spoke. Right, Mills?

Millie De Chirico: Yes! Little did I know that mentioning the Smiths would kick-start a 20-year-plus friendship! But back in those times, if you saw someone that looked cool and liked bands you liked, they really stood out from the crowd. You had to try to be friends with them. 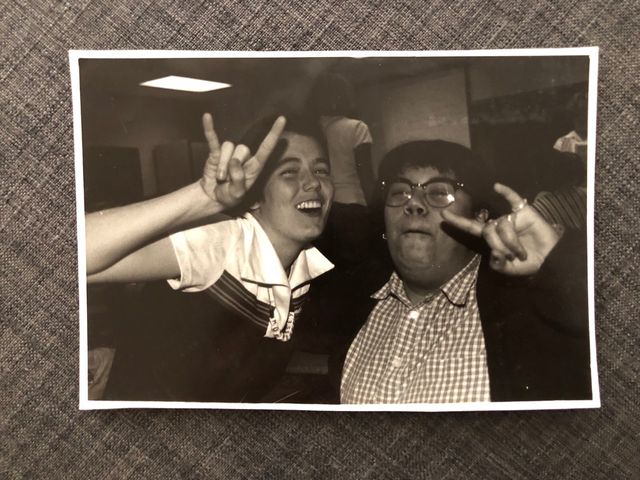 young April (L) and Millie (R)For the podcast, why did you decide to focus on, in your own words, “matters of least importance”?

AR: The most fun I have with Millie is when we really try to figure out unimportant things. She's the only other person I've known throughout my life who is game for totally dissecting dumb shit in an almost academic way. Things that people take for granted or things that people just don't even look twice at, we can discuss for hours—just the most idiotic stuff, like, "Seriously, what do you think is the business model for this weird product we just saw in this infomercial?" Millie once texted me, "What do you think happens to doves after they're released in magic shows or weddings or whatever? Do they come back?" That was the jump-off for an hours-long conversation.  People around us would often think that kind of stuff was funny, but there's a big part of us that is earnestly trying to figure it out!

I was obsessed for a while with the whole "moustache rides, five cents" thing and how it started, because it's always written in like, old timey saloon font, and five cents would have been like, $100 back then. Yet the price hasn't changed in the joke for inflation ever. Millie was the only person to try to seriously help me find the origin story of this seemingly centuries-old Spencer's Gifts T-shirt joke, but the internet is useless if you're trying to find serious factual info about a goddamn moustache joke.

MD: I’ve always found highly observant people super funny. I especially gravitate toward people who have paid way too much attention to pop culture because that’s what I did growing up. When it came down to deciding to do a podcast, I think we both were just like, "Why don't we just record these ridiculous conversations we've been having and see what happens?" We didn't really think of it as an "angle." We just thought, "We're good at riffing on dumb stuff, so let's just do that and have fun." Plus, for me, it's great to just talk about some nonserious stuff for a little while, especially when you spend all day in the news cycle and on social media, which feels very dire and unfunny most times. Instead of using up my passion and energy to engage a dumbass on Facebook about politics, I’d probably rather discuss fast food menus or ghosts and laugh about it with good friends. It’s basically a release for me.

Thanks to social media, lots of people these days are presenting perfected versions of themselves. But you two are open about your foibles—and even your bowel movements—on Sordid Details. Why? Is it a conscious effort, or does that kind of honesty come naturally to you?

AR: I think it comes naturally, but it's also a conscious effort, because we don't really ever edit anything out. I think a huge reason why Millie and I bonded so early on was because we've both been told our whole lives that we were too loud, too "unladylike," took up too much space. We were always made to feel weirdly guilty about those things we just inherently WERE. We couldn't change those things, and I think as we got older and more confident, it just morphed into, "Well, what the fuck am I going to do about it but embrace it?" A really surprising and richly rewarding bonus of doing this podcast is the feedback we get from other women our age in similar positions. We get great emails reassuring us that there are other grown women out there who feel and act and talk like we do, who grew up feeling pressured to temper their "weirdness" or "grossness" or whatever, and who have been comforted by the fact that we, well, don't. That's rad.

MD: Exactly. I get a lot of strength from those emails, too. As I've gotten older, I've become way more relaxed in who I am. And honestly, it's a relief. It feels like real work to have this perfectly curated personality for the world to see! I'm not leaving out the unsavory bits about myself anymore. If you like me, you accept everything about me. I think April feels the same way, and at the end of the day, we really can't help being honest. We've talked about all kinds of cringe-worthy subjects on Sordid Details, from getting older to money to loneliness to having to run to the bathroom after drinking a milkshake. We know some people probably think we're nuts, but fuck it. We leave it all in.

There’s so much great scripted and stand-up comedy out there now, yet people also seem to crave eavesdropping on real, freeform conversations like yours. Why do you think that is?

AR: As someone who performs that prewritten stand-up for a living, I think there really is something exciting about knowing people are riffing on the spot. People know that if one of us says something really funny, we just thought of it that second, and that's extra fun. And I have to say, I riff with no one else the way I riff with Millie. I hang out with professional comedians all the time, and she is by far the funniest person I've ever known in my life (SORRY, PROS!). So what I can do with her on a podcast is so different from what I do onstage, because I have her to bounce off of. Plus, as someone who listens to podcasts while traveling, I’d say the familiarity of having the same person's voice in your head every week or two weeks or month or whatever is kind of soothing.

MD: Yeah, I think basically everything feels like a false environment these days, so it's nice when I see or hear genuine things between people. I appreciate the warmth of their realness. I've definitely heard or seen things in the past few years where I'm going, "Ugh, these people have planned out their riffing and it's driving me crazy." I'm sure there are people who are turned off by the fact that we don't adhere to a rigid structure every week and we never really plan out what we're going to say. But planning it would make it way less fun for us. The benefit of knowing the same person since you were 14 is that you have an easy rapport, and we don’t try to restrict that when we do the podcast. 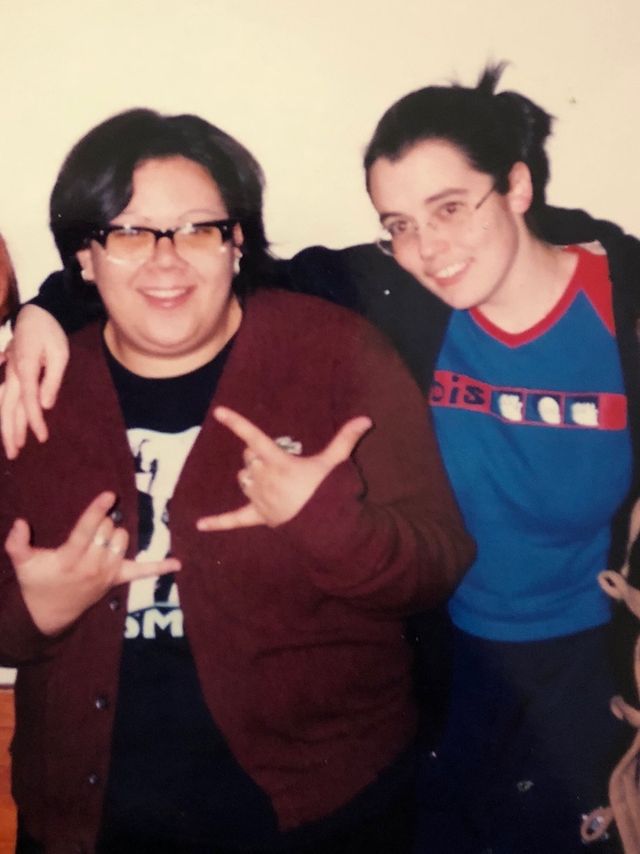 young Millie (L) and April (R)
JL: You seem to know each other inside out. Can you tell us about anything surprising you learned about your best friend while recording?

AR: This is going to sound like I'm kissing her ass, but Millie really is just so much smarter and cultured than I am. I mean, I'm fine, I'm not a total dipshit, but I sometimes forget that I am by far the bigger hayseed of the two of us, and she has much more refined tastes. She is way better read and has watched a lot more good movies (of course).

MD: Aww, but I love your hayseed-ness (if that’s a word)! I've loved hearing about April's childhood and how Southern her roots are on the podcast. I mean, we both grew up there and were in it together as teenagers, of course, but I never really heard her talk about it in this way until we did Sordid Details. I love it when she talks about growing up in Georgia with her Nana and mom and owning country music 45s as a kid. Discovering new things about an old friend is exciting!

Anything else you want your fans to know?

AR: I'm currently on tour, literally just driving around the country in my Honda Civic, doing stand-up; all dates are at aprilrichardson.com. We’re doing a live Sordid Details in Atlanta on July 23, so come out! Also, we made merch because, shockingly, (most) people love our dumb word-shortening habit, so all that stuff is up at sordidmerch.com. We also put up bonus episodes for our Patreon subscribers at Patreon.com/aprilrichardson.

The Podcast "Mueller, She Wrote" Is The Perfect Combination Of Informative And Funny

Jeanée Ledoux is a lifestyle writer and editor who lives in Brooklyn with her photographer husband and the world’s sweetest blind mutt. You can follow her tame adventures, mostly in the world of words, on her Instagram account @finely_crafted.