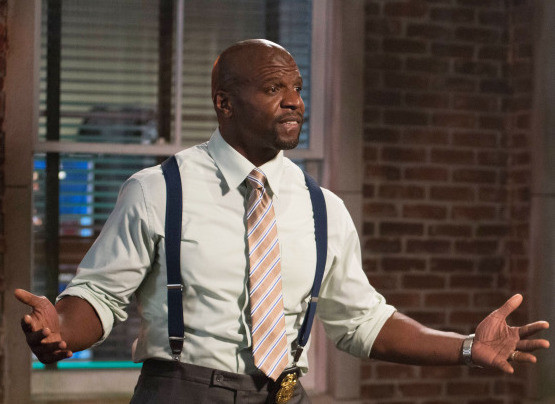 Terry Crews has previously spoken out about having also been affected by the “cult of toxic masculinity” in Hollywood. He joined the #MeToo movement, speaking out about being groped by a Hollywood agent and adding his voice in the call for sexual assault survivors' rights. (You can read more in the BUST interview from our April/May 2018 print issue.)

Yesterday, Crews gave a testimony to the Senate Judiciary Committee at a hearing for the Sexual Assault Survivors’ Bill of Rights. This bill is supposed to provide new rights for victims of sexual violence in the federal criminal code. Yesterday’s hearing was intended to review the implementation of that bill, which was enacted two years ago.

Though he did not name his abuser in his testimony, Crews had previously said it was MWE agent Adam Venit who groped his genitals, multiple times, at a party he attended with his wife. Crews pulled out of The Expendables film franchise after the producer, Avi Lerner, told him to drop his case against Venit. In his testimony, Crews said, “Abusers protect abusers—and this is one thing I had to decide, whether I was going to draw the line on. Am I going to be a part of this or am I gonna take a stand, and there are projects I had to turn down.”

He discussed that even though his assault only lasted a few minutes, it asserted a dangerous power dynamic. He said, “And what happens also is that you get tricked into thinking that this type of behavior is expected, that it’s part of the job, that this harassment, abuse, even rape is part of your job description.

“I was told over and over that this was not abuse. This was just a joke. This was just horseplay,” he said. “But I can say one man’s horseplay is another man’s humiliation. And I chose to tell my story and share my experience to stand in solidarity with millions of other survivors around the world. That I know how hard it is to come forward. I know the shame associated with the assault.”

He also talked about how as a black man if he were to retaliate or become violent in response to the assault, he would not have seen justice or mercy. He previously told BUST, “I’m a 240-pound black man. If I’m defending myself and knock this guy out, there’s not going to be any mercy for me. Just ask all the brothers who’ve been shot down. I would’ve lost everything.”

Both of the committee chairs, Sen. Chuck Grassley and Sen. Dianne Feinstein, shared their support for Crews, thanking him for his "bravery" and "perseverance." Feinstein added, “This should be for both sides of the aisle.” You can watch his full testimony below.

Terry Crews Shares His Sexual Assault Story, Sends A Powerful Message About How Survivors Are Silenced