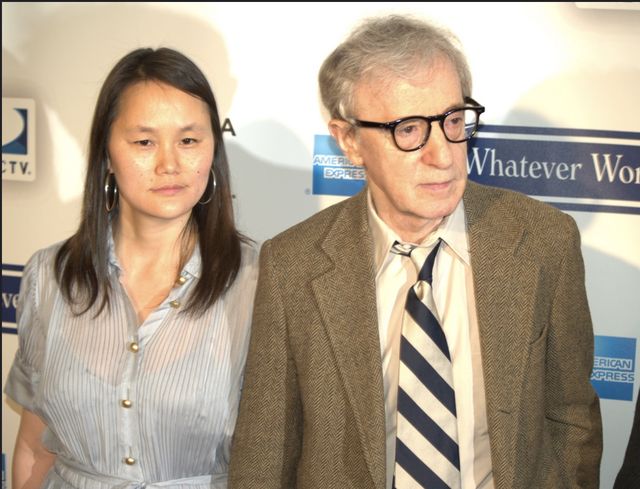 In a Monday interview with Periodismo Para Todos, notorious creep and filmmaker Woody Allen argued that he should be the “poster boy” for the #MeToo movement. “I have worked in movies for 50 years. I’ve worked with hundreds of actresses and not a single one have ever suggested any kind of impropriety at all,” he said. He also added that he’s frustrated to get “linked in” with abusers such as Harvey Weinstein.

Hey, Woody Allen—even if it was true (which it's not—Mariel Hemingway has said that Allen tried to manipulate her into sex when she was 18), it’s not a big achievement to go 50 years without sexual assault accusations from women you’ve worked with. Female directors seem to do it all the time. And don't forget the sexual abuse accusations from Allen's daughter Dylan Farrow, who has repeatedly said that Allen sexually abused her when she was seven years old. Or the fact that Allen's relationship with his wife Soon-Yi Previn began when Previn was 19 or 21 and Allen was dating her mother Mia Farrow, who has said Allen was a father figure to all of her younger children. Read more in The Wrap.

In other #MeToo news, after a woman came forward about getting drugged and raped by Riff Raff at a show in 2013, a second woman has accused the rapper of sexual misconduct. 20-year-old Kelsey Doucette, who was 17 at the time she says Riff Raff sexually assaulted her, said that she met and exchanged numbers with Riff Raff during a meet-and-greet at Warped Tour in 2015. He then invited Doucette to hang out in his tour bus. She went with a group of friends, who were excited to hang out with the artist, but none of her male friends were allowed in. Once in the bus, Doucette says Riff Raff gave her a tour, which included his bedroom, and tried to forcibly pull her onto the bed and kiss her. “I was genuinely scared,” she tells Jezebel. Read the full story at Jezebel.

Miss America Will No Longer Focus on Physical Appearance

Saudi Arabia is the last country to allow women the right to drive. The current law barring female drivers, though, will change on June 24, and ten women celebrated yesterday by getting their Saudi licenses. Saudi activists fighting against sexist laws, though, are still being imprisoned, as are women who have defied the rule and driven within the kingdom. Read the story on the BBC.

Why Do Doctors Dismiss Women’s Pain?

In the first story in BBC’s new Health Gap series, Maya Dusenbery, author of the recent book Doing Harm: The Truth About How Bad Medicine and Lazy Science Leave Women Dismissed, Misdiagnosed, and Sick, reported that 40,000 to 80,000 deaths just within the United States could have been prevented if not for late diagnoses at the hands of doctors who write off women’s pain. Check out the full piece at the BBC.

The Last Jedi star Kelly Marie Tran, the first woman of color to play a major role in the Star Wars franchise, deleted all of her Instagram posts following excessive racist and sexist comments from Star Wars fans who didn’t like her character. Vox reported that as soon as her Instagram posts were erased, some of these individuals started celebrating on Twitter, calling it a victory. Read more on Vox.

Legally Blonde 3 Is Going To Happen

Following 2003’s Legally Blonde 2: Red, White & Blonde, screenwriters Kirsten Smith and Karen McCullah are bringing back Legally Blonde’s original cast for a third film. The movie will be produced by Marc Platt and Platt Productions president Adam Siegel, but the duo will also be joined this time by Reese Witherspoon, who stars in the films as Elle Woods. Learn more on Deadline.

Steve McQueen’s upoming film Widows, centering around four widowed women who take on a mission to finish the heist their husbands died trying to pull off, officially has a trailer—and we’re already in love with this cast (featuring Michelle Rodriguez, Liam Neeson, and Daniel Kaluuya!), especially star Viola Davis, who plays Veronica. Learn more in Harper’s Bazaar, and check out the trailer below.