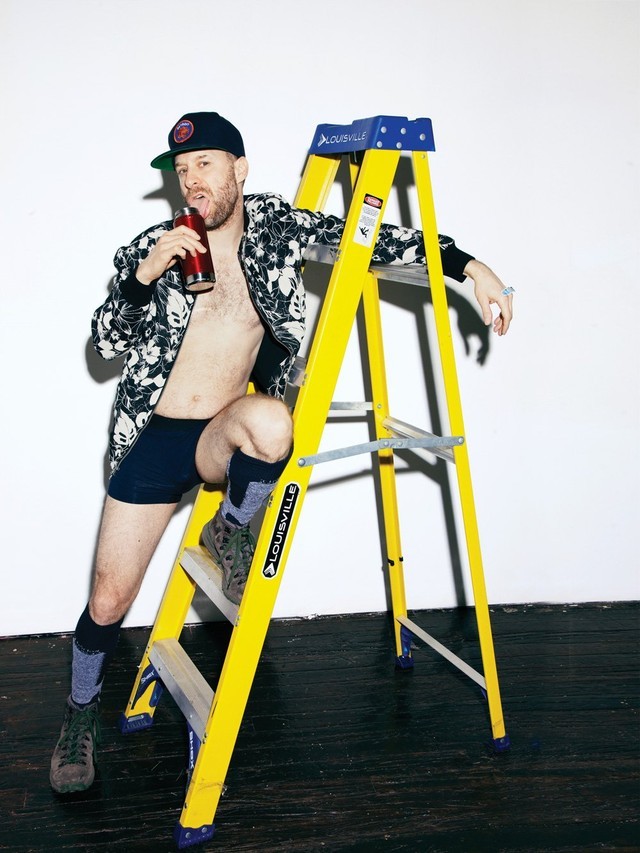 Jon Glaser is wearing a floral bomber jacket and very little else. Striking a pose on a ladder, he could teach Derek Zoolander a thing or two about male modeling. But once our photo shoot is over, the 48-year-old bundles up in a plaid jacket and shares tips about the best brand of insoles before settling down in a small Greenpoint, Brooklyn, cafe to chat over tea—he's trying to cut down on coffee.

If you don't recognize Glaser's name, you definitely know his face. He's Jeremy Jamm, Leslie Knope's nemesis on Parks & Rec; Laird, the recovered-junkie-turned-dad on Girls; and the scantily clad waiter in the famous Inside Amy Schumer sketch, "Lunch at O'Nutters." You also know him from Sisters, Baby Mama, and Trainwreck, and his own shows, too: Jon Glaser Loves Gear, Delocated, and Neon Joe Werewolf Hunter, back for a second season on Adult Swim later this year. 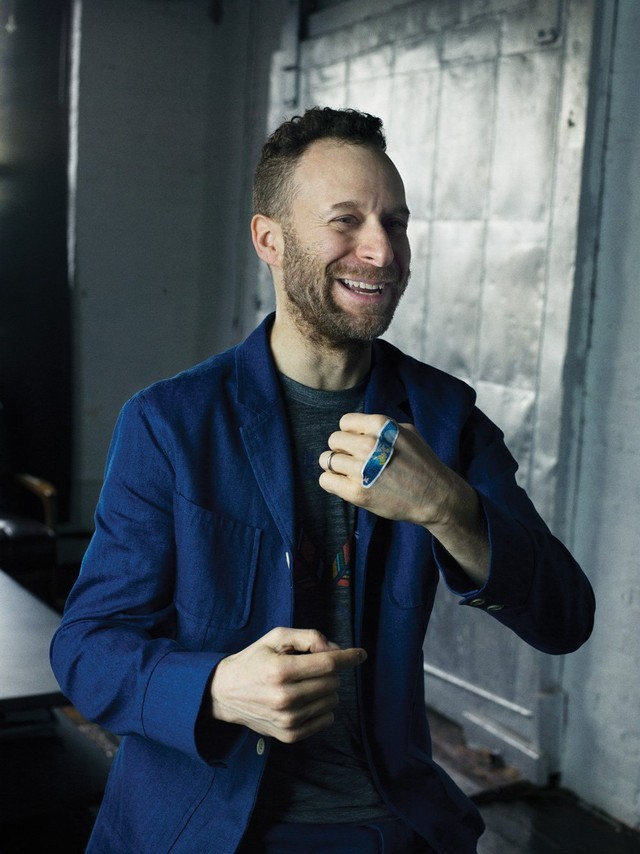 Glaser insists that his frequent appearances supporting funny female superstars is simply "a byproduct of chance" born out of a 20-year career that started at Second City in Chicago. When he joined the cast of Parks & Rec, he already knew almost everybody. And his work with Schumer started when he cast her in Delocated in 2012. "I didn't know who she was, I didn't know her standup—she was just hilarious," he says. "And then all of a sudden, she's doing her own show, and she was nice enough to put me in stuff."

When we meet, it's only seven days after the inauguration and six days after the Women's March—which he joined in New York—and Glaser has a message for people who think we're about to enter an era of amazing comedy. "Fuck that," he says. "Who gives a shit? These are people's lives." But he also recalls what it was like to go back to work on Late Night With Conan O'Brien—where he was a writer—after 9/11. It's a story Glaser can't recount without getting choked up. A friend of the show, a retired-firefighter-turned-actor, stopped by 30 Rock after a funeral, gathered the whole staff, and thanked them for providing laughter in the midst of horror. "They go back to the firehouse and they turn on our show just for a break, just to not think about it," he says. "And I know that made me feel better about it. This stupidity serves a purpose for people."

Rep. Maxine Waters: 'I'm A Strong Black Woman And I Cannot Be Intimidated'

Bridgett Everett: 'You May Not Know Me, But You Sure As F*Ck Won't Forget Me' BUST Interview

The Outrage Against Childfree Women Is Real — And Needs To Stop

Tags: Jon Glaser , Boy Du Jour , Comedy
Support Feminist Media!
During these troubling political times, independent feminist media is more vital than ever. If our bold, uncensored reporting on women’s issues is important to you, please consider making a donation of $5, $25, $50, or whatever you can afford, to protect and sustain BUST.com.
Thanks so much—we can’t spell BUST without U.