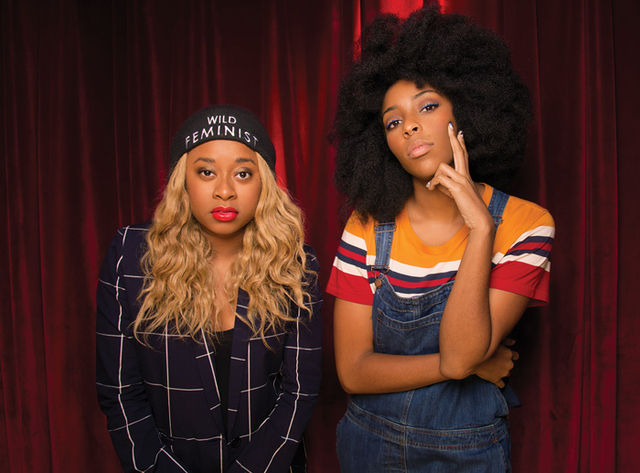 Jessica Williams and Phoebe Robinson’s podcast 2 Dope Queens will absolutely make you snort coffee out of your nose on your morning commute. The comedians and BFFs banter about everything from shopping at Zara (“Zar Zar Binks”) to dudes with guitars (“An acoustic dude’s catalog is 90% Sublime”) to HGTV’s Tiny House Hunters (“It’s a white person space. And what do you do in a white person space? You practice ukulele”). And that’s just in the first 15 minutes of one episode.

Williams, 28, and Robinson, 33, have been friends for four years—they met in 2014 when Robinson was a background actor for a Daily Show segment Williams did on black women’s hair in the military. They started collaborating on their own projects soon after, and made their “work wife” relationship official when 2 Dope Queens launched as a podcast in early 2016. On the podcast, which is recorded live, the two friends showcase standup comedians (particularly people of color, women, and/or members of the LGBTQ community) and interview celebrity guests. And now, 2 Dope Queens will reach a whole new audience thanks to four, hour-long HBO specials airing every week in February. The show will feature the comedy stylings of Rhea Butcher, Aparna Nancherla, Michelle Buteau, John Early, and more, plus celebrity guests including Sarah Jessica Parker, Uzo Aduba, Tituss Burgess, and Jon Stewart. And if that isn’t enough to get you excited, Tig Notaro directs. But despite all the star power, the focus remains where it should be—on Williams and Robinson’s hilarious hosting.

Timing is such that due to each dope queen’s individual skyrocketing career, I can’t get the two of them on the phone at the same time. It’s understandable—in the past year, Williams had her first starring role in a movie (The Incredible Jessica James) and Robinson released both a book (You Can’t Touch My Hair) and a solo podcast (Sooo Many White Guys). I catch Robinson on the phone two days after she finishes her “Yas Queen Yas” comedy tour with Broad City’s Ilana Glazer. She’s spending some time with her new boyfriend (whose name she won’t share, but who she calls #BritishBaekoff on social media) before buckling down to finish her second book. Later that week, I talk to Williams as she drives to her parents’ house in L.A., where she’ll spend one full day before flying to the U.K. to film her role in the Harry Potter prequel, Fantastic Beasts: The Crimes of Grindelwald.

The podcast has come so far since you first started. What’s it like to look back at how it’s grown?

PR: It feels wild and very exciting. I think this is the first comedy podcast to translate to TV. At first, we never really had any grand plans for 2 Dope Queens. But once we saw how people were responding to it, I’m very business-minded, so I was like, “We have to try and get on HBO.” And it just so happened that we were like, “Will you marry me?” And HBO was like, “Yes.”

JW: I think getting an HBO special is a best-case scenario for something that you start doing not because you want to make money, but because you have an idea that you love. We really wanted to give people of color an opportunity. If you’re a minority, oftentimes you are a supporting character in somebody else’s narrative. But with 2 Dope Queens, not only do we get to be the stars of a narrative, but we also get to give other people the opportunity to be the stars of their own stories, too.

How are the specials going to be different from the podcast?

PR: It’s the best parts of the podcast, amplified. We realized the backbone of the show is my chemistry with Jessica. Obviously, we elevated it with a nice set and a cool wardrobe.

How do you separate your work relationship and your friendship?

PR: We don’t really have any rules, but we do make sure we go to a concert together or go out to dinner together and have it be a friend hang, and not be like, “We have to do this and this and this.”

JW: Sometimes we’ll have an experience in our personal lives, and we’ll be like, “Wait, wait, wait, save it for the show!” That’s the driving force of the show—we don’t plan any of the conversations. We just try to keep things spontaneous and hot.

Both of your individual careers have been growing. Have you had to change anything about how you live your lives?

PR: I do get stopped on the street sometimes, and that’s cool. Sometimes when you’re in the gym at Equinox and you’re changing and someone’s like, “Phoebe?” you’re like, “Uh-oh, I’m naked, and I don’t know you, but you know me.”

JW: I try to carve out space for me. I make sure I go to therapy and go to the movies by myself. I love when women are like, “I feel like you’re one of my friends from home. I feel like I know you.” I love when I run into black women and they’re like, “Can I just hug you?” I’m always like, “Thank you, yes please.”

"If you're not a straight white guy, know that your opinions are valid, even if you look around and you don't see many people who look like you doing comedy."

Phoebe, you were single when the show took off. Did fame change dating for you?

PR: No. I was single for two years because I came out of a long-term relationship and my career was going crazy. It was never like, “Oh, you have a podcast, I’m going to try to date you.” Guys aren’t like, “You have a lot of career success? I wanna fuck.” Men aren’t conditioned to be attracted to women who are phenomenal bosses. I was just like, “I’m going to work, and if I meet someone, cool, and if I don’t, I’m going to just keep working and going to U2 concerts.” That’s pretty much been it. And then my boyfriend and I met at a U2 concert. LOL. LOL forever.

When the podcast first launched, you both talked a lot about how mainstream comedy shows feature almost all straight white dudes and just one person of color or one woman. Are things getting better?

PR: Now you can create your own stuff, like Issa Rae, and build your own audience. And then you attract production companies and networks. And even if you do a podcast and only a thousand people ever listen to it, you have the platform to get better. Before, you were just hoping that you would get picked, and hoping that you were ready when your number was called.

JW: A couple years ago, people were always like, “Are women funny?” And women were like, “Yeah dudes, duh.” And now we don’t really get that question anymore. I think there is a much bigger conversation going on about inclusivity in comedy. And that we have four—not one but four—HBO specials is evidence that there is plenty of room for different types of comedians and different types of comedy.

What can people do to encourage inclusivity in comedy?

PR: You need to not be lazy. People [with power in comedy] hide behind not wanting to do the work of representing different people, or being like, “Oh, I don’t want it to feel like a charity thing.” You have to reflect on why you think having a person of color who is hilarious on your show is charity. If you see a white male comic and you think, “That’s the standard!” and you look at a black female comic like me and go, “This is the pity person!” you have to look at why that is.

JW: Speak up about comedy you like and try to find new things. Stay woke, and your interests will be woke. Support female comedians, support LGBTQ comedians, support people who are different from you. Go to shows, tell that comic you love their work, tweet about them, go see their movies.

What advice would you give to a woman, a person of color, or an LGBTQ person just starting out in comedy?

PR: Be open to exploring—podcasting wasn’t much of a thing when I started. And self-confidence is key. For a really long time, I was not super confident about standup, because it’s really cliquey and there are all these white dudes and I didn’t fit in. Also, you have to create content from your own point of view. We don’t need a million Seinfelds. Seinfeld has it fucking covered, and he’s going to do a better Seinfeld than you ever can. But if you’re like, Diego, you’re the only Diego. You can be your most Diego self and kill it.

JW: If you’re not a straight white guy, know that your opinions are valid, even if you look around and you don’t see many people who look like you doing comedy. Also, surround yourself with people who make you laugh and who are going to stay woke with you, but who will also get petty and ignorant with you when you need them to.

If you were going to add a third dope queen as a host, who would you want?

PR: Obviously, you’ve got to have Oprah. If she could just post every day on Instagram, like a picture of herself holding produce, that would truly make the world better. We just need to see her holding red cabbage to realize things are not a total dumpster fire.

JW: I also know that Gayle loves our podcast, so I’d love to have her and Oprah on together, like a fabulous foursome.

Jessica Williams On Beyoncé, Feminism, And Dealing With The Haters: BUST Interview