Amy Poehler and Phyllis Diller: A Match Made In Comedy Heaven

Details
BY BUST Magazine
IN Entertainment
Published: 18 May 2017 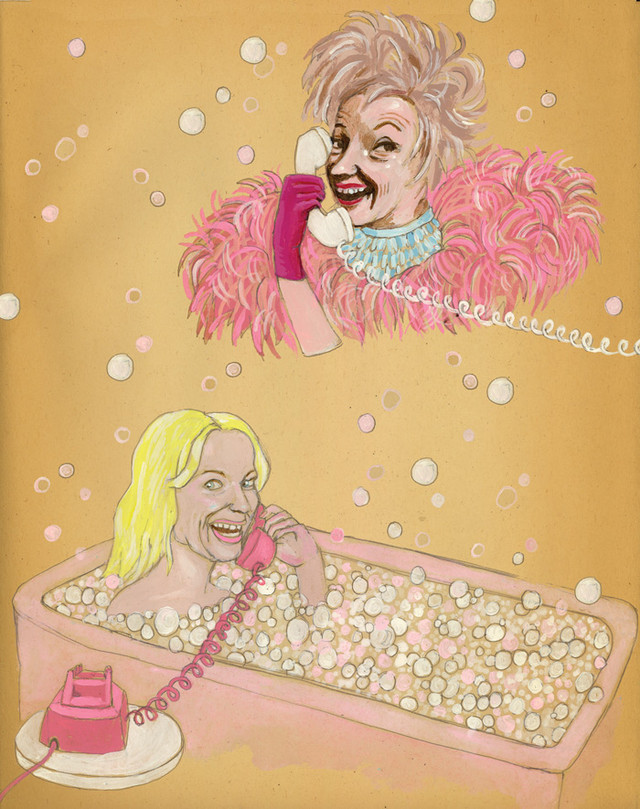 Here at BUST HQ, we’ve been talking about the late great comedian Phyllis Diller because we’re working on a story for our next issue about the Smithsonian’s quest to digitally transcribe all 52,000 of her meticulously catalogued jokes.

Truly, she was a pioneer of the female punch line. And nobody appreciated her more than superfan Amy Poehler. When we asked Poehler back in 2007 to interview Diller on the occasion of her 90th birthday, she jumped at the chance, and the results are a bright spot in the history of BUST.

Enjoy this Flashback Friday reprint of this sweet convo between two undisputed queens of comedy from the Dec/Jan ’08 issue. Then think of a woman who inspires you, and let her know how you feel!

By Amy Poehler and Emily McCombs
illustration by Martha Rich

Who wouldn’t wanna be a fly on the wall when SNL’s Amy Poehler gives comedy legend Phyllis Diller a call?

In SAT-analogy parlance, Phyllis Diller is to female comedians as Janice Dickinson is to supermodels (i.e., approximately the first). Diller, however, is the antisupermodel. A celebrated standup who has been ridiculing her own appearance in public for five decades, she quipped in her 2005 autobiography, “I pity any pretty woman starting out in standup comedy.” Diller herself started out at age 37 in 1955, with a nightclub act lampooning domestic life; her frumpy housewife character sold out shows in San Francisco for 89 straight weeks. By the time she played Carnegie Hall five years later, she had perfected jokes mined from the miserable reality of her home life, which included a first husband who forced sex on her and faked heart attacks and a second who cheated on her with men. Diller, dressed in eccentric gowns and with her trademark fright-wig hair and cackle, was the hostile voice of the American housewife, paving the way for future domestic goddesses like Roseanne Barr and Brett Butler.

Character-driven comedians like Amy Poehler also owe a debt to Diller’s housewife persona. Poehler, in her seventh season as a cast member on Saturday Night Live and preparing for the release of her film Spring Breakdown, jumped at the chance to interview one of her heroes on the occasion of her 90th birthday. Not surprisingly, the two funny ladies found plenty of common ground, as they nerded out over comic history and their mutual adoration of Miss Piggy. emily mccombs]

Phyllis! You just celebrated your 90th birthday! How does it feel to be 90?

I haven’t really had a chance to find out.

I feel so privileged to speak with you. I have been a fan my whole life, and in fact, you were on my two favorite shows growing up — The Muppet Show and The Gong Show. You got any good stories about those shows?

[The Gong Show] was fun, and I became friendly with the creator, Chuck Barris. He turned out to be such a fun little guy. And I just loved doing The Muppet Show. There was Miss Piggy, my God!

Oh, she’s the greatest. She was the first puppet feminist.

I guess she was. And God, did she have an ego!

What advice would you give to young women finding their way?

You gotta have a plan and a goal—but that can change day to day. As you go along, you should learn and not be afraid of change.

Right. In addition to standup, you’ve done everything from music to painting to acting to singing. Anything you haven’t done yet?

No, I’ve really covered what I’m capable of. Though you know, I never did dance on pointe.

You started in show business relatively late. What gave you the courage to do that for the first time?

Well, I married a man who simply couldn’t make a living. So after we’d gone through all my money, I had to go to work. My husband had agoraphobia. But I have to give him credit: he’s the one who insisted that I become a comic.

When you started in comedy, who were some of the people who helped you out?

Oh, the people who owned the Purple Onion [club in San Francisco]. One of the owners was a real Barrymore, and he knew how to nurture talent.

Tell people what the Purple Onion was about.

Back then, there was no such thing as an open mic. But every Saturday, they had an open audition, and anyone, any color, any age, could audition and try for a job at the Purple Onion.

And you performed there all the time.

There were also discovery clubs [where talent got “discovered”] in New York, like the Blue Angel and the Bon Soir. That’s where Barbra ?Streisand started.

Did you ever go see her early shows?

She opened for me! I got to know her when she was 18 years old. And in the audience, you’d have Tallulah [Bankhead], Marlene Dietrich—I mean, it was just something else.

Being a standup and a woman during that time, did a lot of guys underestimate you?

I don’t know whether they did or not. I didn’t care.

So you never had to deal with any sexism?

No. Look, if you’re funny, they need you.

You’re right. A lot of people don’t know that you hold the world record for the most punch lines delivered in one minute—12!

Well, I’m out of touch. When you’re 90, you go out, but you don’t go out to those kinds of clubs. Besides, it’s pretty impossible for me, because it upsets everybody.

Why? Do they get nervous because you’re there?

Yeah, and besides, they might think I’m judging them or something.

Some people have certain rituals that they do before they go on stage. Do you?

I must have five minutes of silence.

And what do you do during those moments?

I get my head screwed on real tight and think about the opening line. They’re very important, those opening lines. And they’re the last thing I learned how to do well. I mean, it took me years.

I have such respect for standup, because you’re continually working on your act. For years you’re crafting it, figuring out what works.

Yeah, that’s what keeps it interesting. There’s no ceiling. It can always be funnier.

I’m looking at your television guest appearances, which is an amazing list—everything from Carol Burnett to Dick Cavett.

I was the eternal guest. They’d sometimes use me in an acting skit or in a production number or something. I remember on one of Carol Burnett’s shows, I played John Lennon!

When I’m on Saturday Night Live, every once in a while I get to play guys. One time I got to play Michael Jackson, ’cause as a white girl, I looked the most like him. 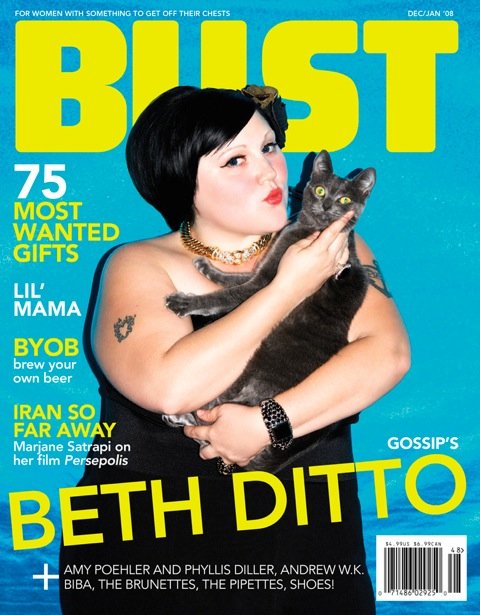 This story was originally published in BUST Magazine, Dec/Jan 2008.

Want more of this kind of awesome pop culture coverage delivered right to your door? Subscribe to BUST!

Susan Sarandon #Slays In This Interview From BUST's Archive

Hey Get Down! Women Got Down Too

30 Years Of Abortion, From 'Dirty Dancing' To 'Obvious Child'