Carol Channing: "How Could I Possibly Have Regrets?" BUST Interview 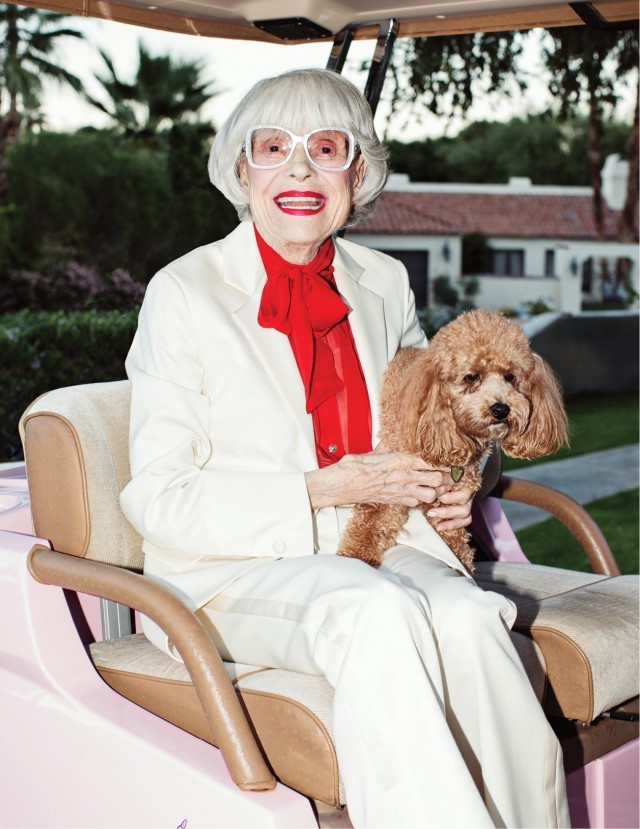 If anybody was born to be a star, it’s Carol Channing. The 95-year-old, sandpaper-voiced, musical-theater superstar is “razzle dazzle” personified. A snazzy throwback to Old Hollywood, Channing is a first-class dame in the true sense of the word, and a no-holds-barred performer who’s more fun than a Ferris wheel, and fizzier than a soda machine. Channing’s been acting and singing professionally for—count ’em—75 years. She first hit the big-time in 1964, when she originated the title role in Hello Dollyon Broadway, for which she won a Tony. Since then she’s been nominated for an Oscar (for 1967’s Thoroughly Modern Millie, played the top-hatted White Queen in 1985’s cult TV classic Alice in Wonderland, and earned a Lifetime Achievement Tony in 1995. And, like any camp icon worth her false eyelashes, she’s also been impersonated by the queens on RuPaul’s Drag Race. (They nailed her catchphrase, “Raaaaaaspberries!”) Brassy, beautiful, and bombastic, Carol Channing is aging like high-quality champagne. Here, we ask about her idea of the perfect day, her biggest fear, and her advice for ladies who want to grow up to be just like her. Which, essentially, is all of us.

What was the first job you ever got a paycheck for?

In 1932, I won first prize during a competition for performers at the War Memorial Opera House in San Francisco. There was a cash prize, but the best part wasn’t the money—it was that I also won a trip to Honolulu and took my mother. Boy, did we have a good time.

Who are some of your favorite stars working today?

I’m embarrassed to say I don’t really know any of the new people today, but I love Lily Tomlin, Catherine Zeta-Jones, and Kristin Chenoweth. Oh, and I met a young lady named Anne Hathaway at the SONY Studios. She had just worked with my friend, the brilliantly talented Julie Andrews. I’m sorry to say that I haven’t seen her work yet, but she impressed me as an individual.

Why do you think you’ve had such a long and successful career?

I’ve been very lucky. Blessed, really. I found an audience...or they found me. Anyway, they’re the ones that matter the most; if they love you, they’re faithful for life, and you can feel that love from them. It’s very healing, especially their laughter. Applause is obligatory, but laughter is a true reward from an audience.

You recently turned 95: How did that birthday feel?

I was raised in a Christian Science family, so birthdays and age were never very important. I still don’t know why everyone applauds when they announce my age. I mean, it just happens.

You’ve paved the way for so many female performers. Do you consider yourself a feminist?

I guess it depends on your personal definition of the word. I was told that I was a feminist when I spoke out to help others. So if you subscribe to that interpretation, then yes, I suppose I am.

In 2012, you were the subject of a documentary by Dori Berinstein called Carol Channing: Larger Than Life. Was it difficult for you to allow documentarians into your world?

Oh, poor Dori, she was so patient with me. I’d delay things or have to cancel for one reason or another. I don’t know how she put up with me. I really didn’t think anyone would care about watching my story. But she was passionate enough for the both of us, and she proved me wrong.

What’s your idea of a perfect day?

Well, first of all, waking up. That’s a nice sign that the day is headed in the right direction. After that, it’s all pretty good. I always enjoy getting together with friends at the Thunderbird Club [in Rancho Mirage, CA] for brunch, and then anything can happen.

How do you feel about the upcoming election?

All I can say is that I miss the Kennedys, the Johnsons, and the Fords.

There are so many more opportunities for young women today than there used to be. But still, my advice has remained the same forever. Dedicate yourself to pursuing and understanding every aspect of your work, and concentrate on the things that bring you great joy.

Do you have any career regrets?

No. I did 10 shows on Broadway and sure, not all of them were hits. But I wouldn’t change a thing. I got to work with George Burns and Mary Tyler Moore. I received a Golden Globe and an Oscar nomination, and so much more. How could I possibly have regrets?

You always seem like you’re having more fun than anybody on Earth. Is that true?

I do? Well, that’s nice to know, and how kind of you to notice.

‘Jessica Jones’ Will Have All Women Directors For Its Second Season, Proves It’s Marvel-Ous

Hamilton's Daveed Diggs Is Reliable With The Ladies: BUST Interview