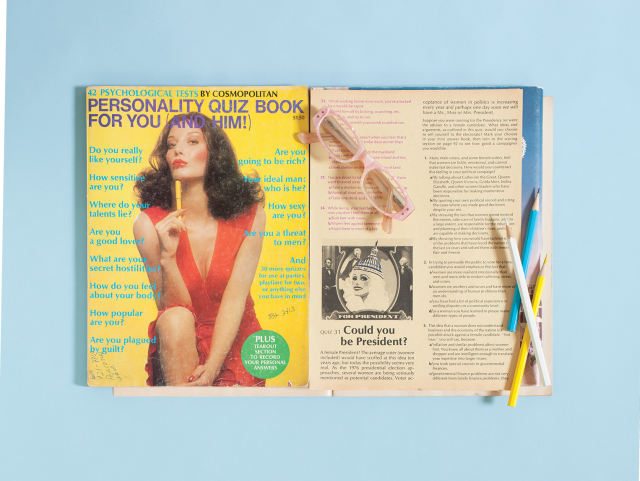 If I Was President

Collective memory holds that Cosmo quizes are usually devoted to sex. But Cosmopolitan’s Personality Quiz Book (1974) had some depth lurking beneath its glossy cover. Sure, there were gems like “Are You A Good Lover?” and “How Sensual Are You?” But then there was: “Could you be President?”

“A female President?” began the introduction. “The average voter (women included) would have scoffed at this idea 10 years ago, but today the possibility seems very real.” Indeed, voters then had been scoffing at women candidates for about a century, ever since Victoria Woodhull ran for president in 1872. Given that Woodhull was under the legal age of 35, however, some historians consider attorney Belva Lockwood, who ran in 1884 and 1888, the first woman to run for the presidency. And closer to the time Cosmopolitan ran its quiz, New York Congressperson Shirley Chisholm made a presidential bid in 1972.

Forty years later, we haven’t yet elected what the quiz called a “Ms., Miss, or Mrs. President.” And the quiz’s eight questions reflect fears and stereotypes that still nag today’s female candidates. “Many male voters, and some female voters, feel that women are fickle, emotional, and cannot make fast decisions,” reads one. “The idea that a woman does not understand business and the economy of the nation is a possible attack against a female candidate,” reads another. Regarding “Women’s Lib,” should a potential candidate be herself without being “tough” or be “an aggressive feminist” and campaign for women’s rights? Should she charm voters with her “feminine wiles and sexiness”? The quiz’s answers were weighted from one to four points each; the “sexiness” answer was worth two points, whereas being an aggressive feminist gained only one.

What about appearance? Should a “good-looking” candidate point out that “as an attractive woman” she would “have a special advantage in dealing with (male) heads of state, politicians, etc.” or dress well “but inconspicuously so as not to arouse the envy of women voters”? This question, perhaps more than the others, continues to be relevant today. Twenty-first century women candidates are still striving to “look approachable and, at the same time” like they can “handle the job,” according to an image consultant who spoke to The New York Times in 2010. Another said that the women she worked with were “going for femininity,” because female candidates “had been in a mimicking-men phase for so long.” This was perhaps a dig at Hillary Clinton’s famous pantsuits.

Personally, I scored 25 out of a potential 32 points when I took the quiz, which means I have “an excellent chance to gain the White House!” This, according to the answer key, was because I was honest and straightforward without making a major item of my femininity, or “attacking” or “antagonizing” men. You can call me Ms. President.

Ani DiFranco On Her Upcoming Festival And Why You Should Vote: BUST Interview

Tags: cosmo , if I was president
Support Feminist Media!
During these troubling political times, independent feminist media is more vital than ever. If our bold, uncensored reporting on women’s issues is important to you, please consider making a donation of $5, $25, $50, or whatever you can afford, to protect and sustain BUST.com.
Thanks so much—we can’t spell BUST without U.