This Is What It's Like To Work At A Sloth Institute 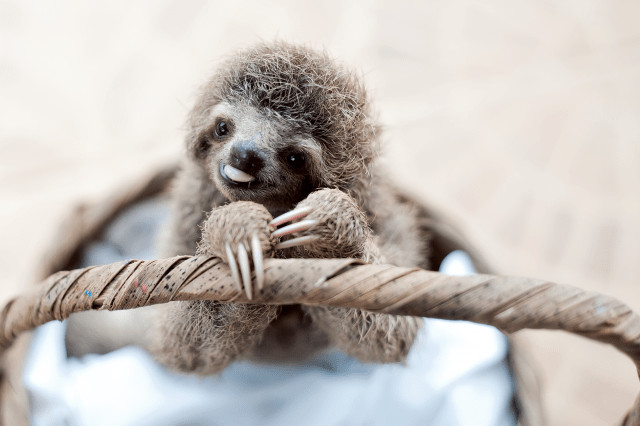 Life In the Slow Lane

What’s it like to leave the modern world behind to work with sloths in the jungle? Just ask kickass conservationist Sam Trull 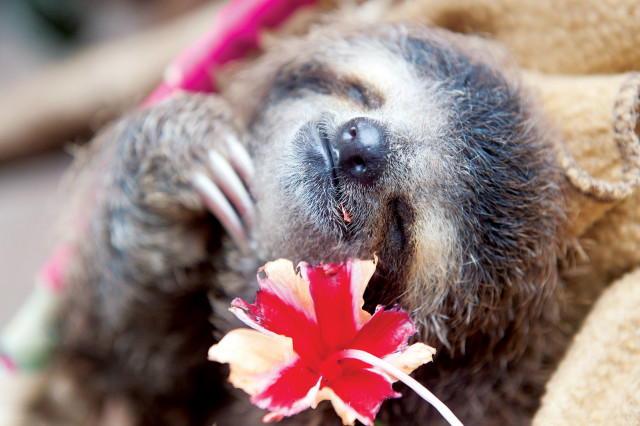 Monster chillin’ with a snack

Sam Trull found out the hard way that you don’t want to get nibbled on by a sloth. “I’ve been bitten by a two-toed on my left ring finger, actually. Of course,” she says with feigned exasperation. “My nail will never be the same.” Between their insanely sharp teeth, long claws, and jaws that can literally chew through rocks, sloths are a lot gnarlier than your favorite memes would suggest. As if to add insult to injury, “they also have a very dirty mouth,” says Trull, the co-founder and wildlife director of the Sloth Institute in Manuel Antonio, Costa Rica. “Pretty much everybody I know who has been bitten by a two-toed has needed to take systemic antibiotics because their bite gets infected really quickly.” It’s a good thing the creatures are typically sweet and so damn cute, as are all the photos Trull took for her new book, Slothlove. 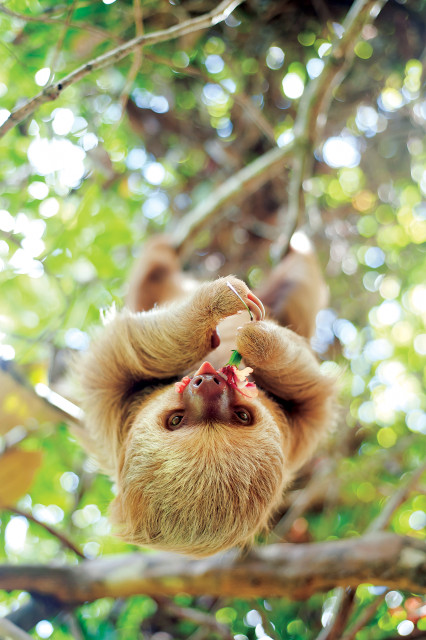 Ellen munching on a flower 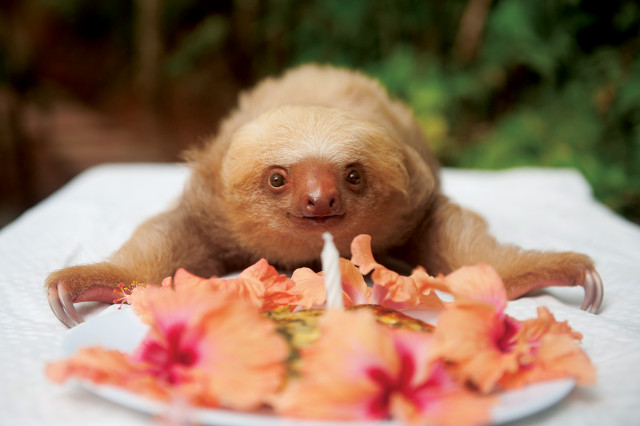 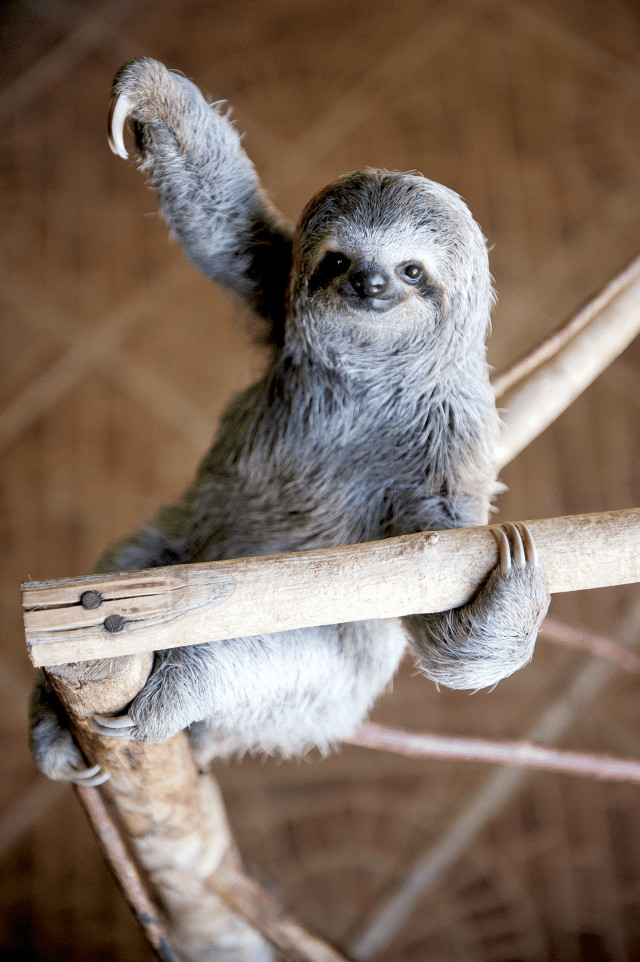 Believe it or not, this is a defensive posture for a sloth

The 35-year-old started working with animals as a teen volunteering at the Duke Lemur Center in North Carolina where she grew up. After snagging an undergrad degree in zoology in 2003 and a Masters degree in primate conservation in 2006, Trull planned on working with monkeys. But then in 2007, her fiancé died in a car accident, and just six months later she lost her father to cancer. She had been in Madagascar, studying the aye-aye, a type of lemur, when she got the call that her dad was dying. “I was like, really?” she says with a small, sad chuckle. “Whenever you go through something huge, whether it’s traumatic or really amazing, it definitely opens up your perspective to what’s actually important to you.” For her, working with animals had always been her intention; these huge losses only clarified that. But she was no longer sure exactly how she hoped to have an impact. 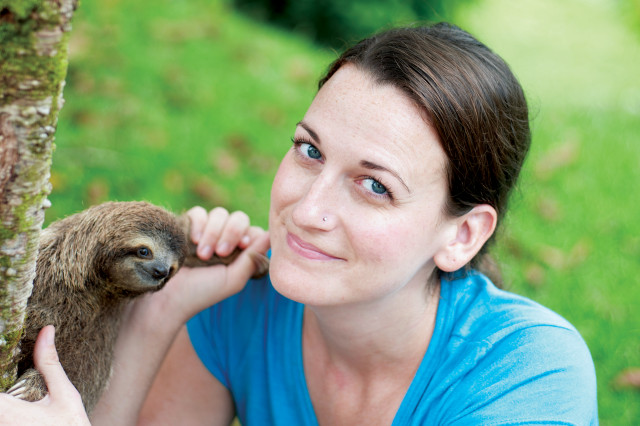 “Any woman doing field work of any kind, no matter what species, adores Jane Goodall. She’s basically perfect. I always thought, Oh man, I want to be like her,” Trull says. “I’ve always been passionate, I’ve always gone after my dreams, but this kind of lifestyle and this kind of work is really difficult. Not only just to get into, but also to survive and to find your niche for really making a difference.” Trull made two more trips to Madagascar and one to West Africa before she found her true calling at a non-profit called Kids Saving the Rainforest in Costa Rica. Although plenty of different animals came into the organization’s on-site rehab and rescue clinic, Trull had a special knack for raising baby sloths—sometimes newborns that required around-the-clock care—to adulthood. The creatures don’t exactly thrive in captivity, especially newborns, so it required a considerable investment of time and energy, not to mention the ensuing emotional attachment. Plus, her sloths weren’t ready to be released into the wild all willy-nilly, a challenge that led to her current venture. “[The Sloth Institute] started as a way to make sure my babies were released into the forest as well as possible. But now it has turned into an entire sloth conservation project,” Trull says, in her slight Southern accent. “I think I’m probably more excited about that than even raising the babies. [That’s] amazing and very fulfilling, but the projects we’re pioneering now will help sloth populations potentially anywhere.” 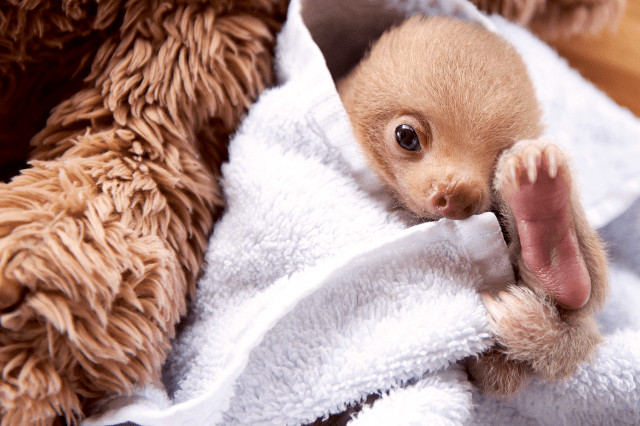 Although there are other sloth rescue and rehab centers, no one is doing on-the-ground research on released and wild sloths like Trull and her team. “With sloths, or with other species that aren’t technically considered endangered, a lot of times it’s like, ‘Oh, well, they’ll be fine.’ But the truth is, they’re not fine. Their population is in trouble,” she says. “Just because they’re there, doesn’t mean that they’re going to stay there and it doesn’t mean that they’re doing well.” Working with sloths isn’t all cuddles and kisses, however; it can be emotionally wrenching work. Trull and her colleagues at the Sloth Institute have to deal with the more difficult details of animal rescue every day, from taking in newly orphaned babies to treating sloths that have been electrocuted or attacked, some of which don’t survive. “I unfortunately watched my father die, so watching sloths die reminds me of it, but it also helps me get through it,” she says. “It still devastates me, but I can handle it enough to focus on helping them.” 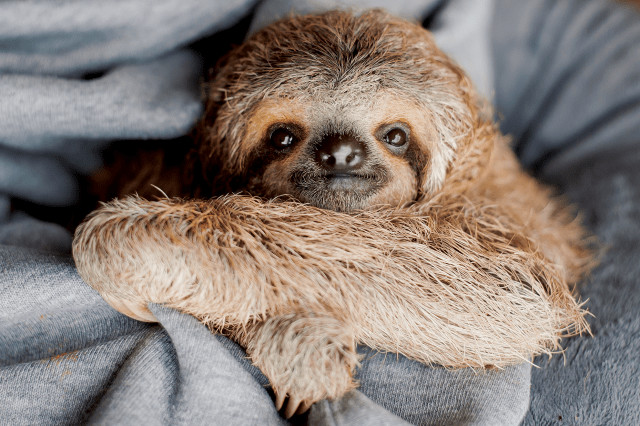 The upsurge in sloth popularity is not without its dangers as well. Costa Rica thrives on tourism, but Trull encourages sloth-seeking visitors to be responsible and look but not touch. The Institute’s website makes it clear that it’s not a sanctuary, and visitors shouldn’t expect to see sloths; even volunteers might spend several weeks there with nary a sloth sighting. While tourists can visit sloth sanctuaries, supporting non-sanctioned sloth experiences—like taking a snuggly roadside selfie with a two- or three-toed creature in captivity—can end in tragedy if the animal’s caretakers aren’t prepared to look after that sloth for the long haul. And then there’s the pet trade. Sure, it seems like it would be non-stop fun—or non-stop sleepy snuggles—to have your own sloth, but it is a really bad idea to keep a sloth as a pet. “The U.S. is by far the number-one spot where wildlife from other countries come to be pets,” Trull says. “Ninety-nine percent of people are not going to be able to properly care for them, and then even if you can properly care for them, you still aren’t as good as their natural habitat.”

Of course, if anyone understands the incorrigible appeal of these animals, it’s—as her friends have dubbed Trull—the Mother of Sloths herself. (Trull loves Game of Thrones, and one Halloween she even dressed up as Khaleesi—but with stuffed sloths instead of baby dragons.) Slothlove focuses on some particularly unforgettable sloths Trull has met over the years, from fuzzy-faced Chuck (named after her late father) to Kermie, who was the first newborn Trull cared for. There are also plenty of scientific details included, and an incredible tale of what’s surely the world’s first sloth Caesarean section. But what will make sloth fans really go wild are the wonderful portraits Trull takes of these sweet-faced animals, who look into the camera guilelessly; they are, after all, staring right at their number-one advocate. “They’re just these nice creatures,” she says. “They don’t want to hurt anybody. They just want to be in the trees, mind their own business, eat some leaves, and scratch their butts in the sunshine, you know?” 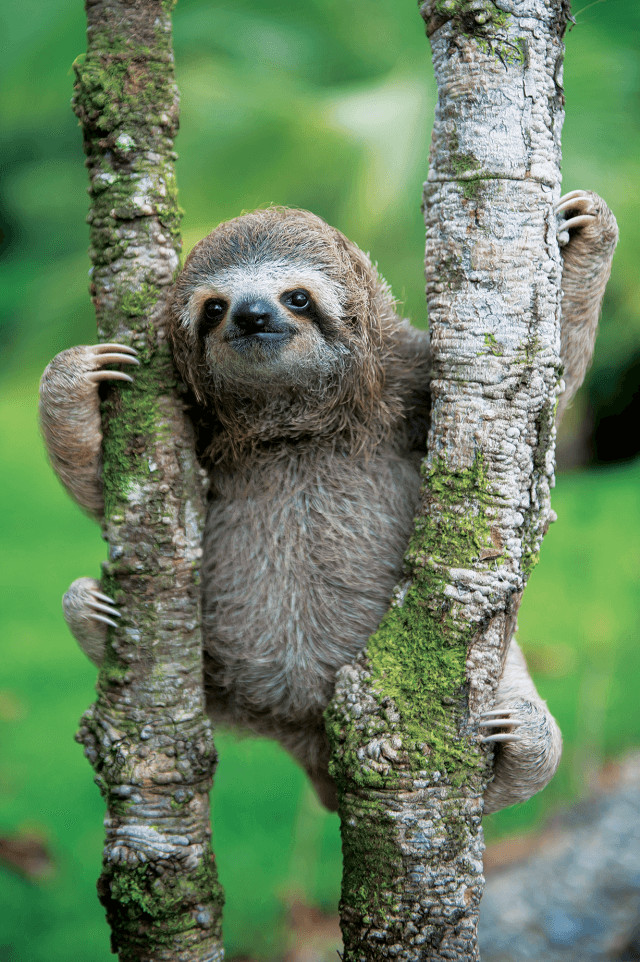 Newbie in the trees

The Sloths Are Coming...And We Couldn't Be Happier

Tags: Sloth , baby sloths , Monster , Newbie , Kermie , Ellen , Sam Trull , sloth love
Support Feminist Media!
During these troubling political times, independent feminist media is more vital than ever. If our bold, uncensored reporting on women’s issues is important to you, please consider making a donation of $5, $25, $50, or whatever you can afford, to protect and sustain BUST.com.
Thanks so much—we can’t spell BUST without U.