"We Need To Talk About Kevin" Director Lynne Ramsay Tells Stories Of Grief And Guilt: 52 Weeks Of Directors

Scotland wouldn’t be the first place that comes to mind when you think about good filmmakers, but Lynne Ramsay proves it to be true.

Born in Glasgow, Scotland in 1969, Ramsay studied photography at Napier College in Edinburgh before attending UK’s National Film and Television School where she specialized in cinematography and direction.

Ramsay said her parents, even though “they were simple” took her to see a lot of films and at 16, she saw Blue Velvet by David Lynch and was fascinated. “Like photography, directing enables me to concentrate on the details. This is probably the reason I chose to become a director,” Ramsay said in an interview at Cannes Film Festival in 2013, where she was a member of the Feature Film Jury.

Cannes has been a big part of Ramsay’s filmmaking career. In 1996, her short film, Small Deaths, which she had completed as a graduation film for school was accepted into the Cannes Film Festival and won the Jury Prize for short film.

“I remember that I borrowed a camera from the film school. In fact, the school administration was furious because I filmed for two weeks with this equipment. It was really a wonderful experience and I was deeply excited. I filmed in Scotland with non-professional actors. I remember how beautiful the light was. That was when I realised that directing is really something that I have a talent for and that suits me. It’s something I have inside me,” Ramsay said.

Ramsay completed two other short films before taking on her first feature,Ratcatcher (1999). It also screened at Cannes, opened the Edinburgh International Film Festival, and earned her The Guardian’s New Directors prize. She also won the Carl Foreman Award for Newcomer in British Film at the 2000 BAFTA Awards.

In 2002, Ramsay directed Movern Callar, which is based on Alan Warner’s novel of the same name.

Up to this point, all of Ramsay’s films had been shot in Scotland and were about Scottish people. After Movern Callar, she was slated to direct the adaptation of the American novel, The Lovely Bones. Ramsay actually read the book in manuscript form prior to the book’s publication and success. Due to the book’s popularity, the producers wanted a script more faithful to the book and Ramsay’s script did not fit with their expectations.

“After The Lovely Bones I was a bit shell-shocked for about a year,” Ramsay said in an interview with Time Out. “It’s hard when you’re led to believe you’re writing something which could be strong. Just to get into all that political bullshit was disheartening. It knocked me for six because no one was telling me what they thought about my script and it seemed they just wanted a replica of the book.”

During the time Ramsay was writing the script and the book’s release, Steven Spielberg became attached as one of the executive producers and he brought in Peter Jackson after Ramsay departed the project. 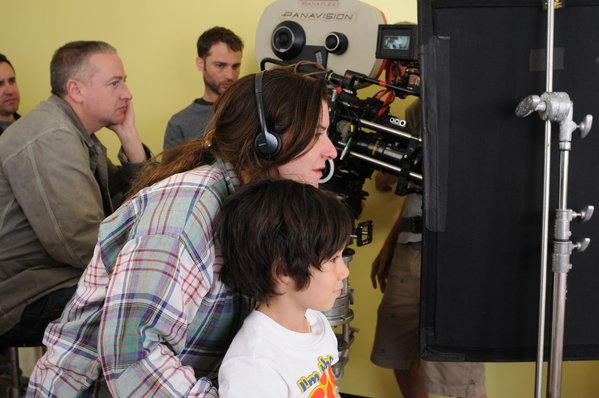 After a nine year gap, Ramsay returned with 2011’s We Need To Talk About Kevin. It is based on the novel of the same name by Lionel Shriver and is the first U.S. set film for Ramsay. Ramsay co-wrote the film with her husband Rory Kinnear.

Kevin, which stars Tilda Swinton, tells a cyclical narrative about a woman in the years after her son commits a high school massacre. Most of Ramsay’s films focus on the themes of grief, guilt, death and its aftermath. Ramsay creates unsettling on-screen atmospheres by using limited dialogue, instead preferring to tell the majority of the stories through images, repeated details, and sound design. There’s a scene in Kevin where you see the wind blowing through curtains and the sound of a sprinkler on the lawn outside and even though these are normal, everyday sounds and images, somehow, in the hands of Ramsay, it becomes the creepiest thing in the world.

Kevin really focuses on the relationship between Eva (Swinton) and her son (Ezra Miller). Her husband is present in many scenes but often he is just out of frame, instead focusing on Eva or Kevin.

“I loved it,” Ramsay said of filming Kevin. “The prep was a nightmare because the finance was touch and go. But once it was up and running it was great. We shot in America and some of the gaffers had done “The Godfather” and the script advisor had done a couple of Terrence Malicks! They were top-notch people working for no money at all. It was like making an American indie, I guess.”

Ramsay was slated to direct Jane Got A Gun, but quit the project the day before it started shooting. Although the producers accused her of being “derelict in her duties,” Ramsay denied all allegations and said she was still waiting on an approved schedule, script, and budget at the start of production. The lawsuit was settled in March of 2014 and the film, now with director Gavin O’Connor, was released in January to tepid reviews.

Her creative disagreements aren’t the only reason Ramsay sometimes feels like an outsider in the film world. Ramsay says she doesn’t fit into the British film industry that is predominately male and middle-class.

“I don’t speak the language. I can’t do the bullshit. Just talk to me straight. All this smiling sweetly when you’re about to stab someone in the back, it’s the English facility for diplomacy, I guess, but I cannae deal with it. I just think it’s a huge waste of time apart from anything else.”

“The film industry is completely sexist and completely class-biased. It’s not something I get on the ground level, it’s more from financiers and producers and distributors. It’s a way of dealing with you that is essentially patronising: I know better than you. I’ve shut up about it for years and I feel bad about saying it, but I know it’s there and it’s all-pervasive.”

Top photo: We Need To Talk About Kevin

This post was originally published on laurencbyrd.com and is reprinted here with permission.

Lauren C. Byrd is a freelance writer and blogger. After leaving Tennessee post-college, she has lived in Los Angeles, update New York, Queens, and Los Angeles again. She loves to talk about women in film, but also cares about good TV, documentaries, podcasts, true crime, journalism and social justice.

Tags: 52 weeks of directors , lynne ramsay
Support Feminist Media!
During these troubling political times, independent feminist media is more vital than ever. If our bold, uncensored reporting on women’s issues is important to you, please consider making a donation of $5, $25, $50, or whatever you can afford, to protect and sustain BUST.com.
Thanks so much—we can’t spell BUST without U.