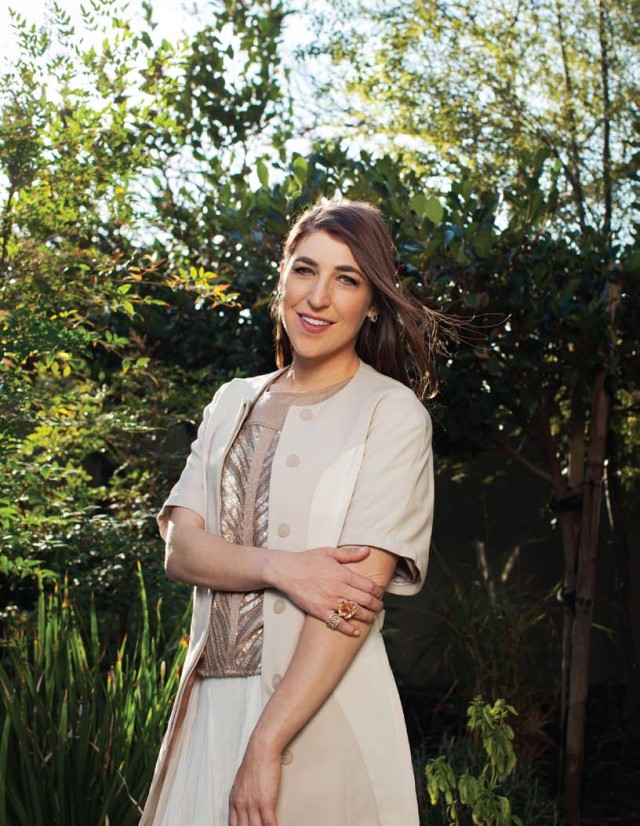 A lot has changed for Mayim Bialik since Blossom made her a pop-culture phenomenon. Here, The Big Bang Theory star discusses her return to acting, her new vegan cookbook, and why Joey Lawrence called her "a crazy, lunatic, feminist"

"I get it,” Mayim Bialik says over the phone when I ask if she knows what BUST is all about—the 38-year-old actress is already well acquainted with the magazine. “I was a Sassy reader,” she adds by way of explanation, name-checking the revered teen publication. “So I love everything you guys do.” Not only was Bialik a Sassy reader, but she was also its November 1992 cover girl, thanks to her role as one of the most iconic TV characters of the early ’90s: Blossom. For ?ve years, she was an emblem of girl culture, playing a ?oppy-hat-wearing teen who dealt with divorce, breakups, drug abuse, and sexual experimen-tation, always ?anked by her best friend, Six, and dumb-jock older brother Joey (played by Joey Lawrence). But aside from a few guest appearances, including one as the lesbian daughter of Larry David’s friend on Curb Your Enthusiasm, Bialik took a big break from television after Blossom wrapped in 1995. It’s not like she wasn’t busy, though. She got married, had two kids (Miles, now eight, and Frederick, ?ve), got a Ph.D. in neuroscience at UCLA (nbd), and got divorced. But now she’s back at the forefront of main-stream pop culture—playing, coincidentally, a nerdy neuroscientist on network TV’s highest-rated show, The Big Bang Theory.

Bialik will be the ?rst to tell you that there aren’t many women like her in Hollywood, which is one of the reasons it’s so awesome she’s there, battling stereotypes and being opinionated about just about everything. She’s an advocate for the  controversial child-rearing philosophy known as attachment parenting—which hypes breast-feeding, co-sleeping, and baby-wearing—and even wrote a book about it (Beyond the Sling: A Real-Life Guide to Raising Confident, Loving Children the Attachment Parenting Way). She practices many tenets of Modern Orthodox Judaism, including never wearing pants or going sleeveless in public and observing Shabbat, essentially shutting down for 25 hours every Friday evening. She’s probably the only red-carpet walker who’s never had a manicure (“I don’t know if it’s not my schtick because I’m kinda boyish or because I’m a feminist or both”), and though she donned designer clothes for our photo shoot, she showed up wearing 20-year-old Dr. Martens and wiped off every trace of make-up before she left. While most actresses seek out endorsements from the likes of Cover Girl or smartwater, Bialik is a spokesperson for Texas Instruments, going to schools and encouraging girls to follow their STEM (science, technology, engineering, and math) dreams. She’s also a loud and proud vegan, getting real about the bene?ts of an animal-product-free lifestyle and sharing tons of original recipes in her new cook-book, Mayim’s Vegan Table: More Than 100 Great-Tasting and Heal-thy Recipes from My Family to Yours. On a rehearsal break on the Big Bang set, she chatted with me about the empowering nature of cooking, not shaving, and the entirely unexpected reason she reentered the acting world.

Was your veganism an evolution, or was there a decisive moment for you?
It came in stages. First, things just started tasting weird, and then [when I cut out meat] I realized I didn’t feel guilty after eating. It grew as I became more educated. I started feeling like I was making more conscious decisions in terms of the environment and ethics and how workers are treated. [But] this is not like some club that kicks you out. Everyone should be eating more whole foods—it’s not like there’s an all-or-nothing rule.

Many second-wave feminists fought to get out of the kitchen, and now women are returning to their stoves in droves. Do you look at your love of cooking through a feminist lens?
I do identify with second-wave feminism academically, absolutely. But I also come from an immigrant family and a tradition of observant Judaism where cooking is a huge integral part. I grew up with a mother who was both very liberated, very outspoken—which honestly was a feminist statement in the community she came from—and also someone who put a strong emphasis on cooking, cleaning, sewing, and keeping house. I’m glad I was raised with a love and appreciation for the things that I can do with my hands that are distinctively female in my culture. Should it only be like that? Should there not be a way for women to break out? Of course not! But for my family, those things were able to exist side by side.

"I’m glad I was raised with a love and appreciation for the things that I can do with my hands that are distinctively female in my culture."

Growing up in a household like that, did you always identify as a feminist?
Yes. I’ve been teased and mocked for being a feminist at least from the sixth grade on. I’ve never shaved my legs, which was absolutely part of my feminist identity. Even when I was on Blossom, Joey Lawrence would always give me a hard time—I mean, playfully—but he would call me, like, a crazy, lunatic feminist.

You’ve been in the industry for a long time. How have women’s roles in Hollywood changed?
I think we’ve seen a real swing toward more—mmmm, it’s hard to say it without sounding snarky—more “classic” lines of beauty. Very skinny women with very large breasts are very much back in. There had been a time when ethnic beauty made its way into more of the mainstream, but I think we’re back to a lot of traditional notions of what heterosexual men often ?nd attractive. But you do see female crew members now, camera people, sound people—that’s something that I literally never saw when I was a teenager. Now you see women doing all sorts of jobs, not just in equal proportion to men but to a larger extent, and it’s amazing.

What brought you back to acting after such a long break?
The true story is I was running out of health insurance. I ?gured if I could just work enough, at least I’d have insurance for my kids and me. So I started auditioning. I did not anticipate that I’d be a full-time actor on a television show again, so I feel very lucky, but it was really not the plan [laughs].

You literally wrote the book on attachment parenting. Why do you feel so strongly about that technique?
A lot of it was the science; my thesis was on the hormones of human attachment. I just feel like the woman’s body is what carries a baby and spits it out, and you’re given breasts to breastfeed, so it seems evolutionarily intuitive. It’s not the only way, and it may be very offensive to a lot of feminists. Believe me, from an academic stand-point, I completely agree that any style of parenting that chains you to your child sounds like a pretty complicated challenge to a feminist identity [laughs]. But I think what’s amazing and interesting and beautiful about being a woman is there’s no rule about how I have to be. There’s no box that I have to ?t into. I’m a lot of different things, and I can hold all of those truths.

Alex Mack, Topanga, Blossom: Here’s What Your Favorite ‘90s Girl Stars Are Up To Today

'Dating Your Dad' Is Awful On So Many Levels

Tags: BUST interview , Mayim Bialik , Blossom , Big Bang Theory , feminism , from the magazine , from the archives
Support Feminist Media!
During these troubling political times, independent feminist media is more vital than ever. If our bold, uncensored reporting on women’s issues is important to you, please consider making a donation of $5, $25, $50, or whatever you can afford, to protect and sustain BUST.com.
Thanks so much—we can’t spell BUST without U.