NEWS FLASH: THIS WORLD isn’t exactly kind to fat people. Studies show that big folks are discriminated against in almost every aspect of life. Thankfully, we have Stacy Bias and her Rad Fatty Merit Badges to lighten the load. 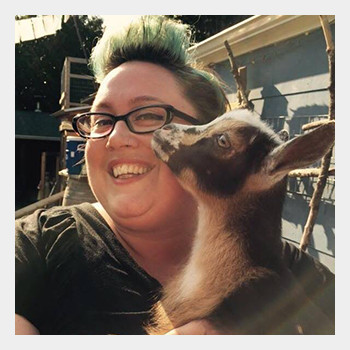 Stacy Bias, Fat Activist and Creator of Rad FattyBias, a London-based activist, came up with the idea of making badges that celebrate the small accomplishments of large people after she watched a hateful anti-fat viral video. “I went to bed thinking about how many people got to the end of that ugly, bigoted rant feeling less convinced of their intrinsic value as human beings,” she says. Inspired into action, the next morning she drew her first round of badges—including “Flew While Fat,” “Took Up Space,” and “Concern Trolled, Didn’t Fold.” She put them up on Indiegogo, and by the end of their time on the crowdfunding site, the badges were overfunded by 832 percent.

On her website, RadFatties.com, Bias is not only selling the badges, but is also collecting stories from people who earned them. As a result, her site is now packed with folks sharing about how they “Went To The @#$% Doctor” and “Survived Side-Eye.” The project has also attracted tons of positive press. “I’ve been a fat activist since 2002,” she says, “and I’ve never had press that’s so overwhelmingly celebratory.”

‘Plus Size Women Shouldn’t Do Yoga?’ This Video Proves All The Stereotypes Wrong