Details
BY Emily Rems
IN Eat Me
Published: 19 October 2012 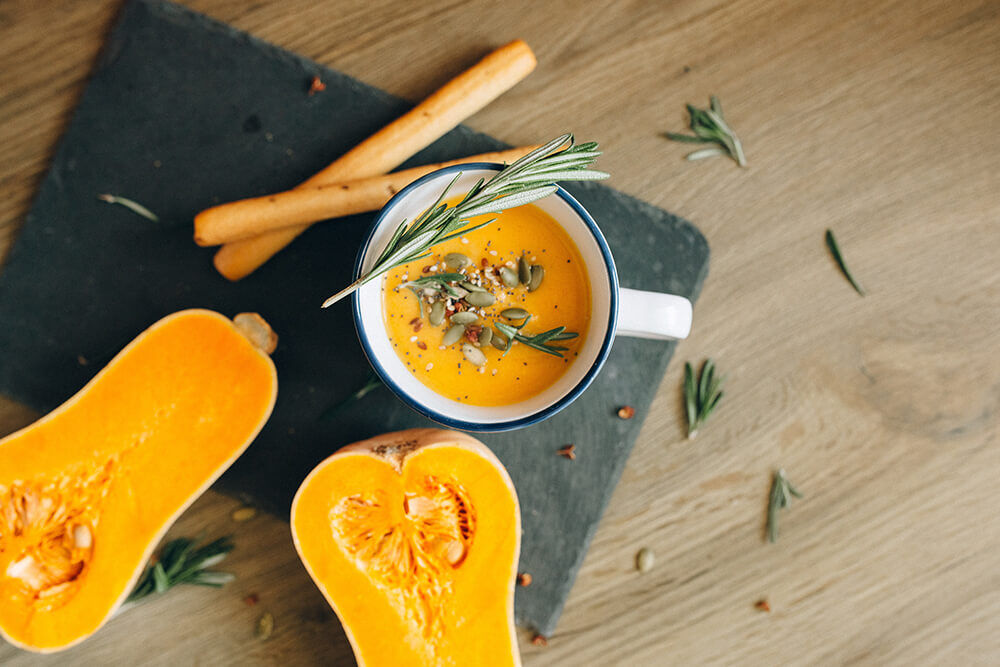 There’s something about fall that makes orange food taste even better. Pumpkin-flavored goodies are offered at every coffee shop. Candy corn is calling from the shelves of every drug store. And butternut squash soups like this one from the new release The Karma Chow Ultimate Cookbook: 125+ Plant-Based Vegan Recipes for a Fit, Happy, Healthy You by Melissa Costello are simmering on many a stovetop. I was drawn to this particular recipe because Costello’s soup gets it’s velvety consistency and vibrant color from a trifecta of hearty orange veggies that are now in season: butternut squash, sweet potato, and carrots. Try it this weekend and let each bite warm you right down to your toes.

I love the fall because squash is in season, and butternut is one of my faves! This soup is so good you will want to eat the whole pot
—that’s why I termed it “dreamy.” Top with some lightly toasted pumpkin seeds right before serving for presentation, crunch, and a little extra calcium and magnesium.

(this can be done a day before serving)

Sea salt and pepper, to taste

Heat the oven to 400 degrees F. Cut squash in half lengthwise. Line a baking dish or cookie sheet with parchment paper and lightly coat with cooking spray (olive oil or coconut). Place the squash cut side down on the baking dish or sheet and poke holes in it with a sharp knife or fork, then spray squash with cooking spray. Bake for about 45 minutes or until the squash can be easily pierced with a fork. Take out of the oven and let it cool.

Heat the oil in a large pot over medium heat. Add the shallot, onion, and ginger, and sauté for about 3 minutes until soft and translucent. Add the yam, celery, and carrots. Sauté for a few minutes and then add the cumin powder, stirring to incorporate. Add the broth. Cover the pot and bring to a boil. Turn down the heat and simmer until the vegetables are tender, about 20 minutes.

While the soup is cooking, remove the seeds from the squash and discard. Scoop out the flesh from the skin and add to the pot, stirring to incorporate the squash with the other vegetables. Add a bit more broth if necessary. Cook for about 5 more minutes, then remove from the heat and add the agave nectar, salt and pepper, cinnamon, nutmeg, cloves, and the almond milk. Puree the soup using a hand blender or in batches in a regular blender. Serve garnished with toasted pumpkin seeds.

*Did You Know? Maple syrup is chock-full of vitamins and minerals. Make sure to buy grade B, which is the most nutritious and least processed. It’s a low-glycemic sweetener, so it won’t spike your blood sugar as fast as some other sweeteners.

Tags: Vegan , Butternut Squash , Soup , Karma Chow Ultimate Cookbook , Melissa Costello
Support Feminist Media!
During these troubling political times, independent feminist media is more vital than ever. If our bold, uncensored reporting on women’s issues is important to you, please consider making a donation of $5, $25, $50, or whatever you can afford, to protect and sustain BUST.com.
Thanks so much—we can’t spell BUST without U.