Bake It In A Cupcake: 2 Delicious Recipes 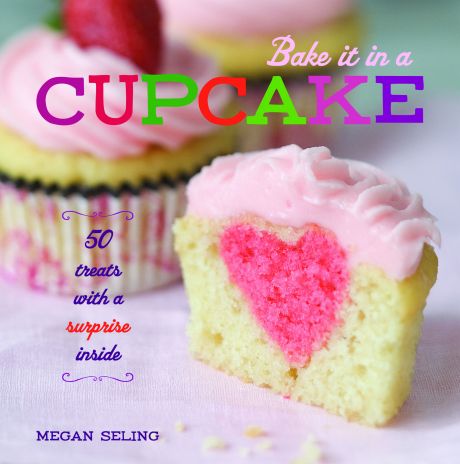 You can take your cupcake craze to the next level with Megan Seling’s new cupcake cookbook, Bake It in a Cupcake: 50 Treats With A Surprise Inside. Since launching her blog, Bake It In A Cake, Seling has developed delicious cupcakes filled with a second treat hidden inside – fruit, a chocolate kiss, a mini pie, or another cupcake. Bake It in a Cupcake contains 50 cupcake recipes, accompanied by step-by-step instructions. You can try two of them below.

If you’re in Brooklyn, you can come to the Bake It in a Cupcake book party and signing on Saturday, October 27, from 2 to 4 p.m. at Gourmet Guild Williamsburg (110 Broadway). You’ll get a free cupcake with your purchase of the book!

And now, without further ado, the recipes: 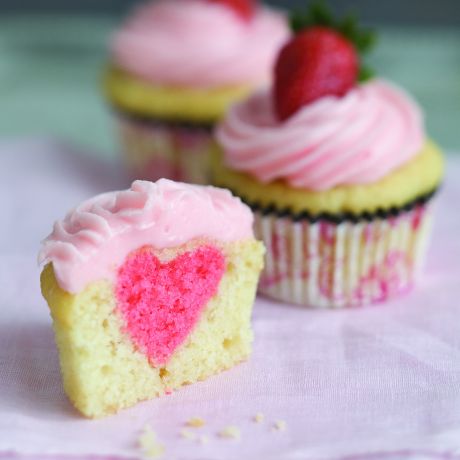 These vanilla bean cupcakes really have heart. Cut or bite into one to see how much love went into them. The best part: They’re surprisingly simple. And if your sweetheart happens to be a chocolate fan, you could just as easily bake your heart into some chocolate cake batter. If you go that route, I recommend finishing them off with a generous spoonful of decadent ganache for a true death-by-chocolate experience.

1. To make the cupcakes, preheat the oven to 350°F, use a nontoxic marker to make a small dot on the edge of 12 paper liners, and place them in one standard muffin tin, with all the dots facing the same direction. Use a stand mixer fitted with the paddle attachment or a hand mixer on medium speed to combine the butter and sugar for 90 seconds, until fluffy. Add the eggs, one at a time, mixing in each egg completely before adding the next. With the mixer on medium-low speed, add the vanilla seeds, baking powder, baking soda, and salt. Use a spatula to scrape down the sides of the bowl, then turn the mixer up to medium-high speed and mix for an additional 30 seconds, until all the ingredients are well combined. Finally, add the flour, ½ cup at a time, alternately with the milk, ⅓ cup at a time, mixing until each addition is fully incorporated before adding the next. Scrape down the sides of the bowl one more time and continue to mix the batter on medium-high speed another 30 seconds. It should be smooth and creamy.

2. Pour approximately 1½ cups of the batter into a smaller bowl. This will be for the hearts. Use a spoon to stir in red food coloring, 2 or 3 drops at a time, until you get your desired shade of red or pink. Keep in mind the color will lighten a little while baking. Pour the pink batter into a nonstick or lightly greased 8-inch square baking pan and bake for about 20 minutes, until a toothpick inserted into the center of the cake comes out clean. Allow the cake to cool completely. (It’s okay to stick it in the fridge to speed it up—I’m impatient, too.)

3. Once the sheet cake is cool, loosen the cake from the pan by running a knife around the edges of the cake. Carefully invert the pan onto a cutting board. Use a 2-inch heartshaped cookie cutter to cut out 12 hearts. If you can’t find a small heart-shaped cookie cutter, draw a heart on some clean cardboard and use that as a stencil to cut the hearts out with a small knife.

4. Spoon 2 heaping tablespoons of the remaining plain batter into each cup in the prepared tins. Place a heart in each cup, with the bottom of the heart pointing down and the front of the heart facing the dot on the cupcake paper. Press the heart gently into the batter. Cover the top of the heart with a teaspoon of batter. Bake for 24 minutes, or until the edges of the cupcakes have started to turn golden brown and the cake springs back when you gently press your finger into the top of it. Allow the cupcakes to rest in the tins for 10 minutes before transferring them to a wire rack to cool while you make the frosting.

5. To make the frosting, melt the taffy and cream together in a microwave in a small, microwave-safe bowl for 20 seconds on high. Stir and microwave for another 20 seconds, repeating until the mixture has melted. When the taffy mixture is smooth, put the bowl in the fridge so it cools a bit before being added to the frosting (the cream will keep the taffy from hardening).

6. Meanwhile, using a stand mixer with the whisk attachment or a hand mixer, whip the butter for 30 seconds at medium speed until creamy. Add the powdered sugar 1 cup at a time, whipping at medium speed until fluffy. With the mixer on medium-low, drizzle in the cooled taffy cream.  Finally, turn the mixer to high and whip the frosting for 30 seconds, until it is pale pink and fluffy. If you’d like the frosting to be a darker shade of pink, add a couple drops of red food coloring. Pipe or spread the frosting on top of the cupcakes. Place a candy heart on top of each cupcake, point down, facing in the same direction as the dot on the cupcake wrapper so people will know which way to bite into the cupcake to see the heart. Love! 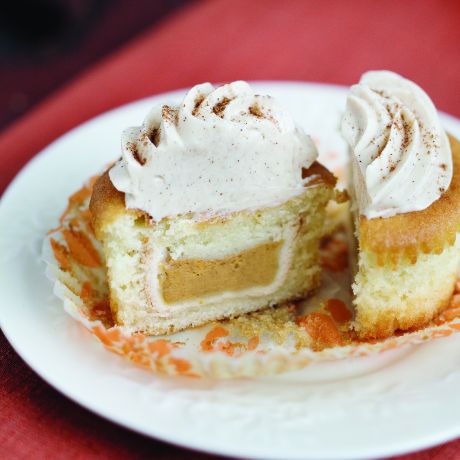 This has been, hands down, the most popular Bake It in a Cupcake creation to date. That’s not very surprising when you consider that pumpkin pie is the second most popular pie in America. To save time, you can make the miniature pies up to 2 days in advance — just store them in the refrigerator until you’re ready to make the cupcakes. The pies can also be prepared quickly with premade pie crust—as I’ve said, there’s no shame in taking shortcuts. Though they sound like the perfect Thanksgiving dessert (and they are), I’ve done plenty of research and am happy to confirm that they taste just as good at any time of year.

Pumpkin Pies
1 (16-ounce) batch pie crust dough (your favorite recipe or store-bought, enough to make 2 one crust pies)
1 (15-ounce) can pumpkin pie filling, made as directed on the can

1. To make the mini pumpkin pies, preheat the oven to 425°F and lightly grease a 24-cup miniature muffin tin. Use a rolling pin to roll out the pie crust dough on a lightly floured smooth surface until the dough is about ⅛ inch thick. Then use a 2½-inch circular cookie cutter to cut out 24 small disks. Ball up the scraps of dough and wrap in plastic wrap for later use.

2. Press the dough circles into each cup in the prepared tin and fill three-quarters full with the prepared pumpkin pie filling. Keep in mind the pumpkin pie filling will expand a bit while baking. Bake the pies for about 7 minutes. With the pies still in the oven, turn the oven down to 350°F and bake for an additional 7 to 10 minutes, until the edges of the crust have browned and the pumpkin pie filling no longer jiggles when you gently shake the tin. Allow the pies to cool for 5 minutes in the tin and then carefully transfer them to a wire rack to finish cooling while you mix the cupcake batter.

3. To make the cupcakes, line 2 standard muffin tins with 24 paper liners. Use a stand mixer fitted with the paddle attachment or a hand mixer on medium speed to combine the butter and cream cheese for about 90 seconds, until smooth. Add the sugar and mix on medium-high until fluffy. Add the eggs, one at a time, mixing in each egg completely before adding the next. With the mixer on medium speed, add the vanilla, baking powder, baking soda, and salt. Finally, add the flour, ½ cup at a time, alternately with the milk, ⅓ cup at a time, mixing until each addition is fully incorporated before adding the next. Continue to mix the batter on medium-high speed for 30 seconds, until smooth and creamy.

4. Spoon a heaping tablespoon of batter into each cup in the prepared tins. Place a cooled pumpkin pie into the center of the batter and press it gently. You don’t want the pie to touch the bottom of the tin. Cover the pies with another heaping tablespoon of batter so the top and sides of the mini pie are completely covered and the cup is about three-quarters full. Bake for 25 minutes, until the edges and tops of the cupcakes have turned golden brown and the cake springs back when you gently press your finger into the top of it. Allow the cupcakes to cool in the tins for at least 10 minutes before moving to a wire rack to cool completely.

5. To make the frosting, melt the cream and cinnamon chips together in a microwave in a small microwave-safe bowl for about 45 seconds on high. Stir the mixture until all the chips have melted and place in the fridge while you prepare the rest of the frosting. Using a stand mixer fitted with a paddle attachment or a hand mixer, cream together the butter and cream cheese on medium-high speed for about 30 seconds, until smooth. Whip in the powdered sugar, 1 cup at a time, until the mixture is fluffy. Finally, with the mixer on low, drizzle in the cinnamon chip mixture. (Make sure it has cooled a bit—if it’s too hot, it will melt the frosting.) Spread or swirl a generous helping of the frosting onto the cupcakes using a spatula or pastry bag.

6. Put the leftover pie crust scraps to good use by making cinnamon-sugar decorations. Mix the sugar and cinnamon in a small bowl. Use a rolling pin to roll out the reserved ball of dough onto a lightly floured smooth surface until it’s about Å⁄8 inch thick, then cut out quarter-sized circles with a small cookie cutter or frosting tip. Place them on a baking sheet, sprinkle them with a little bit of the cinnamon and sugar mixture, and bake for about 10 minutes at 350°F, until they’re golden brown. Once they’re cool, put one on top of each of the cupcakes and serve.

Can’t find cinnamon baking chips at your local market? You can make a delicious alternative by tossing 1 cup white chocolate chips with 2 teaspoons ground cinnamon. Then follow the frosting recipe as directed.

From Bake it in a Cupcake: 50 treats with a surprise inside by Megan Seling, Andrews McMeel Publishing

Tags: cupcake , cupcakes , pumpkin cupcake
Support Feminist Media!
During these troubling political times, independent feminist media is more vital than ever. If our bold, uncensored reporting on women’s issues is important to you, please consider making a donation of $5, $25, $50, or whatever you can afford, to protect and sustain BUST.com.
Thanks so much—we can’t spell BUST without U.