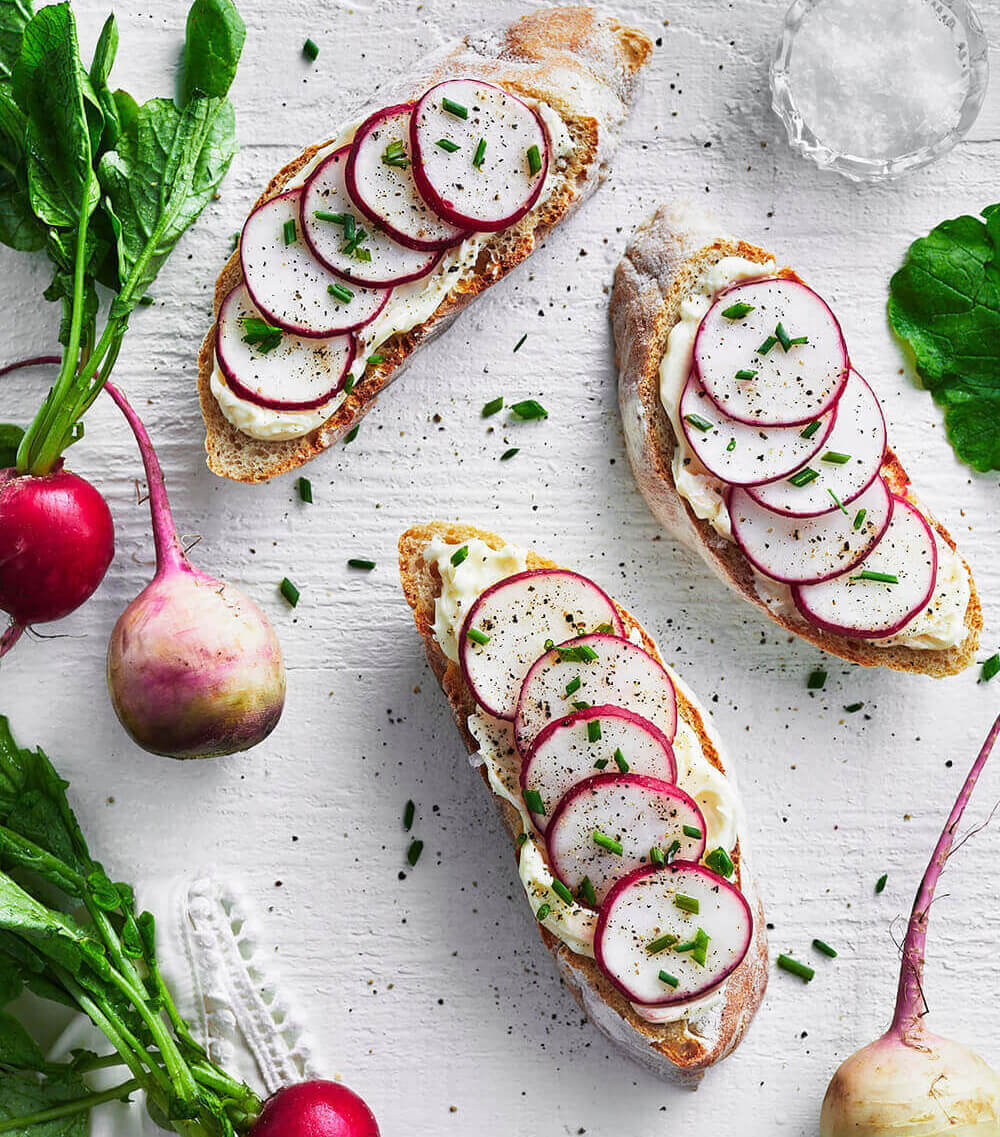 This crunchy, zesty veggie is the unsung hero of spring snacking

Growing up, the only radishes I knew were the little round red ones that showed up sliced like a pile of nickels on top of my salad. Sometimes I could blame a restaurant for the travesty, but usually it was Mom trying to be fancy. I attempted to like them, but the spicy bite* was too much for me. It wasn’t until a girlfriend of mine introduced me to radish and butter sandwiches that I really turned around. I learned to appreciate their crispy, zestiness. Now, I’m a card-carrying member of the radish appreciation club! Here are a few recipes to get you in the mood to ravish the radish.

This works great with traditional red radishes, but if you want to go really pretty, use watermelon radishes. I also love the more mellow French breakfast radish. Trim the ends of a bunch of radishes of your choice. Thinly slice radishes with a sharp knife or mandoline. Cut a baguette widthwise at an angle for oval-shaped slices about a quarter-inch thick. Slather bread with softened sweet butter; cover with radish slices. Sprinkle with sea salt and devour. Adding freshly ground pepper and sliced chives is nice, too.

Peel 1 pound each of carrots and daikon radishes, then grate or cut them into a fine julienne and cover with water (this can be done the day before). Make the dressing by mixing a big shot of rice wine vinegar and a small shot of tamari (you want a 2-to-1 ratio). Sweeten to taste with honey or maple syrup (I like a drizzle or two). Add a good plop of minced ginger and a squeeze of sriracha. Drain your carrots and daikon an hour before serving, mix with dressing, then add salt and pepper to taste.

Throw a handful of pitted Kalamata olives, a smidgen of capers, and a drizzle of olive oil in the food processor and pulse until well chopped. Slice any kind of radish into quarter-inch thick circles. Dollop each slice with a spoonful of olive tapenade, and garnish with thinly sliced scallions, chives, or chopped parsley.

* If you want to get rid of the bite of raw radish, soak it in water for an hour or up to several days.

Tags: radish , radishes , sandwich , recipes , tapenade , coleslaw , spring recipes
Support Feminist Media!
During these troubling political times, independent feminist media is more vital than ever. If our bold, uncensored reporting on women’s issues is important to you, please consider making a donation of $5, $25, $50, or whatever you can afford, to protect and sustain BUST.com.
Thanks so much—we can’t spell BUST without U.