Details
BY Rebecca Katz
IN Eat Me
Published: 25 January 2022 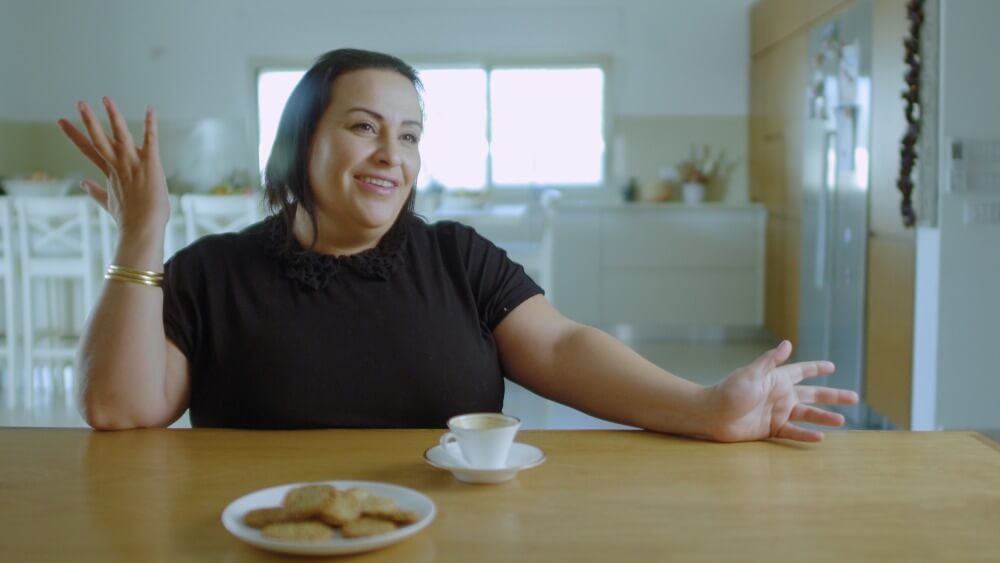 Breaking Bread, Beth Elise Hawk’s directorial debut, is a stunning documentary on Israeli and Arab chefs working together for a food festival that gives us a rare portrait of friendship and togetherness in the Middle East. The hour and a half long film, which was selected to premiere at over 65 film festivals, is out in theaters on February 4, 2022.

Israel has been a hotbed of war and violence for decades. Since the British declared it a “Jewish state” in 1948, Arabs (who were living there previously) and Jews were pitted against each other and continue to fight over borders and territory to this day. Depictions of the country in the news and popular media constantly show it as a brutal place full of hatred and bloodshed, but that is not the full picture.

In the beginning of Breaking Bread, we pan to a gorgeous coastline in Israel’s Haifa, Israelis and Palestinians joyfully roam the streets at night – they taste simmering lamb dumplings and dip soft, warm laffa bread into garlicky hummus. They clink glasses, sip red wine, and simply enjoy one another’s company. These are not the violent images of a war-stricken city that we are usually fed. We have entered an entirely different Israel.

Hawk’s film focuses on the A-Sham food festival, founded by Dr. Nof Atamna-Ismaeel. The festival started in 2015 and takes place in Downtown Haifa on one weekend every December. Before the festival, chefs from different political and religious backgrounds are paired to work together for weeks in order to conceptualize and create mouthwatering dishes for patrons to taste at the festival. The resulting food and friendships that are formed are a model of multiculturalism in a country that is starkly divided. 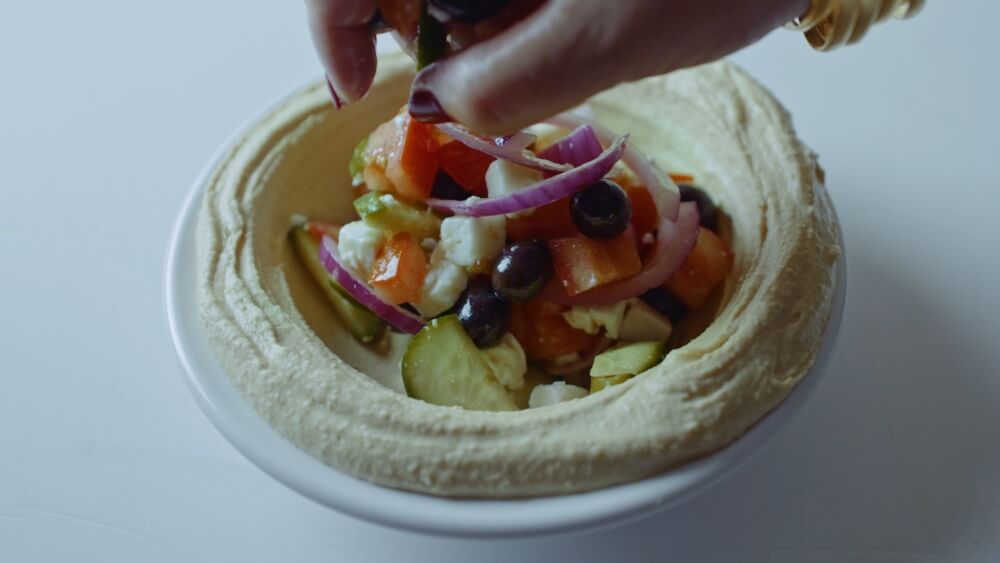 In 2014, Dr. Nof Atamna-Ismaeel, a microbiologist and mother of three from a small Arab town in Northern Israel, was the first Arab-Muslim to win Israeli MasterChef at just 33 years old. Since winning, Atamna-Ismaeel has made it her mission to use food to foster authentic coexistence in a region where people have been divided by religion, geography, and law.

When director Beth Elise Hawk heard Atamna-Ismaeel’s story on the radio, she was immediately captivated. She said:

In today’s world where we are bombarded with stories about division, I was driven to tell this story about commonality. 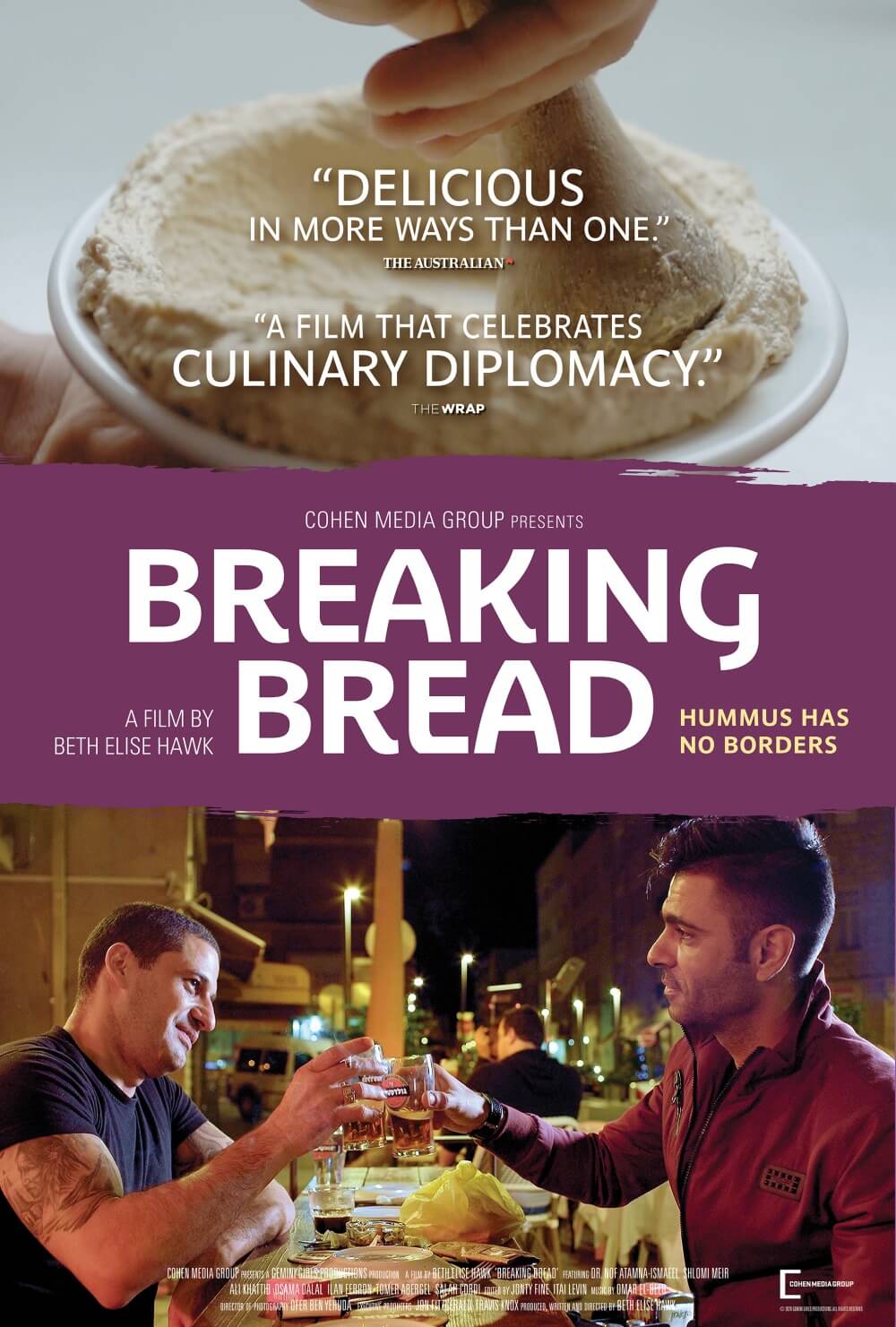 While the film’s protagonist is Atamna-Ismaeel, it also highlights the inspiring stories of many chefs in Haifa. One of my favorite pairs was Shlomi Meir and Ali Khattib. Shlomi, a family man and third generation owner of Haifa’s Maayan restaurant, is inspired by his grandfather’s Ashkenazi, Jewish cooking. He smokes meat in his restaurant under an old portrait of his grandparents. He is paired with Ali, a 27 year old Arab chef from a village on the border of Lebanon. Ali’s cooking is inspired by his grandmother’s unique Syrian dishes – kishek, fattoush, dolma. Ali so badly wants to share his grandmother’s cooking with the world. “This is something very important to me. That Arabic cuisine makes its way into the kitchens of Jewish chefs,” he says. 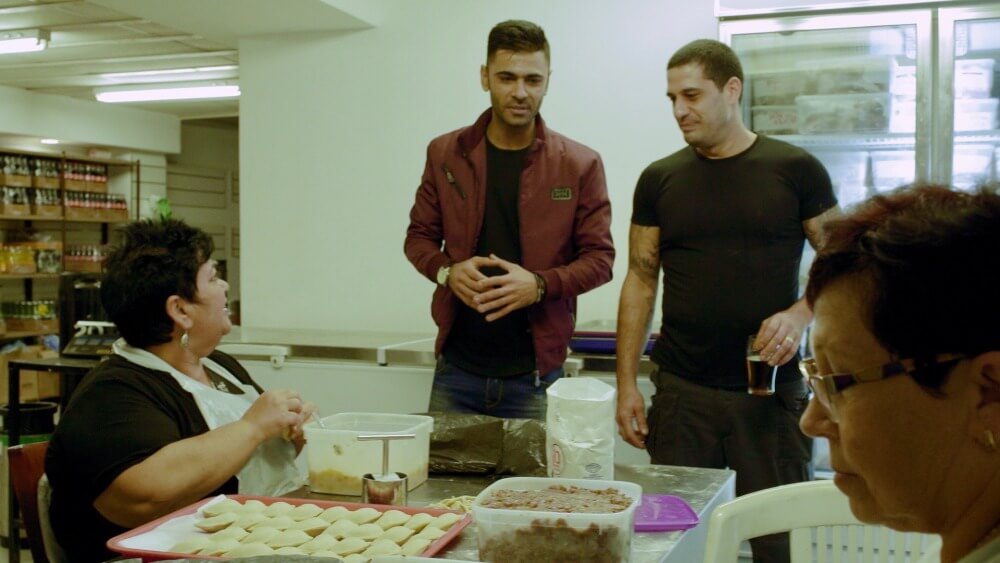 Shlomi and Ali’s relationship doesn’t feel trite or forced. Leading up to the festival they truly get to know each other. Over the course of the film, it is clear that they recognize themselves in each other. Through Atamna-Ismaeel’s courageous ambition and Hawk’s clear directorial vision, we are able to see a pure connection that can result when two people take the time to understand each other’s culture and identity.

Although the director and star of the film are both women, the rest of the documentary is essentially all male chefs. This isn’t surprising given that professional kitchens are almost always male dominated. Still, the film could do a better job of highlighting and lifting the few women in Israel’s culinary world. 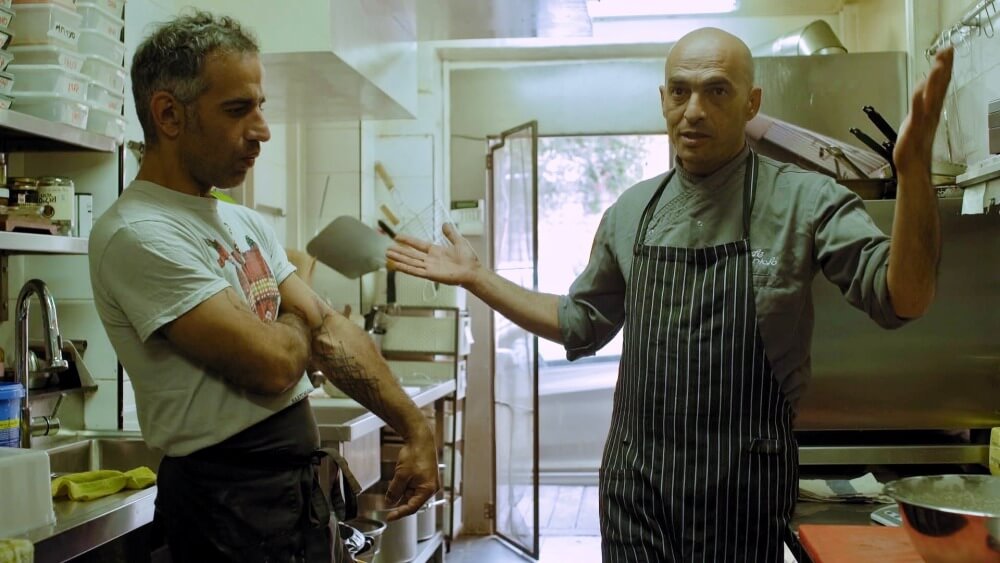 The documentary shows us that even food has become politicized in Israel – people fight over whether the classic Middle-Eastern tomato and cucumber salad should be called “Arabic salad” or “Israeli salad.” This is yet another example of the real political conflict at play: who was here first and who is entitled to the land?

In the film, we are introduced to traditional Arabic recipes that have not been assimilated into mainstream Middle Eastern cuisine – savory qatayef (an Arab dumpling) or taashimi (levantine whole fish baked in crust), or sweet Levantine desserts. 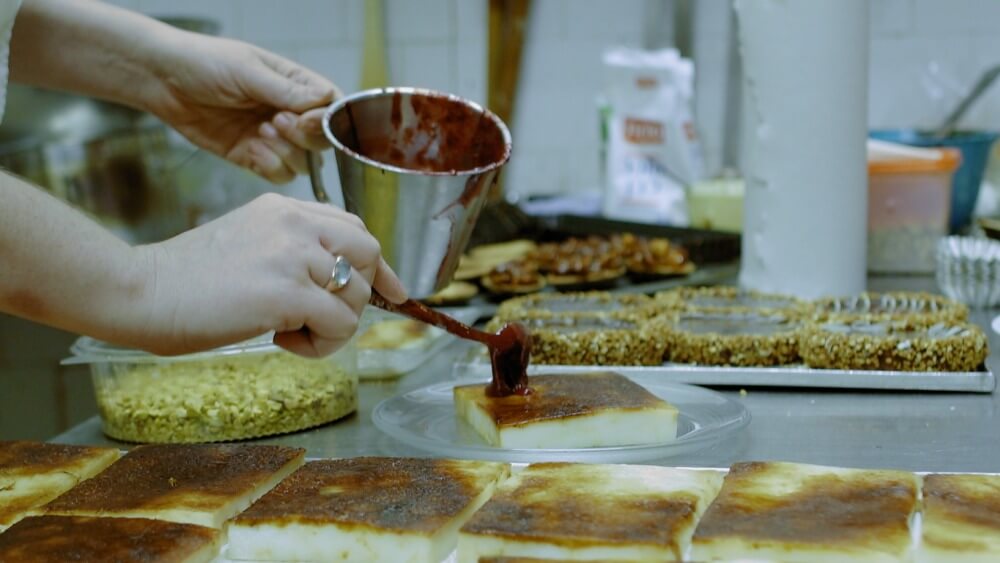 Seeing the ingredients and recipes that all of these different chefs use shows how strikingly similar all of the Middle Eastern cultures and cuisines really are. Atamna-Ismaeel ensures that all of the chefs prepare dishes that have personal history and meaning. She tries to shift the political focus onto something intensely personal. She wants people to learn about where these foods originally came from and what they personally mean to the chefs making them at the festival.

My favorite scene in the film is when Ali brings Shlomi his grandmother’s kishek recipe (a dried fermented dairy product). His mother cuts the wheat herself and soaks it in yogurt for a week. She rolls it into balls and dries it in the sun for 20 days. Ali holds up a plastic yellow bag with a giant bundle of the crispy kishek. Shlomi tastes one slowly. “It reminds me of the cookies my grandmother made,” He eagerly takes another handful, “this is really something,” he remarks, smiling. 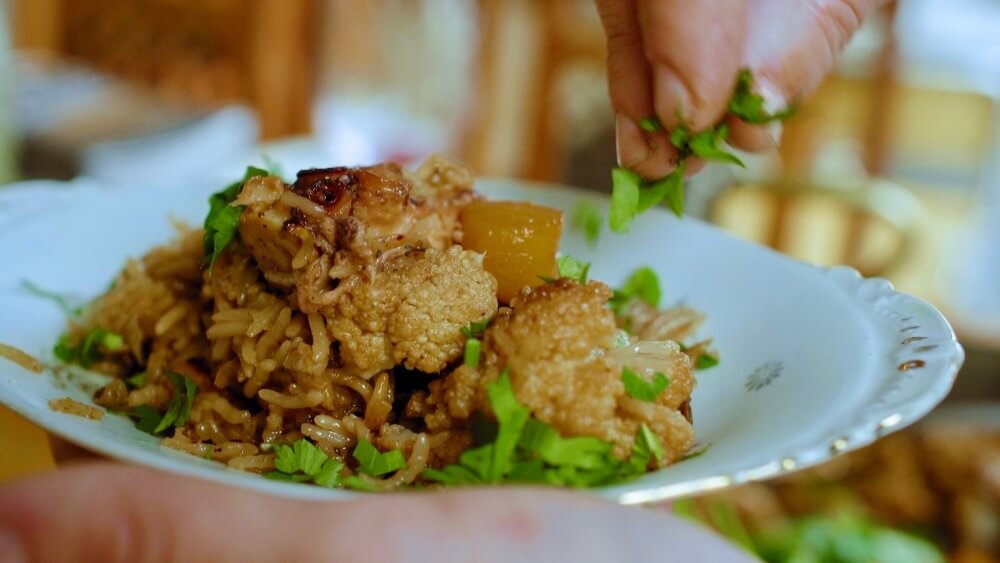 Politics has entered every sphere of life in Israel and conflict between Israelis and Palestinians remains incredibly complicated, but this film gives us a much-needed look at real camaraderie and co-existence in the region.

Towards the end of the film Atamna-Ismaeel stands closely in front of the screen. Behind her, the vivacious murmur of Haifa crackles in the background. “I know it sounds funny, you’re going to use food to bring world peace? No, I am not. I’m going to use food to change a few people. And if you change a few people and other people do the same, then maybe we will succeed together to make a huge change.”

At points the film feels overly idealistic, but so much of the political strife and fate of Israel is not in civilian control. Much of the real power resides in the hands of the people in governmental institutions – at the United Nations and the Israeli consulate. For the people living in the country day-to-day, maybe sharing a steaming plate of sumac roasted chicken and sharing their cultural and familial history is a step together and a step forward.

Breaking Bread is out in select U.S. theaters (New York and Los Angeles) beginning Friday February 4, 2022. Find a theater near you here.