Details
BY BUST Magazine
IN Eat Me
Published: 25 March 2020 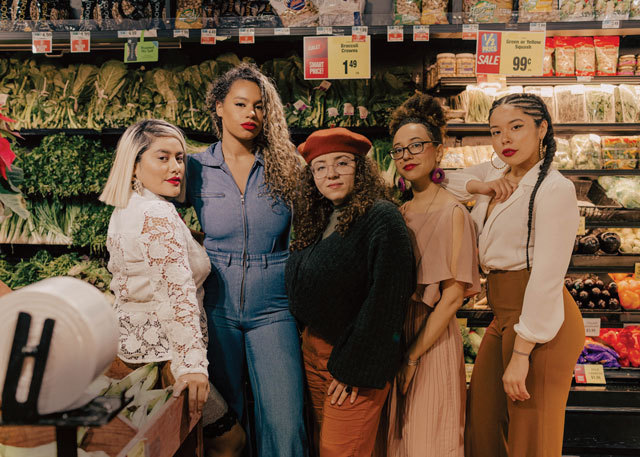 IN 2017, AMY QUICHIZ was a recent college grad from Queens, NY, who wanted to eat healthier after too much student-style sustenance. So she began collecting plant-based recipes from other Latinx people in her community. “People wanted to share how their kids are vegan, how they do gardening, or how they live a low-waste lifestyle,” she says. “And I was like, ‘Wow, this can be more than just recipes.’” With the help of her friend Mariah Bermeo, Quichiz launched Veggie Mijas, a vegan-focused collective of women and non-binary folks of color that creates safe spaces for people to share resources, recipes, and their experiences with food—all through an intersectional lens. The group now has 12 U.S. chapters, connecting people through community-building events like potlucks and farm sanctuary trips.

In addition to dismantling “white veganism”—mainstream veganism that tends to exclude people of color and low-income communities—Veggie Mijas aims to help people decolonize their diets. America’s colonial history created a standard way of eating that’s heavy on meats, processed grains, and sugar, disregarding the varied cultures of the people eating it and the many native plants that Indigenous people had been cultivating for generations. Our industrial farming system has created a huge disconnect between the food on our plates, and the process of growing it. (And often exploits minority and immigrant communities for labor.) This system is detrimental to our health, and the planet’s as well. According to Quichiz, decolonizing your diet means reconnecting with healthier and more sustainable ways to nourish your body, while encouraging ancestral knowledge. Here’s how she suggests making a more conscious Earth-food-body-culture connection.

“Start with questioning what’s on your plate and where it’s coming from,” Quichiz says. Think about production and how your food is labeled. Is it ethically grown and sourced? Why is it so cheap? For example, fast-food factories pollute the air and drinking water in low-income communities of color where these industries are often located. This amounts to environmental racism. We should also consider that exploited factory workers of color make many of our cheap, processed food products. Becoming aware of these factors can help you conceptualize your role in perpetuating or dismantling systems of oppression.

“I think decolonizing also means redefining what culture means when it comes to your food,” says Quichiz, who’s Peruvian and Colombian. Ask your family about what they used to eat and what plant-based recipes they have in their own cultures, and incorporate them into your diet. For many folks of color, it may feel like there’s a trade-off between being vegan and maintaining one’s heritage, but Quichiz says, “You can definitely keep your culture and be vegan.”

“Veganism can be a great way to start realizing who you are and where you come from,” Quichiz says. “As a queer Latina, it’s important for me to reclaim all parts of myself—my womanhood and what that means, my queerness, and also my ancestors—through the simple act of eating.” Thinking critically about food and its influences changes the way you view the world. “If you start with yourself and your plate, you can definitely get there.”