How To Make Vegan Popcorn Balls

Details
BY BUST Magazine
IN Eat Me
Published: 04 October 2018 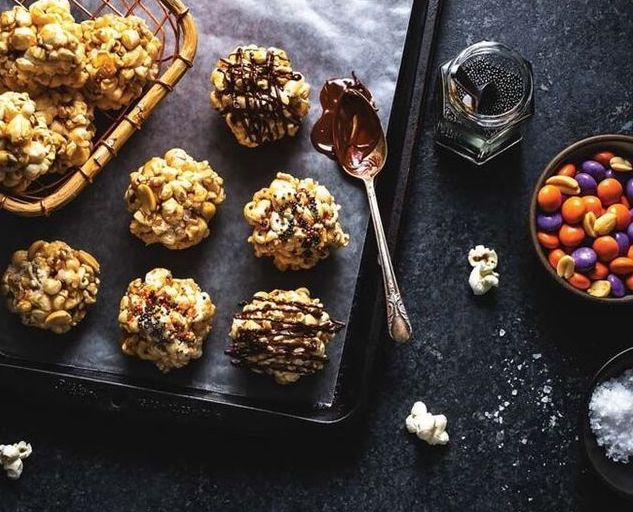 Crunchy, chewy, salty,sweet, and customizable—the humble handmade popcorn ball is a festive fall treat that deserves a comeback. These authentic popcorn balls are made with a mix of sugars (including molasses for an old-fashioned cracker jack taste or agave for a neutral sweetness) boiled into a syrup that gives the corn a glossy exterior with a crisp-chewy bite. Wield your candy thermometer like a wand and you’ll be a popcorn ballin’ wizard in one batch flat.

Generously grease the inside of a big (two-quart) mixing bowl with vegan butter or coconut oil. Line a cookie sheet with parchment paper.

In a three-quart Dutch oven or similar large pot, heat vegetable oil over medium high heat, add popcorn, and cover. Use oven-mitted hands to hold the lid and pop the corn (occasionally shaking the pot). Transfer popped corn to the mixing bowl. If using mix-ins (see right), add them now.

Clip your candy thermometer to the inside of a large, tall saucepan. Add molasses or agave, sugar, water, vinegar, and salt. Bring mixture to a vigorous boil over medium-high heat. When the mixture hits the candy-making “hard-ball stage” (between 250 and 265 degrees F), turn off heat. Stir in the vegan butter or coconut oil and vanilla with a silicon spatula. Pour immediately over the popcorn and use the spatula to vigorously fold the mixture (wear an oven mitt for protection!) till evenly coated.

Let the popcorn mixture cool just enough to handle. Coat your hands with vegan butter or coconut oil and shape the popcorn into 2"– 2½" balls. Place finished balls on the parchment paper. If adding flake salt or sprinkles, sprinkle while still warm.

Try the following variations for a tasty twist:

Chocolate Drizzle: Melt ½ cup dark chocolate chips in a double boiler and stir in 1 Tbsp. coconut oil. For neat and pretty drizzles, scoop mixture into a plastic pastry bag, snip off the tip, and crisscross over popcorn balls.

How To Make Your Own Peanut Butter, Almond Butter, And More