Details
BY BUST Magazine
IN Eat Me
Published: 20 December 2017 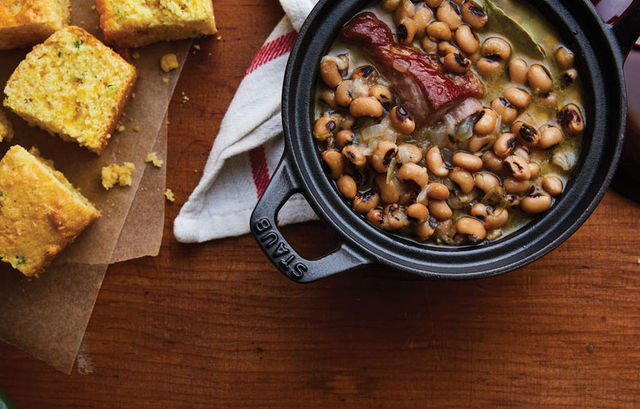 Growing up, a New Year’s good luck dish would have meant, for me, eating dinner at anybody else’s house. I longed for the New Year’s suppers my school pals bragged about—what I had was asparagus out of a can that my mom bought four-for-a-dollar and kosher chicken that she left in the oven for so long it was almost jerky.

Not My Mama’s Buttermilk Cornbread

Preheat your oven to 400 degrees. Grease an 8-inch baking dish with butter or cooking spray. Melt 4 plops of sweet butter. In a bowl, mix up either 2 coffee cups of cornmeal (if you’re gluten free), or one coffee cup of cornmeal and one coffee cup of flour. Add a pinch of baking soda and a pinch of salt. Optional: add a nice big pinch of sugar, too. In another bowl, mix 2 eggs with a coffee cup of buttermilk. Stir in the melted butter. Fold your wet mix into your dry mix and mix well. Pour into your greased dish and bake ‘til the top of your cornbread is golden—about 25 to 30 minutes. Cool for 15 minutes before serving.

Soak 2 pounds of black-eyed peas in cool water overnight. In a deep pot, throw in 1 chopped white onion, 2 smashed garlic cloves, 2 bay leaves, a good pinch of salt, and enough water to fully cover your beans. You can use chicken or vegetable stock instead of water, or you can toss in a smoked ham hock or my favorite, a smoked (cooked) turkey leg. Bring to a boil, then lower to a simmer and cook for one hour. For extra good luck, invite me over!

The Creator Of #MeToo, Tarana Burke, Will Drop The Ball In Times Square This New Year's Eve