Details
BY F Yeah History
IN Eat Me
Published: 18 December 2017

As F Yeah History’s resident baker I’ve been tasked with testing out festive food recipes from across the ages that you can bring to your next Christmas party.  Because why bring a bottle of wine when you can bring a Tudor cocktail and some Victorian mince pies?

You read that right – BUTTER BEER

This drink is from 1588's The Good Huswifes Handmaide for the Kitchen. It’s essentially a caudle, so is designed to both be warming, boozy and medicinal (by Tudor standards…).

First, I took 3 bottles of ale (for those UK-based folk, I used Black Sheep, as it;s nice and dark but is still a blank slate for the upcoming flavors).  Then, I popped it on the hob and put in some ground clove, ginger and nutmeg. While this was bubbling away, I whisked 5 egg yolks with 200g of brown sugar, and then I mixed that with the ale and let it thicken for a bit. 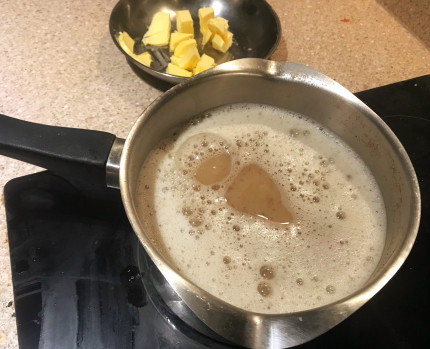 Once it was nice and thick, I took it off the hob and mixed in 100g butter. I repeat: this recipe calls for you to drink butter. Healthy, the Tudors were not.

After getting some nice artery clogging whisked in there, I bought the mix to the boil for 10 mins and then let cool slightly before pouring into glasses: 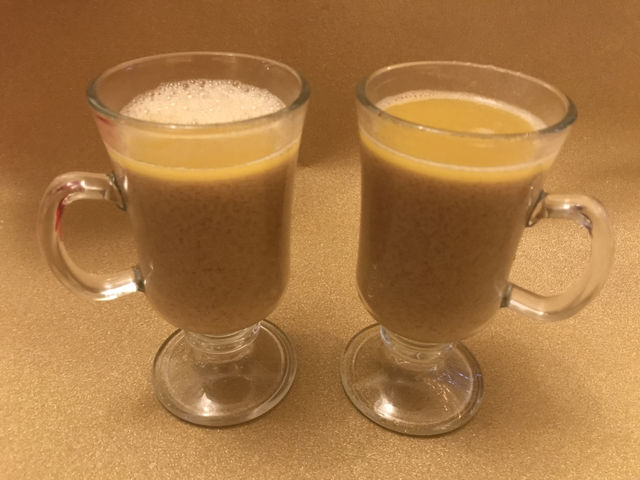 Yep…that is full layer of butter floating on top. If Harry Potter and his pals are having this butter beer with every meal…they’re dead at 15.

HOW DID IT TASTE?

When you get past the butter (by either scooping it out or making sure the beer is always moving), it tastes okay. But not okay enough to take minimum one year off my life with every sip.

A huge thanks to the lovely folks at Hampton Court for giving me this Stuart recipe for booze-soaked sweet pan-fried lamb. This dish comes from John Murrell’s New Booke of Cookerie (1615) and has managed to get all festive food stuffs into one dish. It’s an impressive (if terrifying) combination of sugary sweetness, alcohol, butter and meat. Let's find out if it works!

Take your Legge of Mutton cut into Steakes + put it into a Frying-pan, with a pinte of White-Wine, smoore them somewhat browne: then put them into a Pipkin: Cut a lemmon in slices, and throw it in: then take a good quantity of Butter + hold it over the fire: when it is ready to frie put in a handful of Parsley, and when it is fryed, put it into the Pipkin and boyle all together. This Dish should be garnished with Sinamon, Sugar, and sliced Lemmons.

Okay, so for this recipe I bought lamb steaks (because fuck carving up a mutton leg): 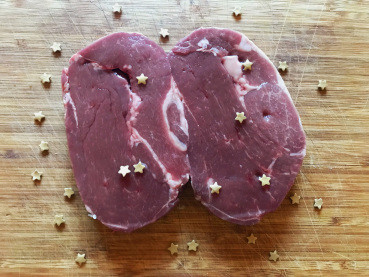 In a feat of festive pique, I’ve tried to make raw meat festive for you…

I tenderized the steaks a bit and then popped a pan on a high heat. When the pan was piping hot, I bunged in the lamb and then poured over a pint of white wine. while the lamb hung out in its booze bath, I poured myself a nice hefty glass of the leftover wine, because we’re only two dishes in and already I want to sit down and have a little cry.

The recipe said to cook the lamb in its wine bath until it’s browned. Now, you guys:

It turns out lamb cooking in white wine smells disgusting.

But I am nothing if not dedicated, so I febreezed the shit out of my kitchen and nursed the lamb until it turned brown, like a good little Stuart cook would.

FINALLY I got to take the lamb out of its wine bath. Then, I refried it with some butter, popped it on a plate and sprinkled over cinnamon and sugar before finally placing some decorative lemon slices around my masterpiece:

SO HOW DID IT TASTE?

Not great…but not awful, it was just a very sad kind of meh.

Considering how artery clogging (and stinky) the final product is, it’s a massive bloody letdown. If you’re giving your heart that much of a kicking, you at least want some flavor to write home about. Oh…it also stank out my house and leaves a really nasty aftertaste that stays for around an hour after eating. Impressive when you factor in how blah the actual taste is.

OUT OF 10 I GIVE A DISH OF STEAKES OF MUTTON, SMOORED IN A FRYING-PANNE: A THOROUGHLY UNDERWHELMING (BUT STANKY) 3/10

Mince pies have been a part of Christmas for yonks; the only difference to today's mince pies? Well, that would be the meat!

For centuries (since the medieval period), sweet was mixed with savoury when it came to pies. During celebrations in particular, pies that were sweetly spiced and meaty were all the rage. The Victorians were no different and today I’ll be using an 1854 recipe from Eliza Acton, a cook for a big stately home in the UK called Audley End.

Her recipe uses ox tongue, but suggests beef as a replacement. As I was making a beef stew anyway (and I’m pretty sure my local Tesco Metro doesn’t stock tongue), I went with beef!

So I slow cooked my beef, then chopped it up into small chunks and set it aside. Next was the main part: Making the rest of the mincemeat.

Now (no surprise) I’m a giant fucking nerd! So every year I use Eliza Acton’s mincemeat recipe to make a huge batch of Victorian style mincemeat (sans actual meat…) to go in my mince pies. This meant I had some ready to go.

I took some of my ready-made mincemeat and mixed in the beef I prepared earlier. 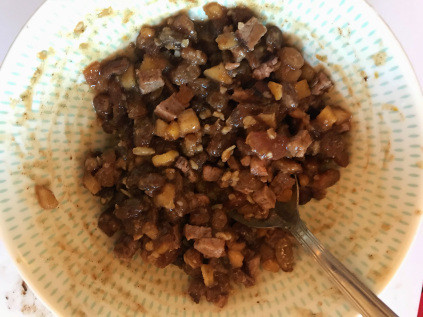 Then I made some simple short crust pastry as suggested in Eliza’s recipe (using lard instead of butter, salt and no sugar because the Victorians love sadness apparently), rolled it out and made it into little pies: 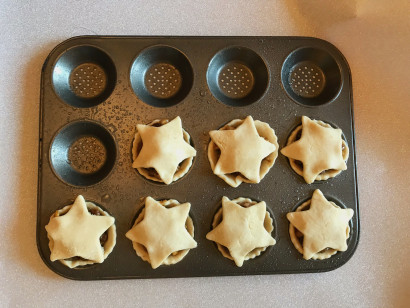 I was going to make 12…but let's be real…nobody is eating 12 of these!

They look good! But…

HOW DID IT TASTE?

Initially okay…and then you got a big ol’ chewy hunk of beef. I didn’t know if this was just me, so I got my boyfriend to taste test this. He spat some out and then proceeded to look very sad for a while after. Not what you want in a festive treat.

Basically, these mince pies are the food equivalent of finding out Father Christmas isn’t real. At first everything is all lovely and cosy and sweet…and then you bite into some secret beef and it’s all wrong; Everything you ever knew and trusted about Christmas is gone.

Anger, sadness, confusion — these mince pies have it all

OUT OF 10 I GIVE VICTORIAN MINCE PIES: 4/10 BECAUSE THE MINCEMEAT (SANS MEAT) IS GREAT… BUT MANY POINTS DEDUCTED FOR BEING A DECEITFUL DESSERT.

Now I know what your thinking. These historic Christmas dishes have all been great, but what historic festive goodies do I take to a holiday party full of health nuts? Don’t worry, I got you!

In the 50s and 60s, companies regularly advertised their products with handy recipe guides. It’s a festive edition of one of these guides, by cranberry sauce company, Ocean Spray, that this next recipe comes from:

Now, the first thing I did to prepare this salad was making some gelatin (standard salad practice). Once my gelatin mixture was nice and semi-set, I mixed in some chopped pineapple, oranges and of course a hefty lump of cranberry sauce. Then I left it to set for several hours. 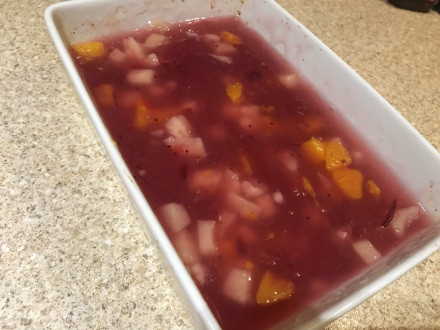 Half a day later, this monstrosity lovely fruit jelly was waiting for me. Now, I know what you're thinking. This doesn’t look like a salad, it’s not going to fly with my healthy friends. Well, check this out:

Yeah, that plate is quite literally dripping with jellied health.

So we have leaves and lovely emulsified fruit things, its all looking great, except for one thing…it just isn’t festive! But don’t worry, the good folks at Ocean Spray thought about that and suggest that you top off your salad with a wonderful cream cheese Christmas bow. 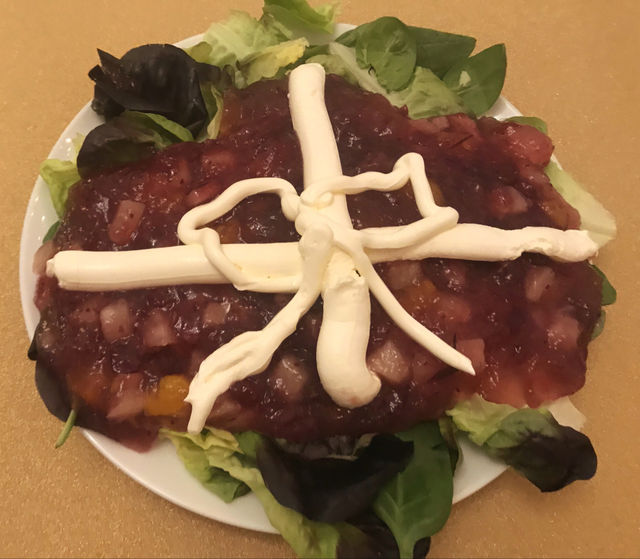 This is the best cheese piping work you will ever see!

The best thing about this is that it doubles up as a both a Christmas present-shaped salad AND a salad that sort of looks like a really sad elephant. That, my friends, is multitasking.

SO HOW DID IT TASTE?

You know what…it tasted fine. It tasted like cranberry jelly with fruit in, which is good, because thats basically what it was. Admittedly I did scrape the cream cheese Christmas bow off, but bar that, fine.

OUT OF 10 I GIVE JELLIED CRANBERRY SALAD: 7/10: IT’S THE PERFECT HOLIDAY DISH TO GIVE TO PEOPLE YOU HATE.

I Created Four Historical Lipsticks  — Here's How Well They Worked