A Fennel And Apple Salad Recipe Perfect For Thanksgiving

Details
BY BUST Magazine
IN Eat Me
Published: 15 November 2017 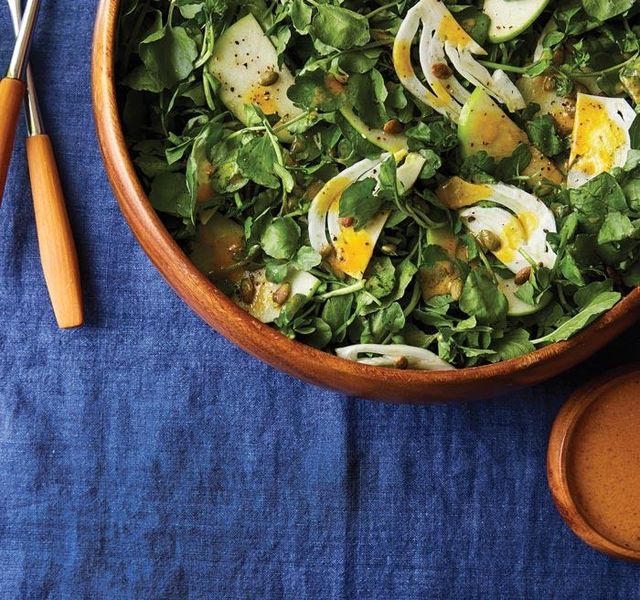 When it comes to cooking for Thanksgiving, everyone has a few “must-haves”—the stuffing served every year you’ve been alive, your aunt’s green bean casserole, or even the spinach tofu lasagna you introduced to your family. This holiday, stick to your tried and trues, but get fresh with a dish that offers a much-needed palate cleanser: a salad! Not the standard leafy greens and bottled dressing kind. This delicate dish features mellow fennel, sweet-tart apple, and spicy watercress: a cool, crisp, and refreshing blend next to all that rich, heavy food. Don’t worry, it’s still fall-appropriate with a double-pumpkin explosion of gingery pumpkin vinaigrette and toasted pepitas.

Pumpkin-Dressed Fennel Apple Salad
Serves 4–6, as a side

1. Make the dressing: In a blender or food processor, pulse together all of the ingredients until smooth. Cover and chill until ready to use.

2. With a mandoline**, shave the fennel into long strips. Slice the apple in quarters, remove core, and shave on the mandoline. In a bowl, toss the fennel and apple with lemon juice to prevent browning.

3. In a large serving bowl, toss watercress with a splash of pumpkin dressing. Add the shaved fennel and apple, a dollop more of dressing, and gently toss to coat. Sprinkle with toasted pepitas and serve immediately, passing around the remaining dressing.

* Toast pepitas in a skillet over medium heat. Stir frequently until seeds are puffed and lightly browned (some will even pop!) then cool on a dish.

** The secret to making this salad in minutes: a petite Japanese mandoline. It’s lightweight, inexpensive, and infinitely more user friendly than a traditional French mandoline. Yet still sharp as the dickens, so use with care!

How To Make Hummus At Home

12 Vegan Mac And Cheese Recipes To Eat All Year Round

2 Poke Recipes To Spice Up Your Cuisine