Details
BY BUST Magazine
IN Eat Me
Published: 13 November 2015 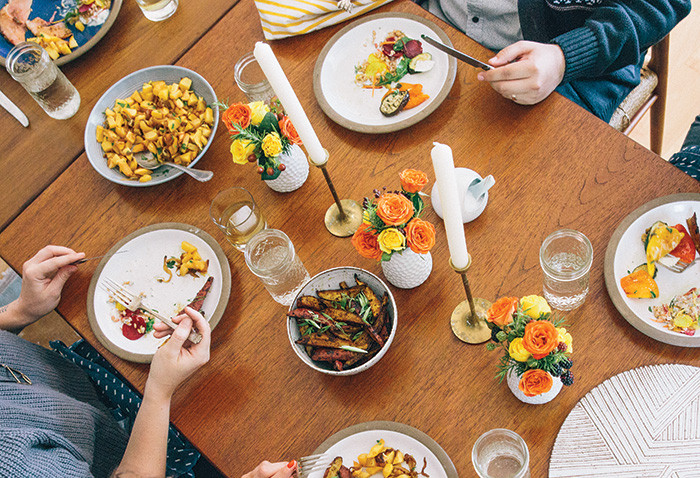 Take a time out from the turkey this year, and instead host a Thanksgiving dinner with a menu inspired by your favorite feminist icons

We all know that today’s interpretation of the first Thanksgiving is kind of a sham—we’re pretty sure there was no congenial corn-cob sharing between the colonizing pilgrims and the Native Americans they persecuted. But don’t get us wrong, we love this holiday! Who doesn’t want to gather their friends and loved ones, eat kickass food like it’s going out of style, and take a moment to be thankful for all that we have? So rather than honor a mythologized harvest of centuries past, why not give thanks to the women who helped get us to where we are, and the ones who are leading us to where we’re going, with T-Day dishes honoring heroes of feminism, past and present. 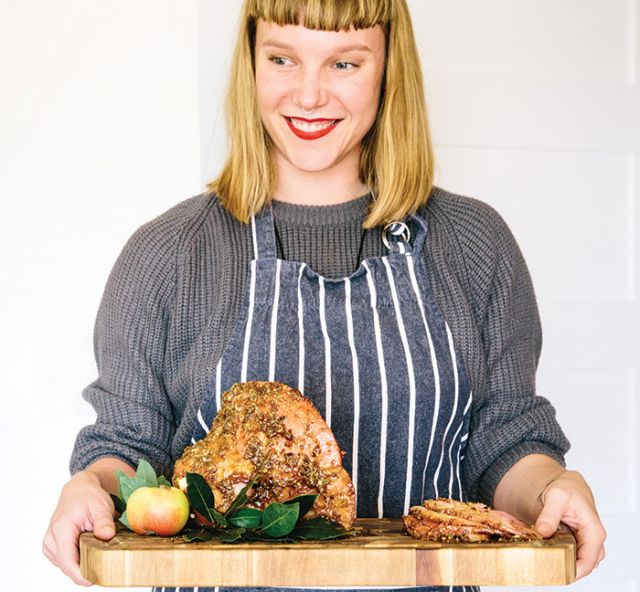 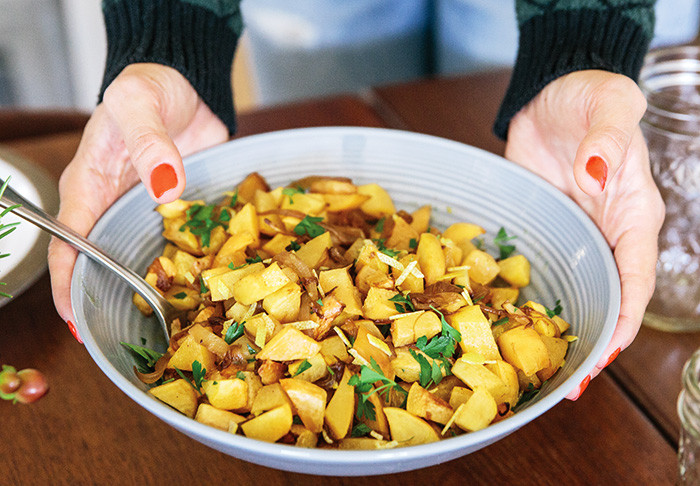 Like Supreme Court Justice Ruth Bader Ginsburg herself, this dish is a reliable, no-nonsense side that will always have your  back. The simple preparation lets the root veggie’s true taste shine, giving it equal justice under the laws of flavor, something the Notorious RBG would surely support.

Preheat oven to 425 degrees F. Melt 4 tablespoons of butter in a small skillet or microwave. Toss rutabaga with melted butter, salt, and black pepper. Spread onto a baking sheet and roast until tender and golden, about 20 to 30 minutes.

While the rutabagas are roasting, make brown butter by melting the remaining 8 tablespoons of butter in a small skillet over medium heat. Swirl the pan occasionally to make sure butter cooks evenly. When the butter starts to foam—it turns a dark golden color, and gives off a nutty aroma, after about 10 minutes—remove from heat and set aside.

Caramelize the onions using a heavy-bottomed sauté pan coated with olive oil. Cook onions over medium high heat, stirring occasionally until golden and translucent. Reduce heat to low and keep stirring for about 30 minutes, or until the onions are a deep caramel color. If you notice the onions drying out, add a little bit of water to the pan.

Toss the rutabagas with browned butter, then add the caramelized onions, lemon zest, and chopped parsley. Season with salt and pepper, and serve. 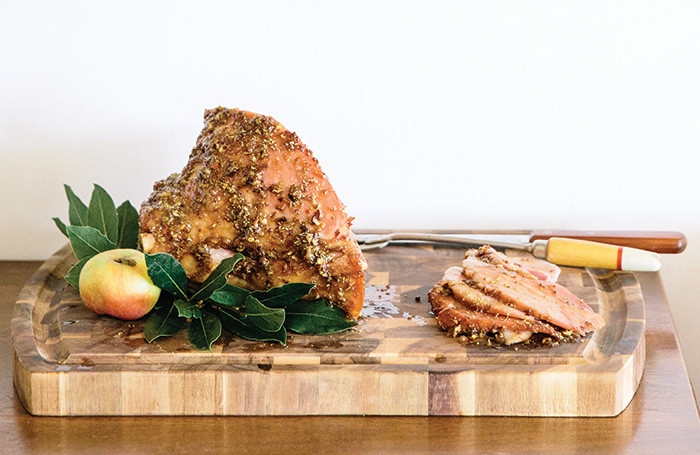 It’s fitting that our meal’s main dish honors the main dish of second-wave feminism: Gloria Steinem. The Ms. Magazine founder became the face of women’s lib in the ’70s, and now in her 80s she’s never backed down. This ham’s marinade has a rich flavor, and the red pepper flakes give it a hint of heat, just enough to light your feminist fire.

Preheat oven to 250 degrees F. Remove ham from its wrapping and drain all its juices. Place in a roasting pan on its flat end and using a paring knife, score the fat into a cross-hatch pattern starting from the flat end up to the shank end. Tent the ham with foil, making sure the ham and foil do not touch, and crimp the foil to the roasting pan. Roast for 2 to 3 hours or until the center of the ham reads 110 degrees F on a meat thermometer.

While ham is roasting, mix brown sugar, fennel seeds, red pepper flakes, minced garlic, and black pepper in a small bowl. When the ham is cool to the touch, remove the fat from the ham; it should come off easily. Raise the heat to 350 degrees F.

Using a pastry brush, brush the mustard over the ham’s exterior. Then, using your fingers, take the brown sugar mixture and pack it onto the ham, covering as much of it as possible. Place the ham back in the oven and roast until the internal temperature is 130 degrees F, about 20 to 30 minutes. Let the ham rest for 10 minutes and sprinkle generously with fennel pollen. Slice and serve. 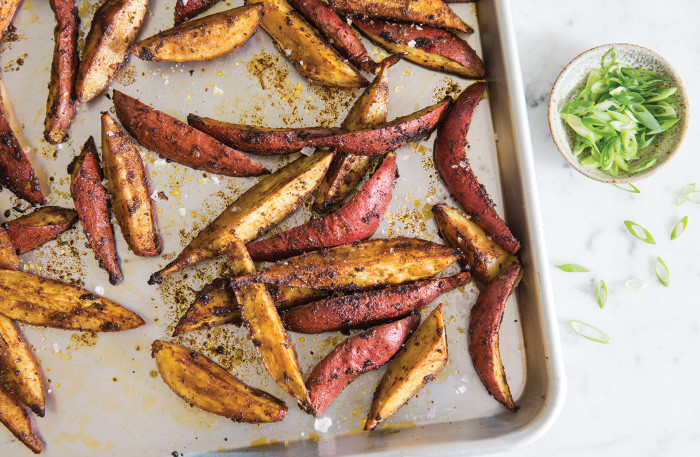 O.G. feminist Elizabeth Cady Stanton is often credited for launching the female suffrage movement at the Seneca Falls Convention in 1848. Raise a sweet potato in her honor and make sure you’re registered to vote.

Preheat oven to 425 degrees F. Wash and quarter sweet potatoes lengthwise and set aside. Mix together vegetable oil, harissa paste, and honey until well combined. Toss the harissa mixture with potatoes, and add salt and pepper. Place on a baking sheet and roast for 20 minutes or until tender. Top with scallions and add more salt and pepper, if needed. 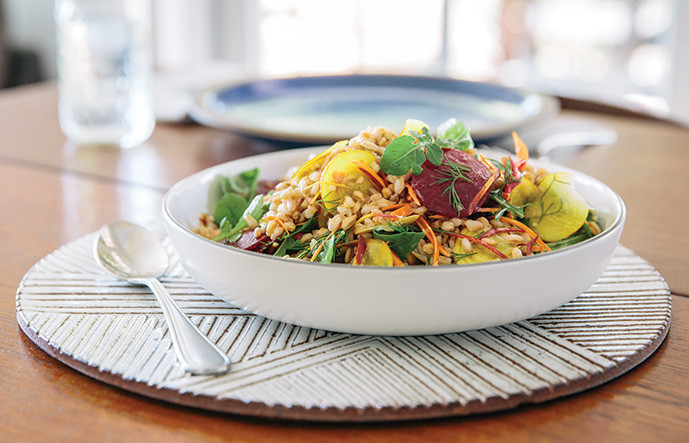 One of Elizabeth Cady Stanton’s partners in activism was Susan B. Anthony, another driving force behind the women’s suffrage movement. The two also launched feminist newspaper The Revolution in 1868; this beet-heavy farro salad is like a revolution for your mouth.

Toast coriander in a small skillet over medium high heat; let cool. Using a mortar and pestle (or plastic bag and a heavy object), crush coriander. Fold it, along with cucumber and parsley, into the yogurt. Add salt and pepper to taste. Set aside. In a large bowl, whisk Dijon mustard, sherry vinegar, and olive oil; add shallot. Combine farro, dill, beets, and carrots with vinaigrette and mix until well coated. Add arugula and gently toss. Salt and pepper to taste. To serve, spread a layer of the yogurt mixture onto a plate (or platter, if you want to serve family style). Top with farro mixture. Garnish with extra dill and parsley, if desired. 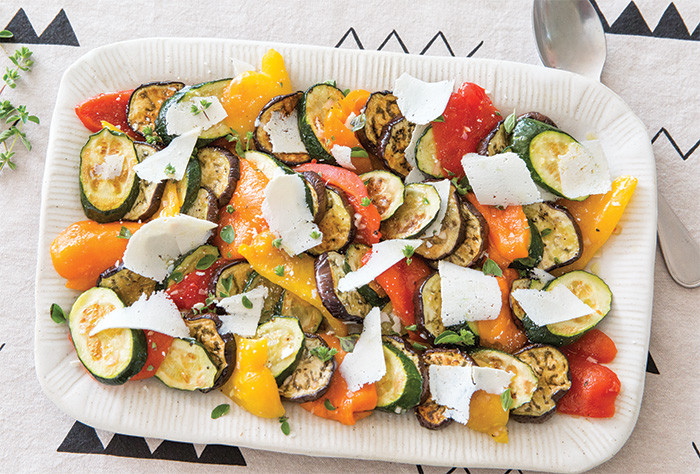 "Being oppressed is the absence of choices," bell hooks once wrote, so this dish that pays homage to the contemporary feminist writer offers plenty of options when it comes to delicious veggies.

Preheat oven to 425 degrees F. Place bell peppers over an open flame on high heat, turning every 2 to 3 minutes until charred. Place charred bell peppers in a large bowl and cover with a towel or plate (this will make it easier to peel the skin). Once cooled, peel the peppers’ skin. Remove stem, seeds, and ribs from each and slice into 2" strips. Place strips back into bowl and add sherry vinegar, garlic, shallot, and oil. Let the peppers marinate for at least 15 minutes.

Meanwhile, toss the eggplant and zucchini with oil and salt and pepper. Place on a baking sheet and roast for 15 to 20 minutes. Transfer eggplant to a platter, layer with zucchini and marinated peppers. Top with ricotta salata shavings and oregano. 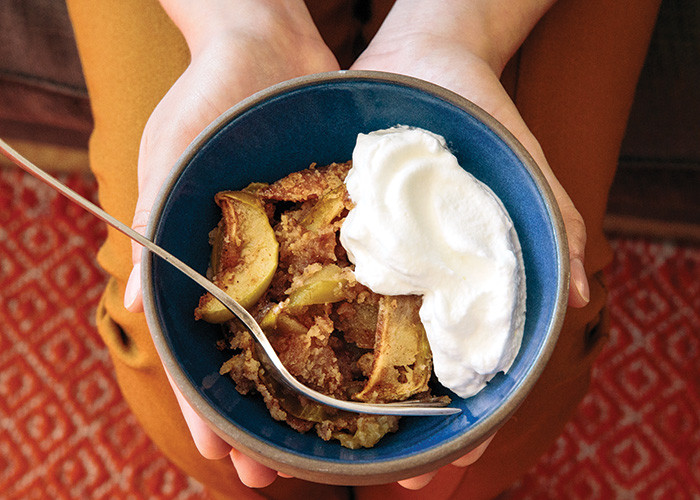 It’s no mystery that Betty Friedan’s The Feminine Mystique blew the lid off the “happy homemaker” myth and pretty much launched the second wave of women’s lib. The NOW and NARAL co-founder is the apple of our feminist eye, so this ooey-gooey, crumble-like dessert filled with sliced Granny Smiths seems extra appropriate.

Preheat oven to 350 degrees F. Grease an 8" x 8" baking dish. Spread cubed bread onto a baking sheet and toast for 8 to 10 minutes until dry. Pulse through a food processor until coarse. Layer ¹/³ of the crumbs into the greased baking dish.

In a small bowl, combine sugar, spices, salt, and zest of lemon; set aside. In another bowl, combine lemon juice, vanilla, and apples. Spread half of the apples on top of the breadcrumbs and pour ¼ cup of apple brandy (or apple juice) evenly over the apples. Layer another third of crumbs and the remaining apples and apple brandy (or juice). Cover with the remaining crumbs. Dot the top of the crumb mixture with the butter.

Bake the brown betty for about an hour, or until the liquid starts bubbling and the crust starts to brown. Cover with foil and bake for another 15 minutes. Cool and serve with freshly whipped cream. 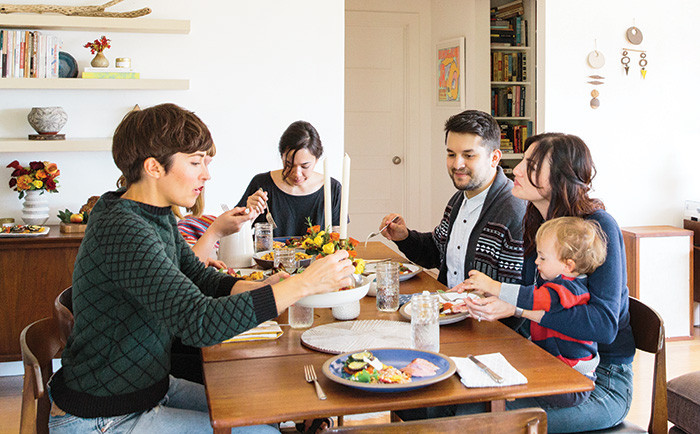 Want to fill your feast with even more  feminist-inspired dishes? Here are some to get your cook’s creativity flowing: 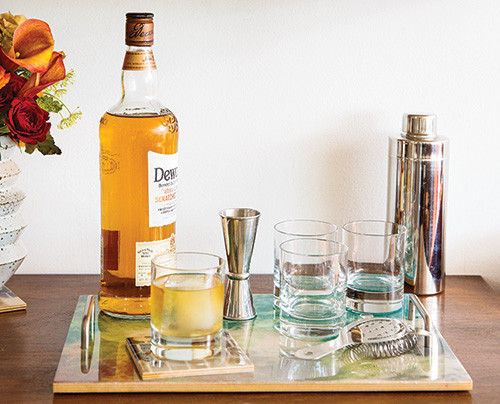