How To Make The Ultimate DIY Haunted House For Halloween 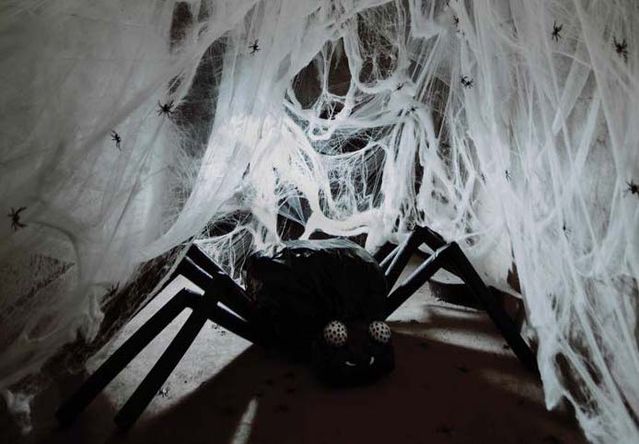 Every Halloween fanatic dreams of creating their own haunted house, but the concept can seem a little overwhelming. Don’t stress yourself to death—we have some simple tricks that will have you murdering the fright game.

1. Let everyone know when your haunted house will be open. You may want to put a sign out or set up a Facebook event listing the dates and times, so that ghouls and goblins know when to come by.

2. Decide if you want to charge for entry. This is a great opportunity to raise some money for your favorite charity, so you can stop something really scary from happening—like losing access to abortion.

3. Decide if you want a house theme like creepy clowns or zombies, or if you’d prefer to set up separate, spooky “rooms.”

4. Create a budget. Most of the items here can be made for cheap, but if you want to get props or animatronics from a Halloween store, that can add up fast.

5. Keep your visitors safe. Warn visitors with a sign at the entrance if you plan to have actors touch them, or if you’re using strobes or flashing lights that could put those susceptible to seizures at risk.

6. Recruit a few (or more) friends to help out as actors—they’ll be wearing costumes and acting out scares. We dressed up our actors as a butcher, the butcher’s victim, and a vampire inspired by Queen of the Damned.

Setting Up Your Haunted House

In a large, open area like a basement, garage, yard, or warehouse, lay out a route by hanging black fabric from the ceiling to create a walkway (you can use objects like crates if you set up in an outdoor area). Decide whether you want your visitors to walk through in groups, pairs, or alone—if you’re doing groups, you will need to make the walkway wider. Start with a wide entrance space and create a narrow “hall,” because moving from a larger space to a smaller one instantly makes people feel uncomfortable.

Set up the route to go through two or three “rooms,” which, like your “hallway,” you can create by using curtains, crates, or any other vision-obscuring objects to block off a space. Connect your “rooms” with additional “hallways,” creating twists and turns and incorporating creepy decor like chains or netting. Play off the existing features in the area you are decorating: if you have dingy creepy, corners, make them even creepier. If you have super high ceilings, use a pulley to surprise visitors with a sudden object dropped down from above. Hide household objects that aren’t haunted-house-worthy, as they will take the participant out of the moment and break the scare—if you can’t move them, cover them up with black fabric, or incorporate them, like having a bloody hand dropping out of your freezer. If you’d like, add fog machines, strobes, or flickering lights to up the fright in any section of the space. (You can get simple fog machines for as low as $40 online at places like spirithalloween.com.) These will set the perfect atmosphere for a monster that wasn’t there before to pop up in the room.

You’re going to want to plan plenty of jump scares (when something happens seemingly out of nowhere and shocks you) along the route. Ideally, people will literally jump back, so plan extra space when decorating—you don’t want them to knock over a wall of decapitated heads in jars! Have at least one strong jump scare, where a character jumps out from behind a curtain or a dark corner. You can also plan a camouflage scare, which is when an actor blends in with the scenery so people don’t notice them at first—and then the actor slowly reveals themself. You want to throw people off, so plan your scares so visitors get a couple in a row and think they are done—and then, BAM!, another sneak attack.

If you’d like, you can have your characters talk to the audience, or you can have the actors remain silent—or just scream, moan, and make other creepy noises. You can choose to have the guests escorted through, or walk at their own pace. Whichever method you go with, be sure to do practice walkthroughs so all your actors can get their timing right. Depending on your plan, you may want to set up signals to warn the next actor to get ready. Have someone flash a light when a visitor is turning a corner or heading to a new room, or have an actor scream to alert the next actor that it’s showtime. 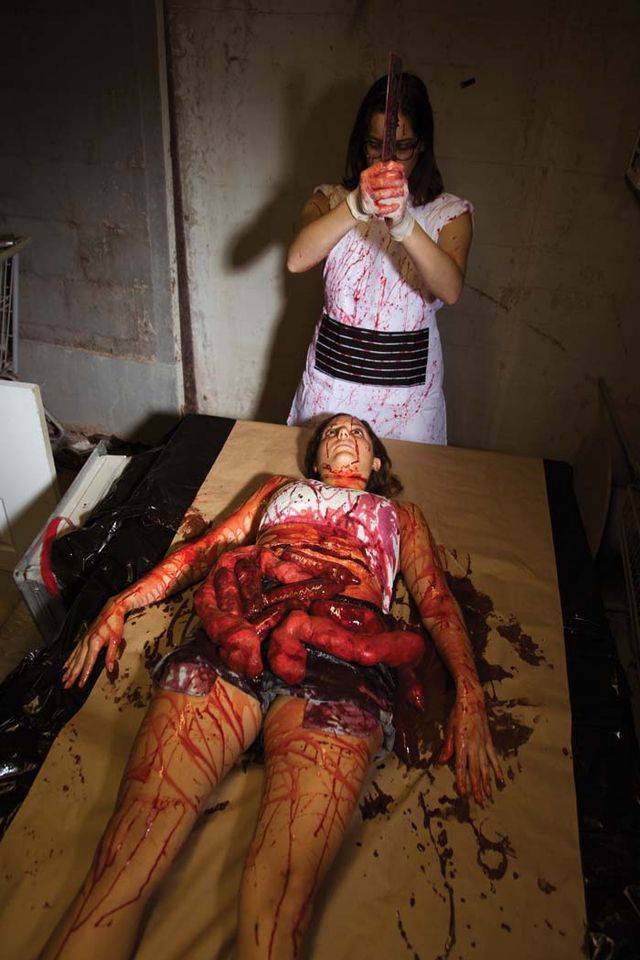 Next, use tweezers to pick up a small part of the latex and tissue, being very careful to not prick the skin. Using small nail scissors, carefully cut a jagged line down the middle of the liquid latex and tissue. Make sure to leave the edges intact. Your wound is almost complete! Using cream makeup, apply the red inside of the open wound. Then, use black inside the wound near the edges to create depth. Once you’re happy with how your wound looks, add some fake blood inside and outside. You now have a wound!

To make one gallon of fake blood, take 16 cups of Johnson’s Baby Shampoo (the orange color) and add 2 ½ Tbs. of red food coloring, mixing thoroughly. Slowly add drops of blue food coloring, mixing thoroughly after each drop until you get the desired hue—if you get too blue, add more red. Do a test drop on your hand; it should wash off completely, leaving no stick or stain. If the drop leaves a red spot, add more baby shampoo to dilute the mixture.

We made both versions of intestines and combined them, but you can stick to one version if you want.

Simple and Cheap Intestines: Use scissors to cut the legs off of two pairs of nude stockings. Crumble up red tissue paper and lightly stuff the stockings; they should still be loose. Tie the ends off and trim off the hose after the knot. About an hour before showtime, soak the “intestines” in a bucket of fake blood.

To lay the intestines down, snake the pantyhose guts in a shape you like, and/or lay the condom guts next to each other in a pile so that the tips do not show. Whichever version you use, pour a liberal amount of fake blood over them. 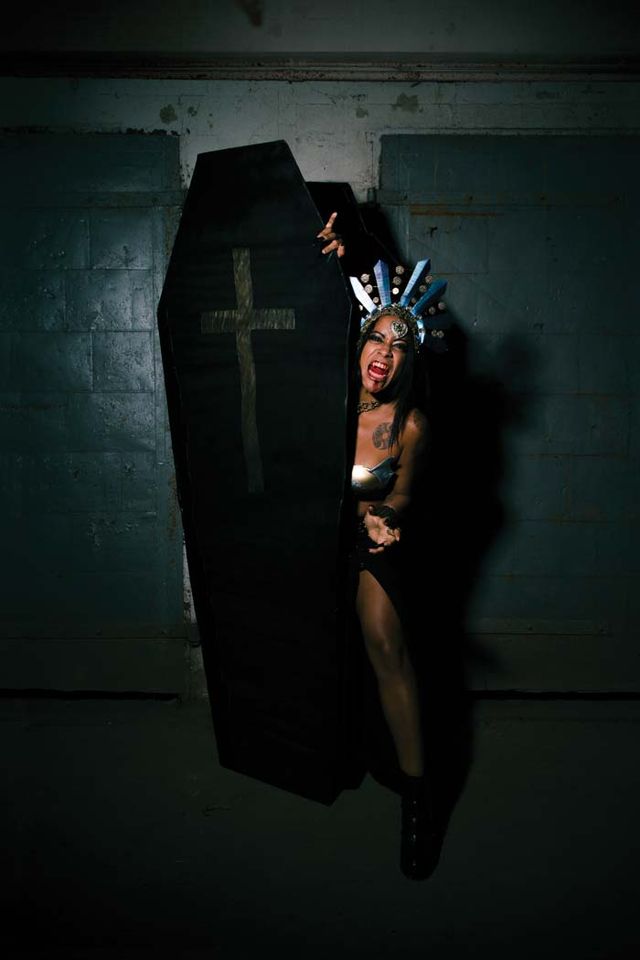 Use a utility knife to cut out eight pieces of cardboard as follows: 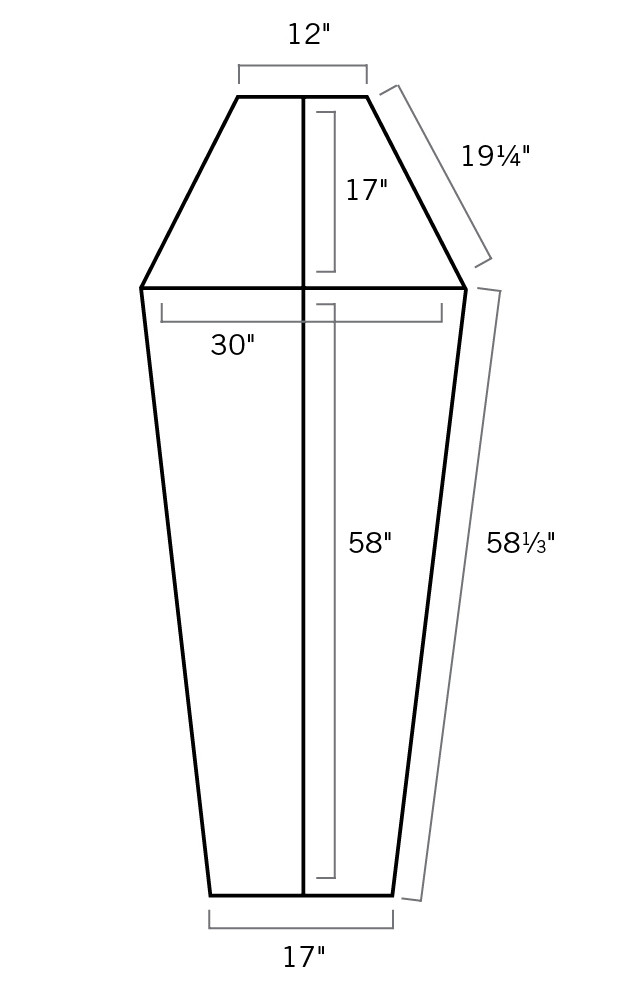 • For the lid and the base of the coffin, cut out two pieces that are 75" long (you may need to tape some pieces of cardboard together to get this length; reinforce any gaps with black Gorilla Tape), 12" wide at the top, 30" at the widest part (17" down from the top), and 17" wide at the bottom.

1. To assemble the coffin, have a friend help you hold each piece flush against the corresponding edge of the coffin base, and tape the pieces together using Gorilla Tape. After the top, bottom, and all four edge pieces are attached, connect them to each other at the corners with more Gorilla Tape. Reinforce any bends in the cardboard by taping a smaller piece of cardboard over the bend on the “inside” of the coffin.

2. Cover the lid of the coffin in craft paper to hide any seams, making the outside-facing edge as smooth as possible. Lay craft paper over the lid and cut out a second coffin-shaped paper, ¼" smaller than your lid on all sides, to fit inside. Turn your coffin base on its side and lay the coffin lid next to it so the smoothly-wrapped side is facing down. Attach the lid by using Gorilla Tape strips to make “hinges” going all the way down the lower side of the coffin.

3. Affix the craft paper template to the inside of the coffin, then spray the entire coffin with black spray paint and use gold spray paint to paint a cross on the lid. Stand the coffin up and reinforce with tape in any places needed.

4. When complete, lay the coffin on the ground and fill it with crates, boxes, or any other large, light materials to keep the lid from folding in until you are ready to use. 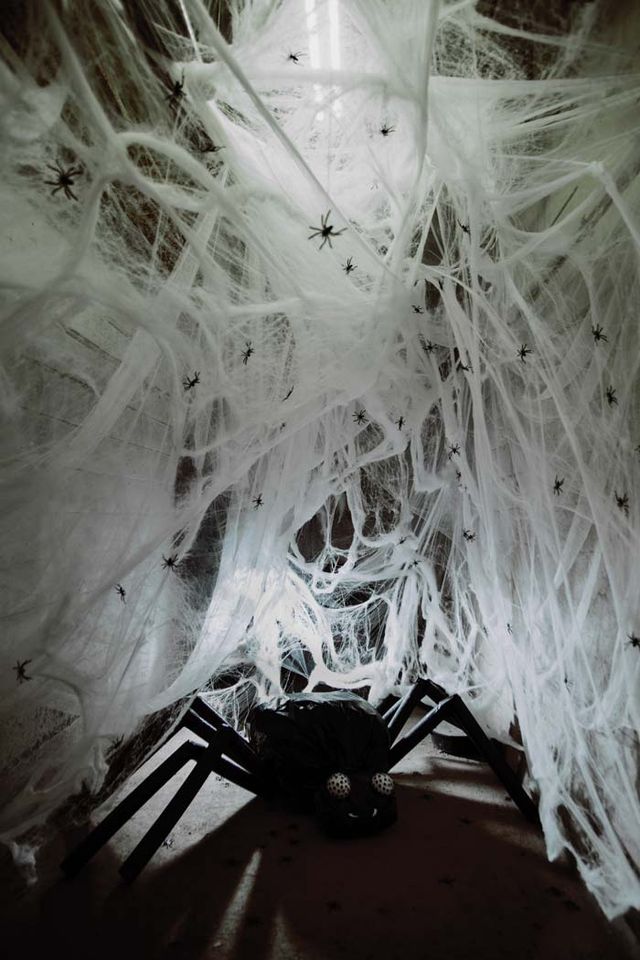 For the body, turn a large black trash bag inside-out, tape the bottom corners in to make it more rounded, and flip it back right-side out. Stuff the bag with whatever you have on hand (like old newspapers), and tie it closed. For the head, do the same with a black deli bag (or smaller trash bag). For the legs, get two 4-packs of ¾" x 3' tubular pipe insulation from a home improvement supply store like Home Depot. Use a utility knife to cut each tube in half, and use black Gorilla Tape to secure the halves together at a 90-degree angle. Flip the trash bag with the least rounded side up and tape the bended tubes to the bag so the bends face up and you have two rows with four tubes on each side. For the eyes, cut a 2.5" Styrofoam ball in half with a utility knife and hot glue ½" googly eyes onto each curved side. Flip the trash bag over and position the legs as you want them. Tape the head to the spider body near the front and towards the bottom. Tape the eyes to the front of the head using folded-over pieces of tape. Cut two slightly curved fangs out of white poster board; make sure they curve in opposite directions so that they curve towards each other on the spider. Fold the straight edge of the fang down about a ¼", creating tabs, and use small pieces of tape to attach them to the head.

Cover a small hallway in “spiderwebs” using a white mosquito-net bed canopy (you can get these at a home decor store like IKEA) hung from the ceiling. Spread several bags of fake cobwebs (from Amazon or a party supply store) across the walls/ceiling and the netting; it took us about three bags to fill this space. Place the large spider in the back corner and attach small plastic black spiders to the webs (they should stick to them easily), scattering a few on the ground near the large spider. 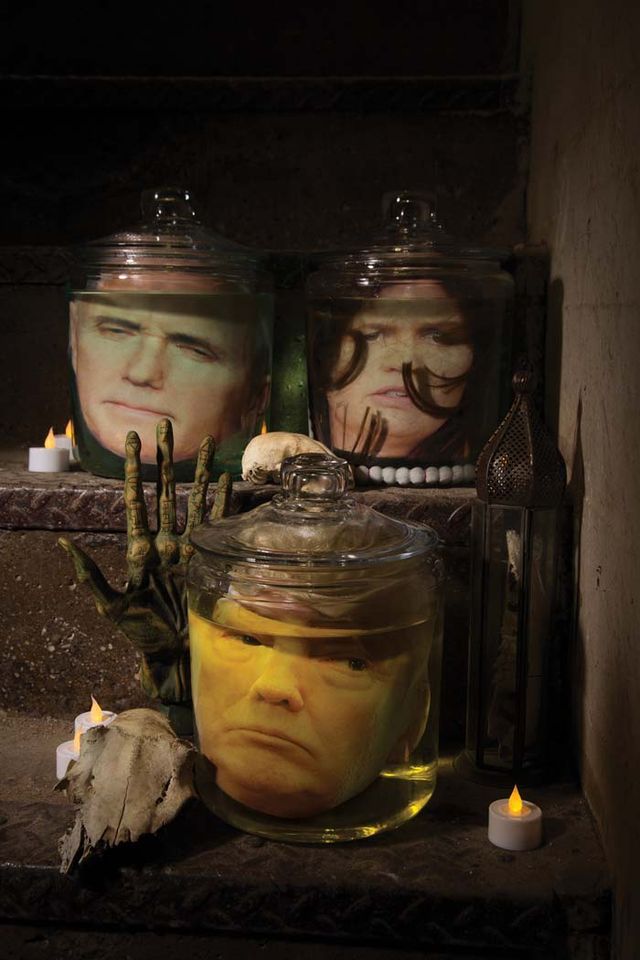 For each head, you’ll need a one-gallon glass jar with a lid. Find a clear, forward-facing image of a person’s head. In an image-editing program, resize the head to be 7" tall without the neck. Stretch the image by 20%. Print out a color image of the head, cut the neck off, and trim around the head. Place the head in the jar to see if it fits; you may need to trim off part of the top of the head to get the lid to fit. Laminate the head (you can get this done cheap at an office supply store like Staples) and trim extra lamination. Place the head in the jar, pressing it up to the glass, and fill the jar with water. Add green and/or yellow food coloring until you get the shade you want. Feel free to add some dirt, wig hair, or other items to make it seem creepier—we added some pearls to our Sarah Huckabee Sanders jar. Put the lid on and sit the jar on a shelf at eye level.