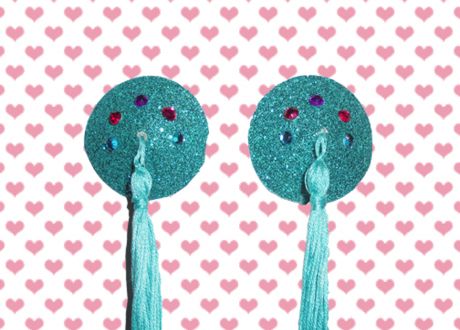 With the Philly Naked Bike Ride and fall’s SlutWalk Providence quickly approaching, I needed something glitzy to complete my event attire - or non-attire. Yeah, yeah, it’s called the "Naked" Bike Ride, but it’s also an opportunity to wear nipple tassels and pasties and prance around in public. Since I don’t have the funds for the fancy stuff (like these babies from Agent Provocateur), I rolled up my sleeves and crafted my own no-sew nipple tassels. They’re easy to make, and your wallet won't go running for the toilet. They’re not as heavy duty as felt or cloth pasties, but they’ll definitely spice your girls up for the day’s event. And when you’re done with them, you can turn them into awesome party hats for your niece’s American Girl doll.

Just kidding. Don’t do that.

*Paper about the thickness of card stock (You don’t want it to be too thin, but you also want to be able to cut it with scissors or an Xacto knife. I used a pre-glittered paper that I found in the card-making section at Michael’s)

OR
*Foam paper/'fun foam', available at craft stores (as suggested by readers!)
*Scissors or an Xacto knife
*A compass, or anything that will help you draw a circle
*Ruler
*Glue (I love Aleene’s Original Tacky Glue. You can also use double-stick tape, but it might not hold as well)
*About two packets of embroidery floss (optional, for homemade tassels)
*Pre-made tassels, glitter, rhinestones, ribbons, etc.

1.) Measure the distance from the outside of your areola to the center of your nipple. Add about a centimeter or so, and this will be the measurement you want to set your compass to. Just make sure the circle will be large enough to cover the areola, will a little extra room for when you form the shapes. 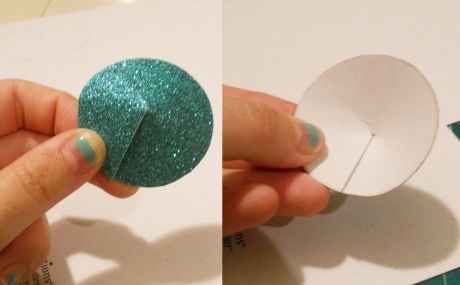 2.) Using the compass, draw two circles on the paper. (Draw on the back if you have pre-decorated paper.) Mark the center (where the needle was) with a pencil, and draw a line from the center to the perimeter of the circle.

3.) Cut the circles out as neatly as possible. If you're not using pre-decorated paper, this is a good time to glue down fabrics or materials. If you're glittering the pasties yourself, it's better to decorate after you make the cone shapes. 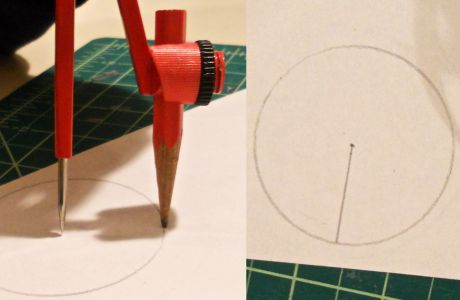 4.) Cut along the slit that you drew earlier. Take one flap and bring it over the other, creating a cone shape. Make sure it’s not too flat. You can make them as pointy as you’d like - just be aware of the change in diameter. 5.) Apply glue on the edge of one of the flaps, and press down. You might want to hold it between your fingers or use a clip while the glue sets. Let it completely dry for about 15~20 minutes. You can trim the edges to neaten them up. 6.) Decorate the surface with rhinestones, lace, whatever your little heart desires. If you’re happy with the pasties, you’re done! To adjust the comfort level, try adding a layer of fabric, felt, or foam on the inside.7.) If you want to add a little swing to your creations, hold off on adding the inner layer. Poke a hole through the tip of the pasties using an awl or the needle side of your compass. Be careful not to be too forceful. 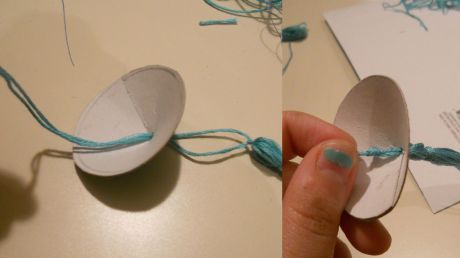 8.) I made my tassels using embroidery floss and vaguely followed these instructions from Sew4Home. You can also use store-bought tassels. Take the ‘tie’ end of the tassel, and string it/hook it through the front of the pasty.

9.) Adjust the tassel until it hangs just right, then tie a double knot in the back. Pull to the front, and trim the excess. A little dab of glue will keep the knot intact. I also used a little glue on the tassels to make sure they stayed together. 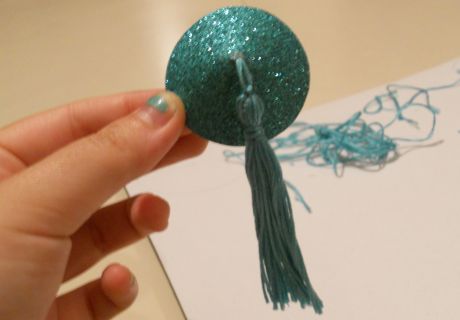 10.) You’re done! Put on your DIY nipple tassels with double-stick fashion/skin tape, eye lash glue (you can remove it with eye makeup remover later), or an adhesive of choice. 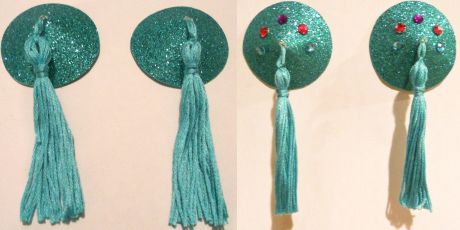 Cara Delevingne On Caitlyn Jenner And Her Relationship With St. Vincent

Tags: project , pasties , nipple tassels , for fun , easy , DIY , Crafts
Support Feminist Media!
During these troubling political times, independent feminist media is more vital than ever. If our bold, uncensored reporting on women’s issues is important to you, please consider making a donation of $5, $25, $50, or whatever you can afford, to protect and sustain BUST.com.
Thanks so much—we can’t spell BUST without U.