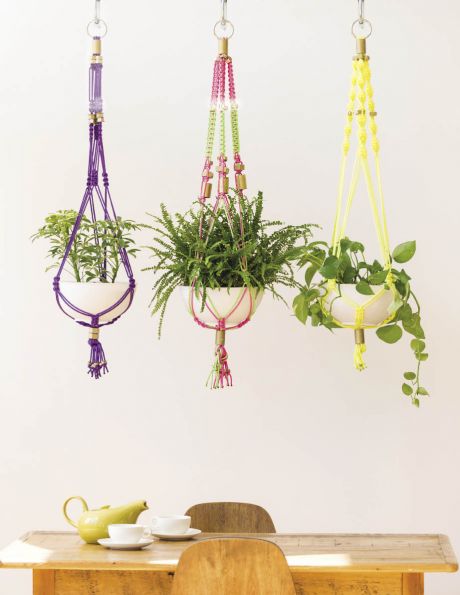 Macramé has been associated with all sorts of unsavory ’70s grossness in the past, but lately it has come back into vogue with a vengeance. Not just the product of too much time (and weed) on your hands, macramé is a rad, relaxing activity, and this plant hanger is a perfect way to show off the craft. The modern way to macramé is by using neon cords instead of earth-toned yarn, and by accenting it with hex nuts and washers, instead of wooden beads. The result makes a great gift, or the perfect home accessory to jazz up your place

1. Spray paint your hex nuts and other hardware (as well as your plant pot) the desired color.

2. Cut 8 pieces of equal-length cord in either one or two colors—ours were 12' long—and burn the ends with a lighter to keep them from fraying. Slide your steel D or O ring halfway up the cords, fold the cords in half, and thread all 16 ends through the PVC pipe. Hook your steel ring onto something to keep it steady for knotting.

3. To create the flat bands at the top of our pink and green hanger, make a series of square knots using four strands, as follows: 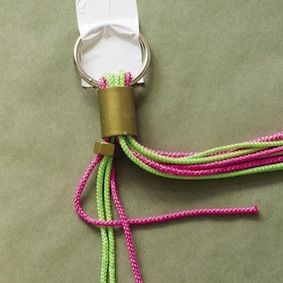 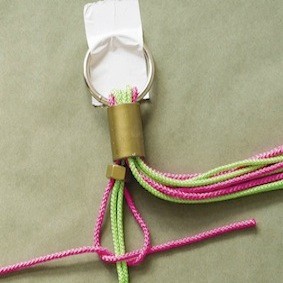 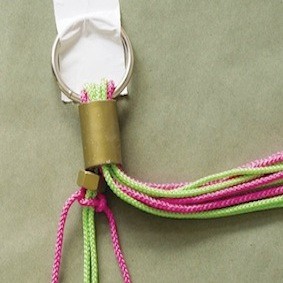 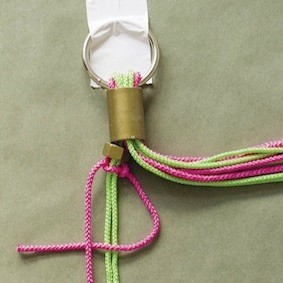 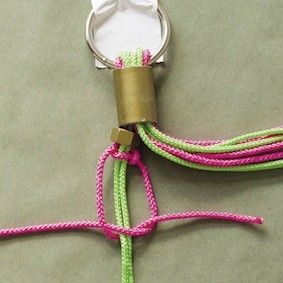 4. Repeat step 3 until the flat band is as long as you want it to be.

5. As you work, the outer cords will become shorter while the center cords remain the same length. To even things out, after you’ve worked a number of square knots, slide the outer two cords through a 1/2" inch hex nut so that they become the middle cords [F], then continue creating the bands, adding hex nuts and other hardware where you like. 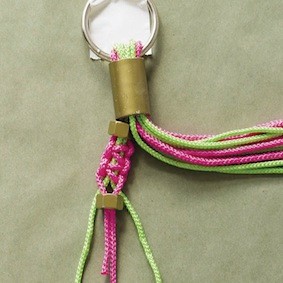 6. Working in groups of 4, repeat this process on the remaining 12 cords [G]. 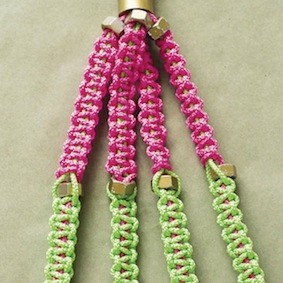 7. To create the spiral bands [H] you see in our yellow hanger (called half-knot twists), follow the same directions as above, but instead of repeating all of step 3, just repeat parts [A] through [C] over and over again. 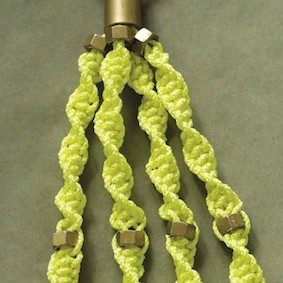 8. To create a base to hold your pot, split each group of four cords into two pairs. Then group each pair with one from the neighboring group of four, to create new groups of four—clip these together with clothespins. Make three to four square knots below the clothespins [I]. 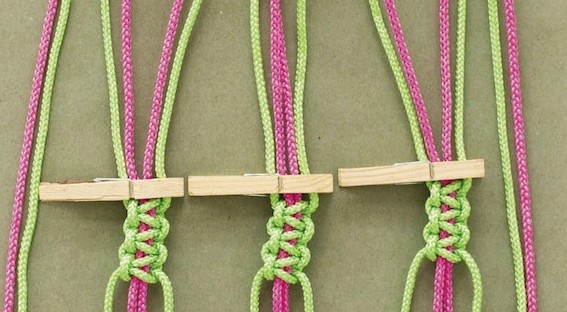 9. Reposition your cords again so that they return to their original four-cord set, and clip these groups of four cords together [J]. Make three or four square knots below the clip. You can leave the plant holder as is, or form a third level of knots, as before. 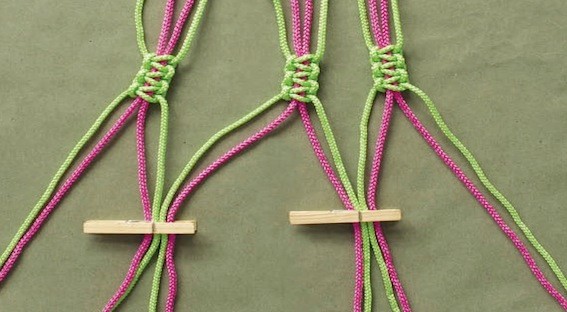 10. Slide all your cords through another PVC pipe coupling. Divide the cords into two sections and make a couple of knots to secure the PVC pipe coupling. Decorate the ends however you’d like, then burn the cords’ cut ends. Hang your planter from a ceiling hook and admire.

By Molly Simms and Lan Truong

This story appears in the Oct/Nov 2013 issue
of BUST Magazine with Neko Case.

Tags: Crafty , Crafts , DIY , from the magazine , retro , make it yourself , plant hanger , macrame , Home Depot
Support Feminist Media!
During these troubling political times, independent feminist media is more vital than ever. If our bold, uncensored reporting on women’s issues is important to you, please consider making a donation of $5, $25, $50, or whatever you can afford, to protect and sustain BUST.com.
Thanks so much—we can’t spell BUST without U.