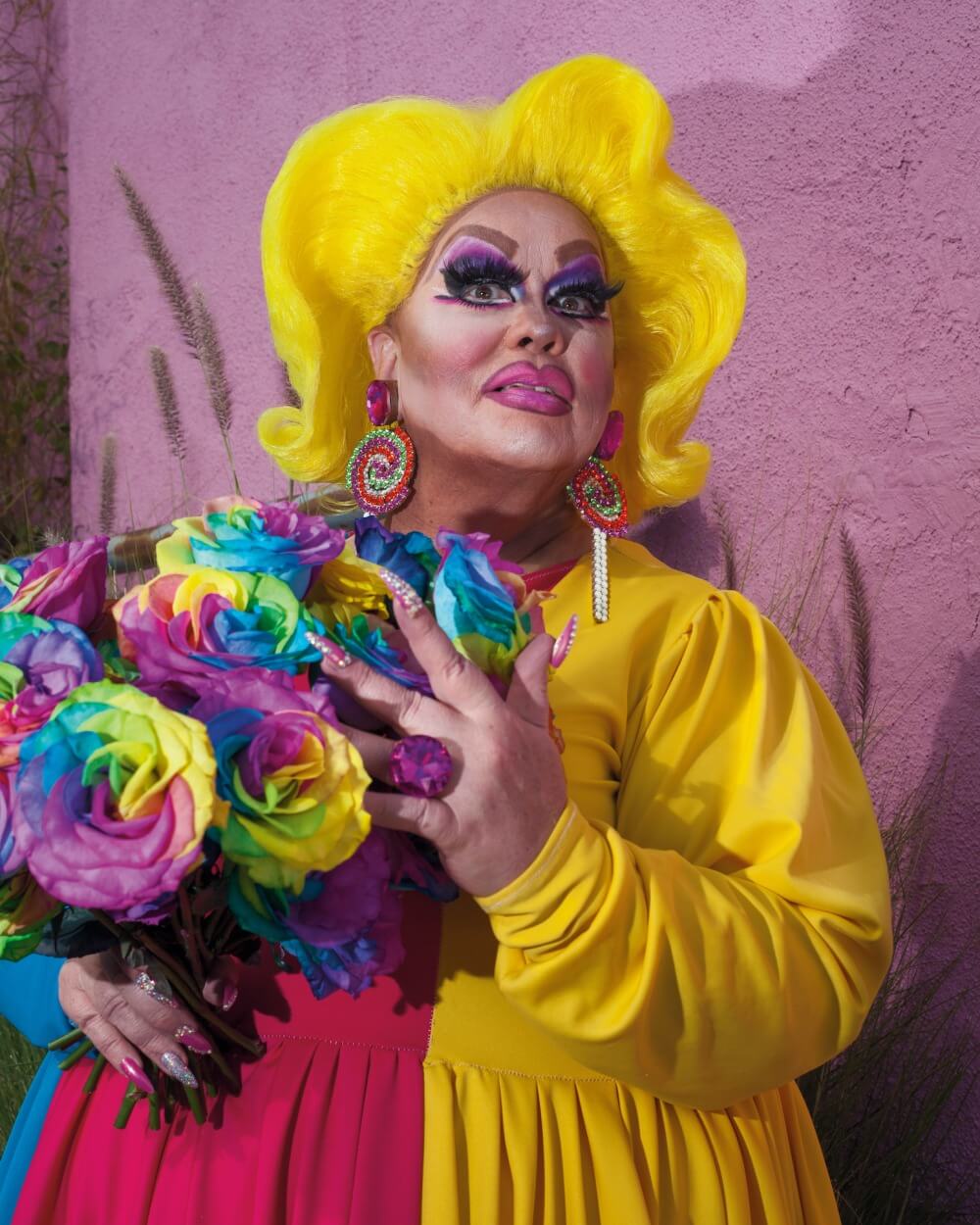 "There is so much more to drag than what you see on television."–LA drag queen Psycadella Facade.

If the scope of your drag knowledge starts and ends with RuPaul's Drag Race,, a few drag brunches, and bachelorette parties, you're doing yourself a disservice. TV shows like RuPaul's Drag Race helped bring drag from the underground to the cultural mainstream, but have also drawn criticism from queer and drag communities into what drag is, was, and could be. From Brooklyn based artist and lifelong drag performer Harry James Hanson and San Francisco based writer and floral stylist Devin Antheus comes Legends of Drag: Queens of a Certain Age—a stunning 240-page photo book and rich archive of living drag history, that seeks to widen the narrower ideas of the art form, expand the world's knowledge of the roots of drag and gay liberation, and reinvigorate the value of acknowledging/honoring our trailblazing queer elders.

Authors Hanson and Antheus traveled across the U.S. hitting 16 different cities to meet with and photograph a whopping 81 drag pioneers, some of whom passed away soon after their interviews took place. Hanson served as the book’s photographer, capturing the queens’ larger-than-life personas in striking portraits complete with Antheus’ custom floral arrangements. The accompanying biographies offer a window into these drag legends’ groundbreaking journeys; the hardships, the joy, the bliss and the grit.

The biographies are full of anecdotes from the icons themselves, soundbites that showcase their charisma, wit, and at times, their knack for hyperbole.

“Tony Danza came to see my show once. I sat on his lap and he got a boner. He still follows me on Instagram,” LA icon The Goddess Bunny said. Sadly, the queen passed away January 2021, but like many, her essence was captured within the pages of this book. Hanson and Antheus said the last time they spoke with her, Goddess Bunny said she’d just befriended the director of the CIA while on Brad Pitt’s Instagram. “I’ve known Brad since he was a twink! We were both twinks!” Bunny added.

But it wasn’t just performative storytelling that made the profiles interesting—the queens were also vulnerable. They shared stories of devastating loss from the AIDS epidemic and substance abuse. Like Dallas drag queen Tasha Kohl, who was very open about her “demons and struggles with anxiety and depression.”

“I was a desperate alcoholic and addict. I disappeared from the craft for a decade because of that,” Tasha shared. “Then the late eighties and nighties hit, when all my friends dropped dead around me, and it took me to a really dark place. When I finally got some help, I had to learn to reprogram my brain when it tries to go to those dark places.” She credits drag as essential to her healing process: “When I get creative and put myself to work, there’s no room for the darkness.”

The book also highlights the queer community’s endurance of constant police brutality, and how the compounding abuse led to the pushback that sparked the gay liberation movement.

Houston legend Dina Jacobs puts it plainly: “Who fought hardest for our gay pride? The drag queens. And they were drag queens—I don’t care what anybody says. Who was there doing all the benefits for AIDS, back in the eighties? The drag queens…There were so many trials and tribulations back in the sixties, but we didn’t care. We’d get beat up by the cops and all that. It was a nightly thing. But we didn’t worry about the repercussions—we just did what we wanted to do with our lives.” 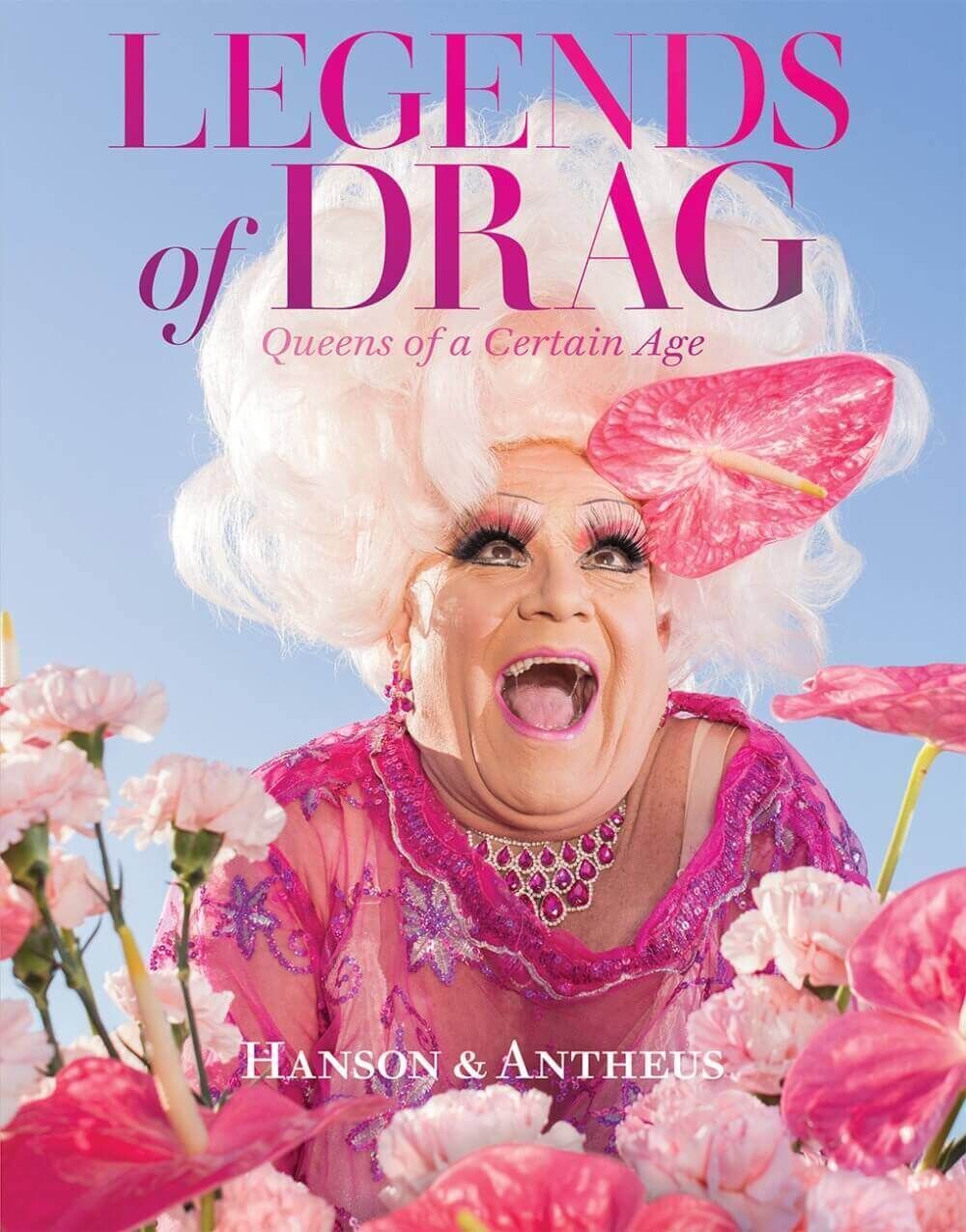 The book shares the types of “draconian methods used to police queens” back in the day–like in Oregon, needing to wear two articles of men’s clothing under your drag or you’d go to jail immediately, or in Hawaii, where it was required “that men performing in drag had to wear a sign that said, ‘I am a boy.’” If the queens were caught without their signs, “they faced hefty fines due to an ‘intent to deceive’ clause in Hawaii’s disorderly conduct statute.” Antheus and Hanson emphasize that clubs and private homes were not that much safer, since “the clubs were subject to frequent raids, as were the queens’ homes—the cops knew where each of them lived.”

“The cops were really ugly to the drags, but there were some cops who were going with the drags at the same time,” queen Dina Jacobs added. “As long as nobody saw, they were good with it. I want people to know what we went through in the sixties, because it wasn’t just my life. It was everybody around me. We all went through the same thing. We were fighting all of this bigotry before Stonewall; we were doing all of it.”

Ultimately, the elder’s stories are ones of survival, and ones that need to be relayed and heard. From the trans women that started the Compton Cafeteria Riots and the Stonewall Inn Uprising (hey Marsha) that catapulted the gay liberation movement, to serving the community virus after virus that continue to devastate marginalized communities the most, Legends of Drag is a reminder of how important it is to pay tribute and listen to the drag queens and queer icons that paved the way. With this book, Hanson and Antheus hope to foster intergenerational communication.

SF queen Renita Valdez expressed this need for transmission in her profile: “I have done things that you have not done. Young people need to understand what we went through.” The authors add, “In SF, those who hold the stories of the old city, quite literally ghost stories, are becoming rare creatures. Especially within those communities who’ve lost entire generations of elders to AIDS and the biopolitical nightmare the disease wrecked upon the city throughout its first decades. Having borne witness to the transformations and resiliency of the queer undercurrents over the better half of the last century, Renita stands as a mediator between the living and the dead.”

Although drag as an art form is ephemeral and transcends distinct genres, the book highlights that there are common threads that are tightly woven within drag’s foundation, and that is the principles of community, activism, and service.

“Fundraising is really why I started performing,” New Orleans queen Moanalot Fontaine said. “I reached a point in my twenties when I had to get all new friends because all of mine died.”

NYC drag queen Coco LaChine recalls how her community had to come together and raise money for bail funds and to help people financially due to the constant police raids. “We had to fight for ourselves,” Coco said. “If we don’t help our own communities, nobody is going to help us. We saw this especially during the AIDS crisis. So, we put some differences aside and worked together.” 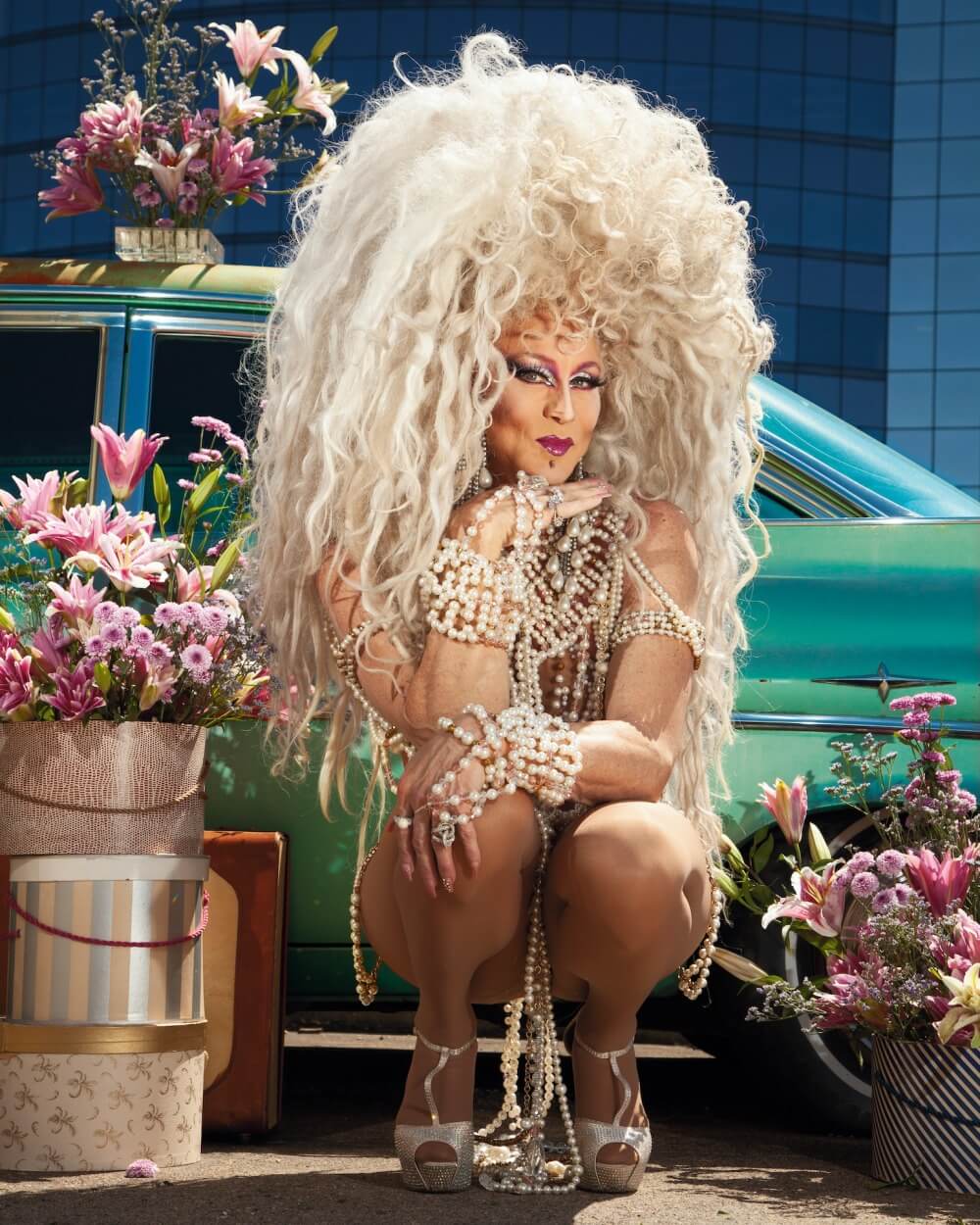 In the book’s introduction, the authors highlight how “Drag Race signaled a type of revolution for the drag-industrial complex” by “bringing one version of the art form to an exponentially wider audience while also promising previously unthinkable career opportunities for a new echelon of performers.” The opinions on the show vary and reach both ends of the spectrum, but many share in a feeling of alienation due to televised drag's focus on competition and omission of “the spirit of collaboration,” which many queens believe is what makes traditional competitive pageants and balls possible. With the rise of televised drag, DIY YouTube tutorials, and social media influencer culture, many older queens are concerned about a lack of sisterhood and community.

“These days everyone is out for themselves. Everyone is so cutthroat now,” Milwaukee queen Shannon Dupree said. The authors added how “she lamented the way Drag Race has, in her words, diminished the art form…she worries about new girls modeling their performances off what they see on television, rather than learning the actual craft of drag.” Shannon explains, “Everyone wants a shortcut but doesn’t want to use the foundation—the padding, the tucking, the paint—we’ve established. They think we are old school, but it’s just the right way to do it.” 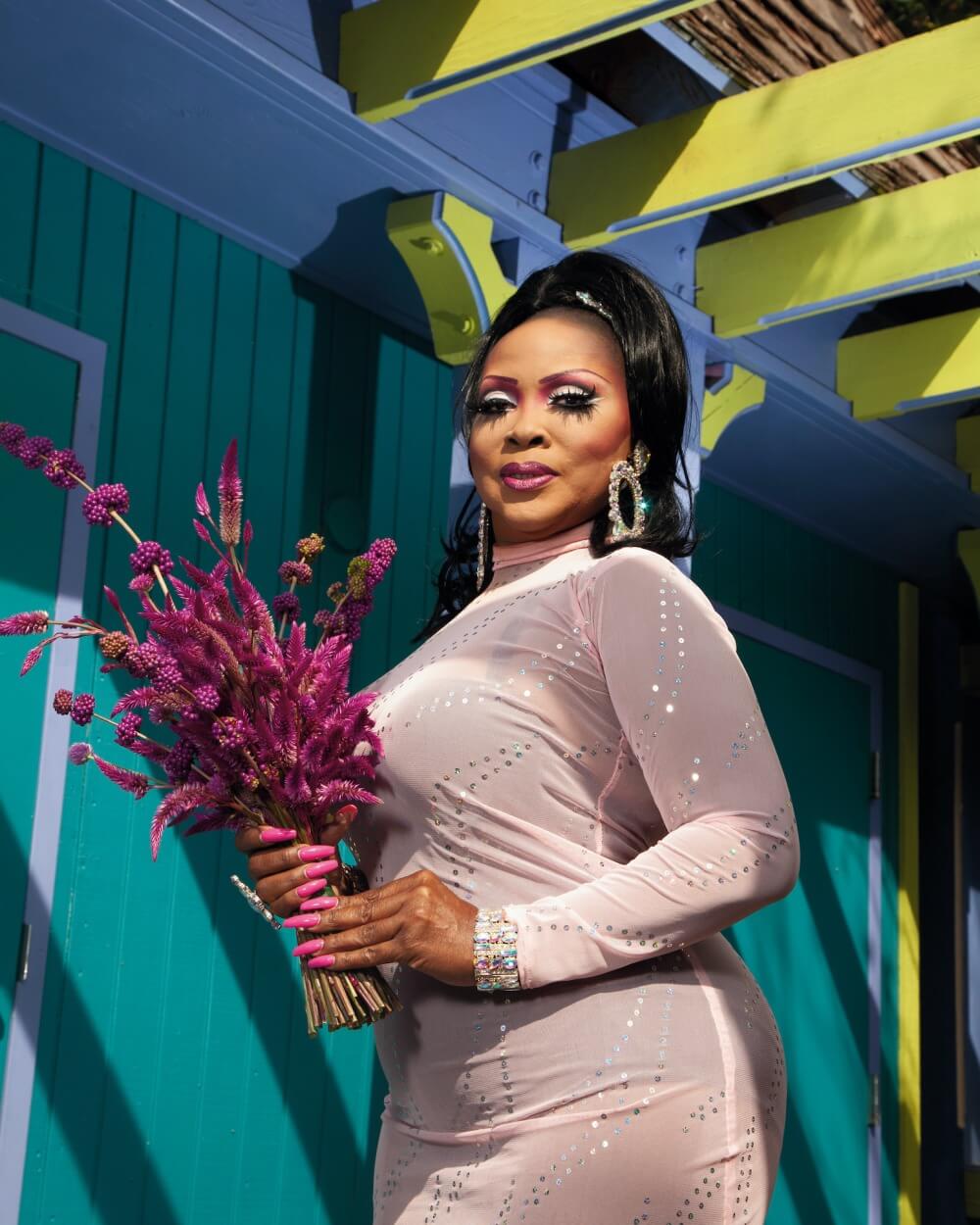 Throughout the book, the definition of drag is strengthened, not so much by providing more precision, but by emphasizing that drag, in its purest form, is uncategorizable. LA legends The Fabulous Wonder Twins reminisce of a club they used to hit as teens: “There we met other fellow weirdos, a gathering of fabulous people. We felt at home.” The Twins would  create outfits inspired by anime and superheroes, “but always with a super gay kinda look. We’d show up at the nightclubs wearing bodysuits with laser guns. We knew how to accessorize, let me tell you that!...Drag is all about empowerment. When you put on a wig and some makeup you feel so powerful.”

The direct and intimate way the elder queens spoke makes it easy to feel like you’re just sitting with them at a Hollywood vanity mirror as they get ready for a show: they’re skillfully beating their face to the gods and rehashing their past, and you—like a drag daughter fervently listening to their drag mother—are hanging on every word, extracting inescapable wisdom that you are privileged to walk away with.

Within the profiles, the direct quotes from the queens were balanced with Antheus and Hanson’s historical context. The result was a supremely long but rich archive that is definitely meant for the coffee table. The book is challenging to read in one sitting, and is most useful as a text to keep returning to when wanting to add to your body of queer knowledge. Through its attention to archiving drag history and capturing the precious and fleeting moments with our queer elders, Legends of Drag will go down in history itself. It is essential reading, and in this day and age, when LGBTQ+ literature, chronicles, and history are being banned, this book is more important than ever.

Legends of Drag is on sale now.